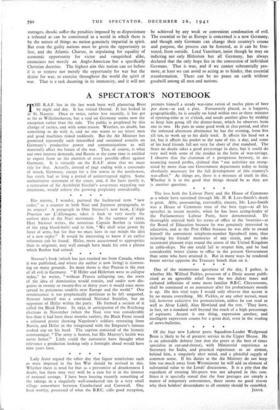 Page 4, 26 December 1941 — Strasser's book (which has just reached me from Canada, where
Close

Strasser's book (which has just reached me from Canada, where

it was published, and where the author is now living) is interest- ing on many grounds. Its main thesis is that Prussia is the root of all evil in Germany. " If Hitler and Hitlerism were to collapse today," he writes, " without Prussia collapsing too, the roots of the idea of domination would remain, and under new dis- guises in twenty or twenty-five or thirty years it would once more spread its poisonous tendrils over Europe and the world." One reminiscence is too prophetically pertinent to be left unquoted. Strasser himself was a convinced National Socialist, but an opponent of Hitler within the party. He formed a section of it called the Black Front. In 1932, in anticipation of the Reichstag elections in November (when the Nazi vote was considerably less than it had been three months earlier), the Black Front issued a coloured poster showing Napoleon's soldiers retreating from Russia, and Hitler in the foreground with the Emperor's famous cocked cap on his head. The caption consisted of the historic communiqué, "The army is beaten, but His Majesty's health was never better." Little could the cartoonist have thought what relevance a prediction looking only a fortnight ahead would have nine years later.