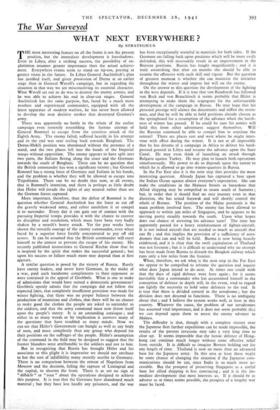 The War Surveyed WHAT NEXT EVERYWHERE ?

TRE most interesting feature on all the fronts is not the present position, but the immediate development it foreshadows. Even in Libya, after a striking success, the possibility of ex- ploitation assumes greater importance than the actual achieve- ment. Everywhere events seem to stand on tip-toe, peering at greater vistas in the future. In Libya General Auchinleck's plan has justified itself, and given possession of Derna at an earlier stage than in General Wavell's campaign, but in regarding the situation in that way we are misconceiving its essential character. What Wavell set out to do was to destroy the enemy armies, and he was able to achieve his end in clear-cut stages. General Auchinleck has the same purpose, but, faced by a much more resolute and experienced commander, equipped with all the latest apparatus of modern warfare, he has never been allowed to develop the neat decisive strokes that destroyed Graziani's army.

There was apparently no battle in the whole of the earlier campaign even remotely resembling the furious attempt of General Rommel to escape from the ceaseless attack of the Eighth Army. The enemy failed, suffered heavily in his attempt and in the end was sent reeling back towards Benghazi. The Derna-Mekili position was abandoned without the pretence of a stand, and the two places fell into the hands of the Imperial troops without opposition. The enemy appears to have split into two parts, the Italians fleeing along the coast and the Germans towards the south of Benghazi. There can be no question that the British commander has won a significant victory ; but General Rommel has a strong force of Germans and Italians in his hands, and the problem is whether they will be allowed to escape into Tripolitania. There can be no doubt that now, at all events, that is Rommel's intention, and there is perhaps as little doubt that Hitler will invade the rights of any neutral rather than see the German forces captured.

More important, therefore, than the defeat of Rommel is the question whether General Auchinleck has the force to cut off the gravely weakened army, and either annihilate it or compel it to surrender. Every day it can gain out of contact with the pursuing Imperial troops provides it with the chance to recover its discipline and resolution, which must have been very badly shaken by a month's heavy attack. Yet the past weeks have shown the versatile courage of the enemy commander, even when faced by a superior force freshly concentrated to pay off old scores. It can be assumed that the British commander will exert himself to the utmost to prevent the escape of his enemy. His recently published instructions to General Ritchie show that he is inspired by the spirit that makes the successful general ; but upon his success or failure much more may depend than at first appears.

A similar question is posed by the victory of Russia. Rarely have enemy leaders, and never have Germans, in the midst of a. war, paid such handsome compliments to their opponent as were contained in the appeal of Goebbels. What is one to make of admissions that would have ruined a democratic government? Goebbels openly admits that the campaign did not follow the expected lines, that completely insufficient provision was made for winter fighting, that there was no proper balance between the production of munitions and clothes, that there will be no chance to make good the clothes the people are asked to surrender to the soldiers, and that the army command must now throw itself upon the people's mercy. It is an astounding cataiogue ; and either in so many words or by implication it answers many of the questions that have troubled so many minds. Now we can see that Hitler's Government can bungle as well as any body of men,- and more completely than any group who depend for their positions on the suffrages of the people. Hitler's assumption of the command in the field may be designed to suggest that the former blunders were attributable to the soldiers and not to him.

But in recognising that Russia has brought Hitler and his associates to this plight it is imperative we should not attribute to her the sort of infallibility many secretly ascribe to Germany. There is no comparison between the retreat of Napoleon from Moscow and the decision, failing the capture of Leningrad and the capital, to shorten the front. There is as yet no sign of " dad& " or " rout " about the operations designed to achieve this purpose. It is true that the Germans have abandoned much material ; but they have lost hardly any prisoners, and the war

has been exceptionally wasteful in materials for both sides. If the Germans are falling back upon positions which will be more easily defended, this will necessarily result in an improvement in the Russian positions. Russia has fought magnificently ; and it is truly astonishing that after six months she should be able to assume the offensive with such skill and vigour. But the question of greatest moment is whether she can maintain the initiative throughout the winter and impose her will on the enemy.

On the answer to this question the development of the fighting in the west depends. If it is true that von Rundstedt has followed von Bock and von Brauchitsch it seems probable that Hitler is attempting to make them the scapegoats for the unfavourable development of the campaign in Russia. He may hope that his personal prestige will silence the discontents and stiffen the resist- ance, and that he will be able to hold positions already chosen as the springboard for a resumption of the advance when the harsh- ness of winter has passed. If he could be sure his armies will hold this front other adventures suggest themselves. Will the Russian command be able to compel him to continue the retreat? There are places east and west where he might inter- vene with effect during the winter. It is not at all impossible that he has dreams of a campaign in Africa to deliver his hard- pressed general in Libya and resume the advance upon the Suez Canal. He may even think of launching an attack through Bulgaria against Turkey. He may plan to launch both operations simultaneously. His power to do so depends upon the extent to which he is allowed to go into winter-quarters in Russia.

In the Far East also it is the next step that provides the most interesting question. Already Japan has captured a base upon the Indian Ocean against almost everyone's expectation. She can make the conditions in the Malacca Straits so hazardous that Allied shipping may be compelled to steam south of Sumatra ; but, in order that it should find no easy journey even in that direction, she has seized Sarawak and will shortly control the whole of Borneo. The position of the Malay peninsula is the main problem involved here. The enemy has been allowed to approach to within 30o miles of Singapore, and he appears to be moving pretty steadily towards the south. Upon what hopes does our chance of arresting his advance turn? The time has apparently passed for a heavy reinforcement of fighter-aircraft. It is not indeed aircraft that are needed so much as aircraft that can fly ; and this implies the provision of a sufficiency of aero- dromes that can and will be held. Burma is now being heavily reinforced, and it is clear that the swift capitulation of Thailand was not foreseen ; but it is difficult to understand why no attempt has been made from Burma to disturb the Bangkok railway which runs only a few miles from the frontier.

When, therefore, we ask what is the next step in the Far East we appear to be compelled to reframe the question and inquire what does Japan intend to do next. At times one could wish that the days of rigid defence were here again ; for it seems inevitable that a commander who has accustomed himself to the conception of defence in depth will, in the event, tend to regard too lightly the necessity to hold some defences to the end. It is true that there is divided control in the aerodrome ; but the division does not descend to functions. There is no ambiguity about that ; and I believe the system works well, at least in this country. Whatever the cause, the problem of our aerodromes has assumed vital importance, and it does not seem probable that we can depend upon them to arrest the enemy advance in Malaya.

The difficulty is that, though with a complete victory over the Japanese fleet further expeditions can be made impossible, the results of the present invasions may take a very long time to clear up. It seems impossible that the heroic defence of Hong- kong can continue much longer without some effective relief from outside. It is difficult to imagine Borneo holding out for any length of time. Thailand is now no more than an advanced base for the Japanese army. In this area at least there might be some chance of changing the situation if the Japanese com- munications should be cut, since India is so much more ac- cessible. But the prospect of preserving Singapore as a useful base for allied shipping is less convincing ; and it is the im- mediate development that most interests us. If it should be as adverse as at times seems possible, the prospect of a lengthy war must be faced.