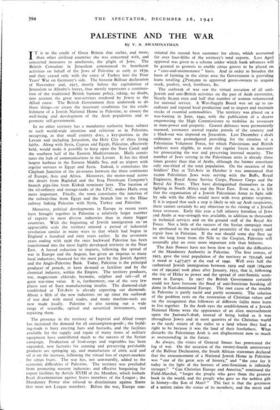 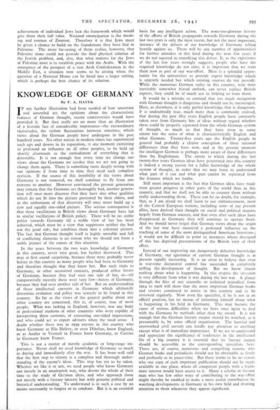 PALESTINE AND THE WAR

IT is to the credit of Great Britain that earlier, and more, than other civilised countries she was concerned with, and concerted measures to ameliorate, the plight of Jews. The British Consulate in Jerusalem commenced its beneficent activities on behalf of the Jews of Palestine as early as 1839, and they ceased only with the entry of Turkey into the Four Years' War on Germany's side. The historic Balfour declaration of November 2nd, 1917, shortly before the capitulation of Jerusalem to Allenby's forces, thus merely represents a continua- tion of the traditional British humane policy, taking, no doubt, into account the great war-services rendered by Jewry to the Allied cause. The British Government then undertook to do three things—to create the necessary conditions for the estab- lishment of a Jewish National Home in Palestine, to ensure the well-being and development of the Arab population and to -promote self-government.

In no other territory has a mandatory authority been subject to such world-wide attention and criticism as in Palestine, occupying, as that small country does, a key-position in the Levant and including Jerusalem, the Holy City of three living faiths. Along with Syria, Cyprus and Egypt, Palestine, effectively held, would make it possible to keep open the Suez Canal and the southern half of the Eastern Mediterranean. Haifa consti- tutes the hub of communications in the Levant. It has the third largest harbour in the Eastern Middle Sea, and an airport with regular services to Egypt and Syria. Indeed, it constitutes the Clapham Junction of the air-routes between the three continents of Europe, Asia and Africa. Moreover, the motor-road across the desert from Baghdad and the Iraq Petroleum Company's branch pipe-line from Kirkuk terminate here. The location of the oil-refinery and storage-tanks of the I.P.C. makes Haifa even more important. Finally, the town constitutes the junction of the railway-line from Egypt and the branch line to the Hijaz railway linking Palestine with Syria, Turkey and Palestine.

Moreover, political developments in Europe in recent years have brought together in Palestine a relatively larger number of experts in most diverse industries than in many bigger countries. With the beginning of Jewish immigration on • an appreciable scale the territory entered a period of industrial revolution similar in many ways to that which had begun in England a hundred and sixty years earlier. In the seventeen years ending with 1936 the once backward Palestine has been transformed into the most highly developed territory in the Near East. A forced reduction in imports, following the spread of war in Europe and the Aegean, has given an impetus to many local industries, financed for the most part by the Jewish Agency and the Anglo-Palestine Bank. Today, Palestine is the principal producer of potash, in keen demand as fertiliser and by the chemical industry, within the Empire. The territory produces, too, magnesium chloride, bromine, sulphur and salt—all of great war-time value. It is, furthermore, one of the very few places east of Suez manufacturing insulin. The diamond-club established at Tel-Aviv is already exporting cut diamonds. About a fifth of the new industries set up since the outbreak of war deal with metal trades, and many machine-tools are now made locally. Palestine is also turning out a wide range of scientific, optical and acoustical instruments, and repairing them.

The presence in the territory of Imperial and Allied troops has increased the demand for all consumption-goods ; the build- ing-trade is busy erecting huts and barracks, and the facilities available for the supply and repair of many items of military equipment have contributed much to the success of the Syrian campaign. Production of food-crops and vegetables has been expanded, new factories for canning and preserving perishable products are springing up, and manufacture of citric acid and oil is on the increase, following the virtual loss of export-markets for citrus fruits. The war has, not unnaturally, added to the economic difficulties of Palestine. The territory was precluded from protecting nascent industries and effective bargaining for export facilities by Article XVIII of the Mandate, which forbade fiscal discrimination against States members of the League ; the Mandatory Power also refused to discriminate against States that were not League members. Before the war, Europe con- stituted the second best customer for citrus, which accounted for over four-fifths of the territory's total exports. Last April approval was given to a scheme under which bank advances will be granted to growers to enable citrus groves to be placed on a " care-and-maintenance " basis. And in order to broaden the basis of farming in the citrus area the Government is providing loans totalling LPtoo,000 to approved grove-owners to acquire stock, poultry, seed, fertilisers, &c.

The outbreak of war saw the virtual cessation of all anti- Jewish and anti-British activities on the part of Arab extremists. Nearly 8o,000 men and half that number of women volunteered for national service. A War-Supply Board was set up to co- ordinate and expand local production and to import and maintain stocks of essential commodities. The territory was placed on a war-footing in June, 1940, with the publication of a decree empowering the High Commissioner to mobilise its resources in man-power and property. Coastal defences were permanently manned, yeomanry started regular patrols of the country and a black-out was imposed on Jerusalem. Last December a draft ordinance was promulgated providing for the creation of a Palestinian Volunteer Force, for which Palestinians and British subjects were eligible, to assist the regular forces in measures for prosecuting the war and preserving internal security. The number of Jews serving in the Palestinian units is already three times greater than that of Arabs, although the former constitute only one-third of the total population. On the occasion of the Soldiers' Day at Tel-Aviv in October it was announced that 10,000 Palestinian Jews were serving with the Buffs, Royal Engineers, Royal Army Service Corps, Pioneer Corps and the Royal Air Force. They have distinguished themselves in the fighting in North Africa and the Near East. Even so, it is felt that the organisation of a Jewish Palestinian Army to fight side by side with the Allies would meet with even greater response. If it is argued that such a step is likely to stir up Arab suspicions, there cannot certainly be any objection to the raising of a Jewish force overseas. Early this year a full infantry battalion of Jews and Arabs at war-strength was available, in addition to thousands in technical services and on the ground staff of the Royal Air Force. Not a little of the success of the Syrian campaign must be attributed to the usefulness and proximity of the supply and repair base in Palestine. If the war should some day flare up on the long front from the Nile to the Caspian, Palestine will assuredly play an even more important role than hitherto.

The Axis Powers have not been slow to exploit the difficulties of the Mandatory Authority in Palestine. The first census, of 1922, gave the total population of the territory as 752,048, and it stood at 1,477,977 at the end of 1940. Well over half the authorised Jewish immigration between 1919 and 1936 (164,000 out of 290,000) took place after January, 1933, that is, following the rise of Hitler to power and the spread of anti-Semitic senti- ment in Europe. In 1917 the British Government certainly could not have foreseen the flood of anti-Semitism breaking all dams in Nazi-dominated Europe. The root cause of the trouble in Palestine is partly racial and partly economic. The solution of the problem rests on the restoration of Christian values and on the recognition that followers of different faiths must learn to live together. In the Arab eyes the establishment of a Jewish National Home wore the appearance of an alien encroachment upon the laziraftel-Arab, instead of being hailed as it was throughout Jewry and in most quarters of the Christian world as the tardy return of the exiles to a land where they had a right to be because it was the land of their forefathers. What disturbs the Palestinian Arab is not displacement now so much as overcrowding in the future.

As always, the vision of General Smuts has penetrated the fog of war. On the occasion of the twenty-fourth anniversary of the Balfour Declaration, the South African statesman declared

that the announcement of a National Jewish Home in Palestine was " one of the great acts of history," and " the case for it

today in the light of the horrors of anti-Semitism is infinitely stronger." " Can Christian Europe and America," continued the Field-Marshal, " forget the people who gave them the greatest

book in the world, and the people who gave us the noblest gift in history—the Son of Man? " The fact is that the greatness of a nation raises the status of its members, and the merit and

achievement of individual Jews lack the framework which would give them their full value. National emancipation is the mean- ing and essence of Zionism. Therefore it is that Jews must be given a chance to build on the foundations they have laid in Palestine. The more far-seeing of them realise, however, that Palestine alone could not provide the final physical solution of the Jewish problem, and, also, that what matters for the Jews of Palestine most is to establish peace with the Arabs. With the emergence of the prospect of a vast Arab Confederation in the Middle East, a situation now seems to be arising when the question of a National Home can be fitted into a larger setting, which is perhaps the best chance of its solution.