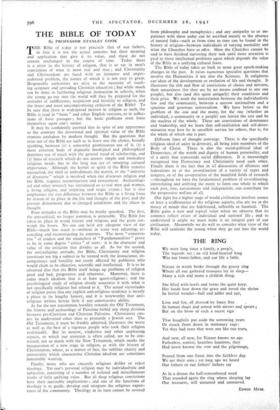 THE BIBLE OF TODAY

THE Bible of today is not precisely that of our fathers, in that it is not the actual contents but their meaning and application that give it its value, and these do not remain unchanged in the course of time. Today there is a crisis in the history of religion, that is to say in men's convictions of what is most real and true ; and Christianity and Christendom are faced with an immense and unpre- cedented problem, the nature of which it is not easy to grasp. Responsible authorities are alive to the necessity of teach- ing scripture and spreading Christian education ; but while much can be done in furthering religious instruction in schools, when the young go out into the world will they be prepared for the attitudes of indifference, scepticism and hostility to religion, and the freest and most uncompromising criticism of the Bible? To be sure that there is widespread interest in religion as such, the Bible is read in " basic " and other English versions, or in collec- tions of basic passages ; but the basic problems soon force themselves upon one's notice.

It may be confidently asserted that in spite of any appearance to the contrary the devotional and spiritual value of the Bible remains unshaken by modern thought. But the questions that arise out of the Bible are such as to leave one the choice, broadly speaking, between (1) a somewhat promiscuous use of it, (2) a more coherent body of dogmatic theological and philosophical doctrines out of touch with the general trend of scholarship, and (3) lines of research which do not answer simple and immediate religious needs, but in the long run are of sweeping cultural importance. Although the kernel or spirit of the Bible remains untouched, the shell or embodiment, the matrix, or the " universe of discourse " which is involved when one discusses religion and the Bible, requires reconstruction and restatement. Archaeologi- cal and other research has introduced us to real men and women, a living religion, and inspiring and tragic events ; but it also emphasises the vast difference between the Bible as a living force by reason of its place in the life and thought of the past, and the present disharmony due to changed conditions and the chaos in thought.

Four attitudes to the Bible may be briefly specified. The first, the anti-critical, no longer common, is untenable. The Bible has taken its place in world history and religion, and the gains out- weigh the losses. No one can hold any adequate view of the Bible—much less teach it—without in some way adjusting, re- conciling and reconstructing its contents. The most " conserva- tive " of readers and the staunchest of " Fundamentalists " prove to be in some degree " critics " of sorts: it is the character and value of the criticism that divides us all. As for the second, the anti-religious attitude, the Bible, Christianity and religion constitute too big a subject to be treated with the insouciance, in- competence and hostility not rarely affected by publicists who would claim to be objective, scientific and intellectual. It is to be observed also that the Bible itself brings up problems of religion good and bad, progressive and otherwise. Moreover, there is today much idealism that is at least quasi-religious ; and the psychological study of religion closely associates it with what is not specifically religious but related to it. The actual vicissitudes of religion prove that any explicit anti-religious tendency is merely a phase in its lengthy history, and it is noteworthy that anti- religious writers betray little if any constructive ability.

As for the not uncommon hostility towards the Old Testament, the history and archaeology of Palestine forbid any sharp division between pre-Christian and Christian Palestine. Christianity can- not be understood other than as primarily a Jewish sect. The Old Testament, it must be frankly admitted, illustrates the worst as well as the best of a vigorous people who took their religion realistically. But its narrow, vindictive and other unpleasing aspects, to which our attention is often called, are to be con- trasted, not so much with the New Testament, which marks the inauguration of a new stage in religion, as with the history of Christendom, where, as a matter of fact, the sublime charity and universality which characterise Christian idealism are sometimes lamentably wanting.

Finally, many who are sincerely religious dislike or reject theology. Yet one's personal religion may be individualistic and subjective, consisting of a number of isolated and miscellaneous truths of little unifying value. But all deep religious convictions have their inevitable implications ; and one of the functions of theology is to guide, develop and integrate the religious experi- ences of the community. Theology in its turn cannot be severed from philosophy and metaphysics ; and any antipathy to or im- patience with these today can be ascribed mainly to the absence of natural links—such as from time to. time can be found in the history of religion—between individuals of varying mentality and what the Churches have to offer. Here the_ Churches cannot be said to have finished surveying their task until more attention is paid to those intellectual problems upon which depends the value of the Bible as a unifying cultural force.

The Bible of today takes us back to some great epoch-making changes in the past. It raises numerous specialist questions that involve the Humanities if not also the Sciences. It enlightens cur ideas of the development or evolution of life and thought. It illustrates the ebb and flow of convictions of choice and mission, their naturalness (for they are by no means confined to any one people), but also (and this quite uniquely) their conditions and their price. We mark the interrelation between the individualistic few and the community, between a narrow nationalism and a spacious and generous universalism. We have before us the problem of the one and the many, for the one (whether an individual, a community or a people) can leaved the rest and be the nucleus of the whole. There are convictions of dominance and leadership, and we learn that self-realisation and self-deter- mination trdy best lie in unselfish service for others, that is, for the whole of which one is part.

Different lines of thought converge. There is the specifically religious ideal of unity in diversity, all being joint members of the Body of Christ. There is also the social-political ideal of Democracy, of the worth and dignity of human personality, and of a unity that transcends social differences. It is increasingly recognised that Democracy and Christianity need each other. Finally there is the fact that in all discussions of alliances and federations or of the co-ordination of a variety of types and tempers, or of the co-operation of the manifold fields of research —throughout we have the fundamental problem of co-ordinating, interrelating and unifying the many to form one whole to which each part, free, autonomous and independent, can contribute for the progressive welfare of all.

Our fight for a higher stage of world civilisation involves sooner or later a reaffirmation of the religious aspects, else are we at the mercy of minds that are hidebound, inflexible or fanatical. The Bible gains a new and topical value when we observe that its contents reflect crises of individual and national life ; and to understand it aright we must make it an integral part of our civilisation. Meanwhile we do well to consider what view of the Bible will confront the young when they go out into the world today.