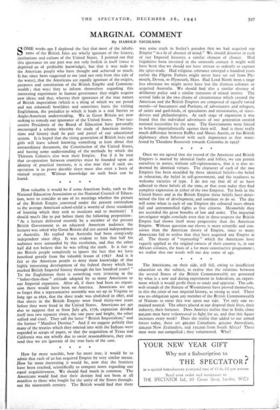 How valuable it would be if some American body, such

as the National Education Association or the National Council of Educa- tion, were to consider at one of its meetings whether the picture of the British Empire .conveyed under the present curriculum to the average American school-child is worthy of those standards of learning which they seek to inculcate and to maintain! I should muci:1 like to put before them the following proposition : " At a lecture delivered recently by a member of the present British Government to an educated American audience the lecturer was asked why Great Britain did not accord independence to Australia. He replied that Australia had been completely independent since 1855. It was evident to him that half his audience were astounded by this revelation, and that the other half did not believe that he was telling the truth. Is it fair to the British people completely to ignore the fact that we have benefited greatly from the valuable lesson of 1782? And is it fair to the American, people to deny them knowledge of that highly interesting development of the federal theory which has marked British Imperial history through the last hundred years? " To the Englishman there is something very irritating in the " holier-than-thou " attitude adopted by so many Americans to our Imperial expansion. After all, if there had been no expan- sion there would have been no America. Americans are apt to forget that a representative assembly was set up in Virginia so long ago as 1621, that the slave trade was abolished in 1807, and that slaves in the British Empire were freed thirty-two years before they were freed in the United States. Americans are apt also to suppose that as from July 4th, 1776, expansion divided itself into two separate rivers, the one pure and bright, the other sullied and cruel. They call the latter " British Imperialism," and the former " Manifest Destiny." And if we suggest politely that many of the treaties which they entered into with the Indians were regarded as scraps of paper, or that the acquisition of Texas and California was not wholly due to sweet reasonableness, they con- tend that we are ignorant of the true facts of the case.