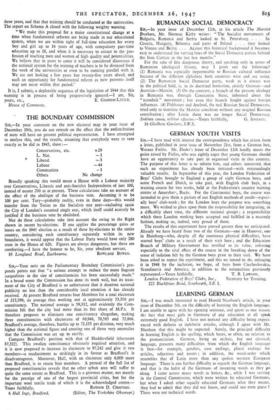 Sta,—I have read with interest the correspondence which has arisen from a letter, published in your issue of November 21st, from a German boy, Werner Fielits. Mr. Duder's letter of December 12th hardly meets the point raised by Fielits, who was rightly eager that young Germans should have an opportunity to take part in organised visits to this country. The purpose of this letter is to inform him, and others interested, that such an experiment has already been initiated—with outstandingly valuable results. In September of this year, the London Federation of Boys' Clubs brought to England a group of eight German boys, and some French and Dutch, to take part, with English club boys, in a training course for two weeks, held at the Federation's country training centre at Amersharr, Bucks. For the Continental boys, the course was intended to give them a picture of our English methods of youth—especi- ally boys' club-work ; for the London boys the purpose was something more. We wished to place upon them the responsibility for integrating, in a difficultly short time, the different national groups ; a responsibility which these London working boys accepted and fulfilled in a masterly fashion, making us, indeed, very proud of them.

The results of this experiment have proved greater than we anticipated. Already we have heard from two of the Germans—one in Hanover, one in Hamburg—who, despite all the enormous physical difficulties, have started boys' clubs as a result of their visit here ; and the Education Branch of Military Government has testified to its value, referring especially to the vital effect of the course in the breaking down of the sense of isolation felt by the German boys prior to their visit. We have been asked to repeat the experiment, and this we intend to do, enlarging it in 1948 by the inclusion, we hope, of boys from Czechoslovakia, Scandinavia and America, in addition to the nationalities previously London Federation of Boys' Clubs, Inc., Secretary for Training. 222 Blackfriars Road, Southwark, S.E. 1.