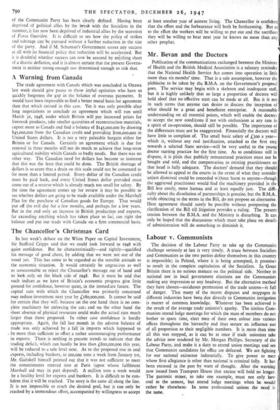 The decision of the Labour Party to take up the Communist challenge seriously at last is very timely. A truce between Socialists and Communists as the two parties define themselves in this country is impossible; in Poland, where it is being attempted, it promises to result in the complete capitulation of the Socialists. In Great Britain there is no serious menace on the political side. Neither in national nor in local government elections are the Communists making any impression or any headway. But the alternative method they have chosen—assiduous permeation of the trade unions—is full of danger. That many of the recent disputes and stoppages in different industries have been due directly to Communist instigation is matter of common knowledge. Whatever has been achieved is the result of the average trade unionist's apathy. The tireless Com- munists attend lodge meetings for which the mass of members do not bother to spare time, elect men of their own colour into various offices throughout the hierarchy and thus secure an influence out of all proportion to their negligible numbers. It is more than time all this was stopped, as it can be at once if trade unionists take the advice now tendered by Mr. Morgan Phillips, Secretary of the Labour Party, ind make it a duty to attend union meetings and see that Communist candidates for office are defeated. We are fighting for our national existence industrially. To give power to men whose first allegiance is other than national is criminal folly. It has been excused in the past by want of thought. After the warning now issued from Transport House that excuse will hold no longer. The patriotic miner, to take one example, must not only hew coal to the utmost, but attend lodge meetings when he would rather be elsewhere/ In some professional unions the need is the same.