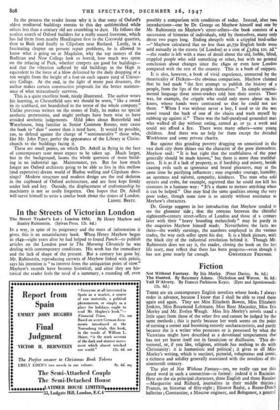 In the Streets of Victorian London

IN a way, in spite of its poignancy and the mass of information it gives, this is an unsatisfactory book. When Henry Mayhew began in 1849—eight years after he had helped to found Punch—to publish articles on the London poor in The Morning Chronicle he was dealing with contemporary conditions. His work has the immediacy and the lack of shape of the present. But a century has gone by. Mr. Rubinstein, reproducing extracts of Mayhew linked with precis, says his intention is "to interest from the antiquarian point of view." Mayhew's records have become historical, and since they are his- torical the reader feels the need of a summary, a rounding off, even possibly a comparison with conditions of today. Instead, after two introductions—one by Dr. George on Mayhew himself and one by Mr. Rubinstein on Mayhew's street-sellers—the book consists of a succession of histories of individuals, told by themselves many only about two pages long. Ending abruptly with a crippled bird-seller —" Mayhew calculated that no less than 41,750 English birds were sold annually in the streets (of London) at a cost of £3,624 MS. 2d." —the reader is left with a mass of detail about the old, feeble, blind, crippled people who sold something or other, but with no general conclusion about changes since the 184os or even how London compared with the rest of the country. This is a book of snippets.

It is also, however, a book of vivid experience, unmarred by the theatricality of Dickens—the obvious comparison. Mayhew claimed that he had made "the first attempt to publish the history of a people, from the lips of the people themselves." In simple unsenti- mental language these street-traders told him their stories. There was, for example, the cripple who could only move about on his knees, whose hands were contracted so that he could not use them. "When I was without never a boy, I used to tie the wet towel round the back of one of the chairs and wash myself by rubbing up against it." There was the half-paralysed groundsel man who walked all day without eating, earned 4s. or 5s. a week and could not afford a fire. There were many others—some young children. And there was no help for them except the dreaded Workhouse and some private charity.

But against this grinding poverty dragging on unnoticed in the vast dark city there shines out the character of the poor themselves. Mayhew said : "It is but right that the truthfulness of the poor generally should be made known," but there is more than truthful- ness. It is as if a lack of property, as if hardship and misery, beside causing evils such as ignorance and brutal pleasures, may at the same time be purifying influences ; may engender courage, humility, an openness and naïveté, sympathy, kindness. The man who sold oysters and crabs, for example, regretted that he could not kill his creatures in a humane way: "It's a shame to torture anything when it can be helped." One may find the same qualities among the very poor today, though none now is so utterly without assistance as Mayhew's characters.

Dr. George suggests in her introduction that Mayhew tended to see the gloomier "side ; that the contrast between the cheerful eighteenth-century street-sellers of London and those of a century later with their "heavy brooding melancholy" may lie partly in the enquiries Mayhew himself made. Nevertheless the facts are there—the weekly earnings, the numbers employed in the various trades, the way each seller spent his day. It is a black picture, with the black city of the industrial revolution behind it. Though Mr. Rubinstein does not say it, the reader, closing the book on the last life story, may reflect that there has been progress—even though it has not gone nearly far enough. GWENDOLEN FREEMAN.