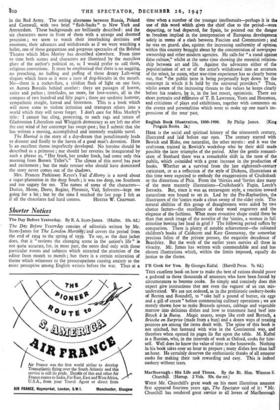 HERE is the social and spiritual history of the nineteenth century, illustrated and laid before our eyes. The century started with Bewick and Blake, one naturalist, the other mystic: and it was the craftsmen trained in Bewick's workshop who by their skill made possible the later triumphs of the period. After the gentle romanti- cism of Stothard there was a remarkable shift in the taste of the public, which coincided with a great increase in the production of books. Whether as a survival from the late eighteenth-century caricature, or as a reflection of the style of Dickens, illustrations at this time were expected to embody the exaggerations of Cruikshank or the distortions of Phiz. From the 'thirties and 'forties date many of the most masterly illustrations--Cruikshank's Fagin, Leech's Jorrocks. But, since it was an extravagant style, a reaction toward naturalism was bound to set in. Led by the Pre-Raphaelites, the illustrators of the 'sixties made a clean sweep of the older style. The natural abilities of this group of draughtsmen were aided by two chance factors—the excellence of their wood engravers and the elegance of the fashions. What more evocative shape could there be than that stock image of the novelist of the 'sixties, a woman in full crinoline bowing her head in grief ? The following period suffers by comparison. There is plenty of notable achievement—the coloured children's books of Caldecott and Kate Greenaway, the somewhat precious folios of the private presses, the exquisite decadence of Beardsley. But the work of the earlier years outvies all these in vivacity. Mr. James has written with commendable zeal and has chosen illustrations which, within the limits imposed, equally do justice to the theme.