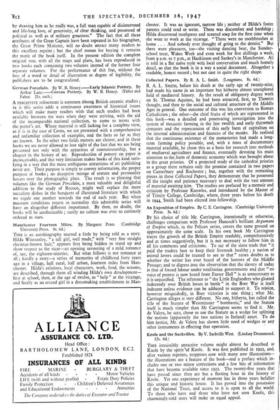 R. A. L. SMITH, before his death at the early age of twenty-nine, had made his name in an important but hitherto almost unexplored field of mediaeval history. As the result of obligatory degree work on St. Thomas Aquinas, he had been attracted, first, to Thomist thought, and then to the social and cultural structure of the Middle Ages in general. One outcome of this was his conversion to Roman Catholicism ; the other—the chief fruits of which are represented in this book—was a detailed and penetrating investigation into the system of monastic farming in the late twelfth and early thirteenth centuries and the repercussion of this early form of capitalism on the internal administration and finances of the monks. He realised that the continuous existence of the monasteries had made a long- term farming policy possible, and, with a mass of documentary material available, he chose this as a basis for research into methods of mediaeval agriculture and finance, eventually devoting his main attention to the.form of domestic economy which was brought about in the great priories. Of a projected study of the cathedral priories as a group there remains only the promise contained in two papers on Canterbury and Rochester ; but, together with the remaining pieces in these Collected Papers, they demonstrate that he possessed all the insight and patience necessary to deal with the vast amount of material awaiting,him. The studies are prefaced by a memoir and criticism by Professor Knowles, and introduced by the Master of of Trinity College, Cambridge, where,. three years before his death in 1944, Smith had been elected into fellowship.