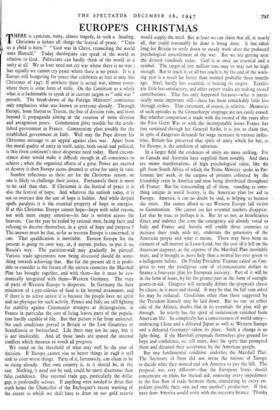 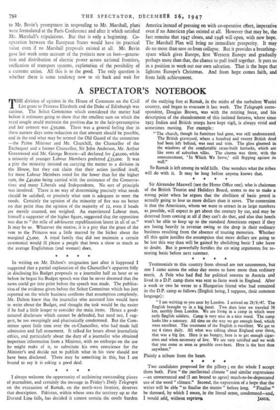 THERE is cynicism, irony, almost tragedy, in such a heading. Christmas is before all things the festival of peace. "Unto us a child is born." "God was in Christ, reconciling the world unto Himself." Today theologians can speak of the world in relation to God. Politicians can hardly think of the world as a unity at alL We at least need not cry war where there is no war ; but equally we cannot cry peace where there is no peace. It is a Europe still hungering for peace that celebrates as best it may this Christmas of 1947. If nowhere there is actual war, almost every- where there is some form of strife. On the Continent as a whole what it is fashionable to speak of in current jargon as "cold war" prevails. The break-down of the Foreign Ministers' conference only emphasises what was known to everyone already. Through Europe, from Stettin to Trieste, the line of division runs, and from beyond it propaganda aiming at the creation of more division and antagonism pours. Communism plots trouble for the estab- lished government in France. Communism plots trouble for the established government in Italy. Well may the Pope devote his Christmas message to an appeal against class war. Apart from the moral quality of unity in itself, unity, both social and political, is this riven continent's most desperate need today. Hard circum- stance alone would make it difficult enough in all conscience to achieve ; when the organised efforts of a great Power are exerted to destroy it then Europe seems doomed to strive for unity in vain.

Sombre reflections as these are for the Christmas season, no one is likely to challenge their justice. Fortunately there is more to be said than that. If Christmas is the festival of peace it is also the festival of hope. And whatever the outlook today, it is not so overcast that the star of hope is hidden. And while despair spells paralysis it is the essential property of hope to energise. If at this Christmas Europe cannot hope—hope with solid reason, not with mere empty emotion—its fate is written across the heavens. Can the year be ended by rational men, facing facts and refusing to deceive themselves, in a spirit of hope and purpose ? The answer must be that, so far as western Europe is concerned, it can. That qualification is inevitable. Eastern Europe for the present is going its own way, or, if anyone prefers to put it so, Russia's way. The partition-wall may gradually be pierced. Various trade agreements now being discussed should do some- thing towards achieving that. But for the present all it is profit- able to consider is the future of the sixteen countries the Marshall Plan has brought together, and with them—for it must be eco- nomically integrated with them—Western Germany. The state of parts of Western Europe is desperate. In Germany the bare minimum of 1,550 calories of food is far beyond attainment, and if there is no active unrest it is because the people have no spirit and no physique for such activity. France and Italy are still fighting for stability against Communist attempts at disintegration, in France in particular the cost of living leaves parts of the popula- tion hardly capable of life. But that picture is far from universal. No such conditions prevail in Britain or the Low Countries or Scandinavia or Switzerland. Life there may not be easy, but it is not intolerable. And all those lands are spared the internal conflicts which threaten to wreck all progress.

We stand on the threshold of what may well be the year of decision. If Europe cannot rise to better things in 1948 it will sink to even worse things. Parts of it, fortunately, can claim to be so rising already. Our own country is, as it should be, in the van. Nothing, it need not be said, could be more disastrous than false confidence. Our external trade gap, particularly the dollar gap, is profoundly serious. If anything were needed to drive that truth home the Chancellor of the Exchequer's recent warning of the extent to which we shall have to draw on our gold reserve would supply the need. But at least we can claim that all, or nearly1 all, that could reasonably be done is being done. It has taken' long for Britain to settle down to steady work after the profound psychological unsettlement of the war. But we are getting near the desired standards today. Coal is at once an essential and a symbol. The target of 200 million tons may or may not be high enough. But to reach it, or all but reach it, by the end of the work- ing year is a result far better than seemed probable three months ago. Steel, hardly less essential, is beating its targets. Textiles are little less satisfactory, and other export trades are making record contributions. That has only happened because—what is intrin- sically more important still—there has been remarkably little loss through strikes. That statement, of course, is relative. Memories of such episodes as the Grimethorpe stoppage are not easily erased.

But whether comparison is made with the record of the years after the First Great War or with the incomputable losses France has just sustained through her General Strike, it is just to claim that, in spite of dangerous demands for wage increases in various indus- tries, Britain has preserved that spirit of unity which for her, as for Europe, is the condition of salvation.

In a larger field the evidences of unity are more striking. For us Canada and Australia have supplied them notably. And there are minor manifestations, of high psychological value, like the gift from South Africa of which the Prime Minister spoke in Par- liament last week, or the cargoes of presents collected by the friendship train in America and now being distributed throughout all France. But far transcending all of them, standing as some- thing unique in world history, is the American plan for aid to Europe. America, it can no doubt be said, is helping us because she must. She cannot afford to see Western Europe fall victim to Communism. She cannot see her essential markets disappear.

Let that be true, as perhaps it is. But let us not, as beneficiaries direct and indirect (for even the emergency aid already voted to Italy and France and Austria will enable those countries to increase their trade with 'us), underrate the generosity of the American people and what it means. There may have been an element of self-interest in Lease-Lend, but the cost of it fell on the American taxpayer, as the expense of the Marshall Plan inevitably must, and it brought us more help than a neutral has ever given to a belligerent before. On Friday President Truman called on Con- gress to vote the prodigious sum of 17,00n,000,000 dollars to finance a four-year plan for European recovery. Part of it will be in the form of loans, by far the greater part in the form of outright grants-in-aid. Congress will naturally debate the proposals clause by clause, as it must and should. It may be that the full sum asked for may be reduced. Conditions other than those suggested by the President himself may be laid down. But no one on either side of the Atlantic doubts that in its essentials the plan will go through. So utterly has the spirit of isolationism vanished from American life. So completely has a consciousness of world-unity- embracing China and a defeated Japan as well as Western Europe and a defeated Germany—taken its place. Such a change is no light thing. If the Marshall proposals themselves give ground for hope and confidence, so, still more, does the spirit that prompted them and dictated their acceptance by the American people.

But one fundamental condition underlies the Marshall Plan. The Secretary of State did not invite the nations of Europe to decide what they wanted and ask America to pay the bill. The proposal was very different—that the European States should concentrate on plans for mutual aid, removing every impediment to the free flow of trade between them, stimulating by every ex- pedient possible their own and one another's production. If that were done America would assist with the necesary finance. Thanks

to Mr. Bevin's promptness in responding to Mr. Marshall, plans were formulated at the Paris Conference and after it which satisfied Mr. Marshall's stipulations. But that is only a beginning. Co- operation between the European States would have its practical value even if no Marshall proposals existed at all. Mr. Bevin gave last week some account of the projects now on foot—genera- tion and distribution of electric power across national frontiers, unification of transport systems, explanation of the possibility of a customs union. All this is to the good. The only question is whether there is some tendency now to sit back and wait for

America instead of pressing on with co-operative effort, imperative even if no American plan existed at all. However that may be, the fact remains that 1947 closes, and 1948 will open, with new hope. The Marshall Plan will bring no immediate prosperity. It may do no more than save us from collapse. But it provides a breathing- space which gives Europe, first Western Europe and gradually perhaps more than that, the chance to pull itself together. It puts us in a position to work out our own salvation. That is the hope that lightens Europe's Christmas. And from hope comes faith, and from faith achievement.