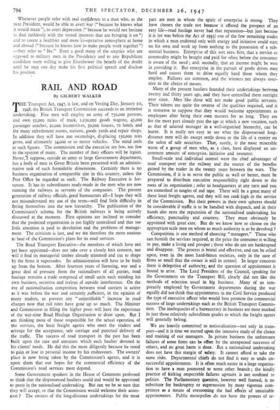 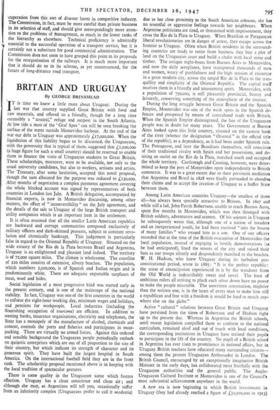 THE Transport Act, 1947, is law, and on Vesting Day, January 1st 1948, the British Transport Commission succeeds to an immense

undertaking. Five men will employ an army of 750,000 persons and own 52,000 miles of track, 1,230,000 goods wagons, 45,000 passenger coaches, 20,000 locomotives, 50,000 houses, 70 hotels and the many refreshment rooms, stations, goods yards and repair shops In addition they will have too steamships, displacing 15o,000 tons gross, and ultimately 34,000 or so motor vehicles. The mind reels at such figures. The commission and the executive are few, too few in the opinion of many. The number of their officers will be legion. Never,1 suppose, outside an army or large Government department, has a body of men in Great Britain been presented with an adminis- trative task of such formidable dimensions. Certainly there is no business organisation of comparable size in this country, unless the Post Office be regarded as such. The Railway Executive is for- tunate. It has its subordinates ready-made in the men who are now running the railways as servants of the companies. The present generation of railway officials, good bureaucrats all—I hope they will not misunderstand my use of the term—will find little difficulty in fitting themselves into the new hierarchy. The publication of the

Commission's scheme for the British railways is being actively discussed at the moment. First opinions are inclined to consider that the projected organisation is too highly centralised and that too little attention is paid to devolution and the problems of manage- ment. The criticism is just, and we ire -therefore the more anxious to hear of the Commission's plans for its road services.

The Road Transport Executive—the members of which have not yet been appointed—does not take over a closely knit concern, nor will it find its managerial timber already trimmed and cut to shape by the firms it supersedes. Its administration will have to be built up from the bottom. After fourteen years of licensing, war and a great deal of pressure from the rationalisers of all parties, road haulage remains a trade composed of small units each minding his own business, secretive and jealous of outside interference. On the eve of nationalisation competition between road carriers is active as it was before the war and certainly sufficient, in the opinion of many traders, to prevent any " unjustifiable " increase in road charges now that rail rates have gone up so much. The Minister and Commission in filling the higher posts will have the experience of the war-time Road Haulage Organisation to draw upon. But I am thinking more of those responsible for the actual operation of the services, the local freight agents who meet the traders and arrange for the acceptance, safe carriage and punctual delivery of the traffic. The success of road transport in the past has been built upon the care and attention which each haulier devoted to his clients' needs. He did this the more diligently because he stood to gain or lose in personal income by his endeavours. The owners' place is now being taken by the Commission's agents, and it is upon them that our hopes for the commercial efficiency of the Commission's road services most depend.

Some Government speakers in the House of Commons professed to think that the dispossessed hauliers could and would be appointed to posts in the nationalised undertaking. But can we be so sure that they will accept, or that the Commission would welcome their acces- sion? The owners of the long-distance undertakings for the most part are men in whom the spirit of enterprise is strong. They have chosen the trade not because it offered the prospect of an easy life—road haulage never had that reputation—but just because it is (or was before the Act of 1933) one of the few remaining trades in which a man endowed only with energy and initiative could start on his own and work up from nothing to the possession of a sub- stantial business. Enterprise of this sort sees, first, that a service or commodity might be bought and paid for often before the consumer is aware of the need ; and, secondly, that an income might be won in providing it. But enterprise in the pursuit of profit drives men hard and causes them to drive equally hard those whom they employ. Failures are common, and the winners not always over- nice in the choice of means.

Many of the present hauliers founded their undertakings between twenty and thirty years ago, and they have controlled them outright

ever since. Men like these will not make good public servants. 3 Their talents are quite the reverse of the qualities required, and it is nonsense to suppose that they would welcome appointments as employees after being their own masters for so long. They are for the most part already past the age at which a new vocation, such as that of salaried manager in a well-organised hierarchy, can be learnt. It is really not easy to see what the dispossessed long- distance men will do except settle down to the life of a rentier on the safest of safe securities. That, surely, is the most miserable waste of a group of men who, as a class, have displayed an un- common amount of enterprise, initiative and resource.

Small-scale and individual control were the chief advantages of road transport over the railway and the source of the benefits gained by the trader in the twenty years between the wars. The Commission, if it is to serve the public as well or better, must be prepared to distribute executive responsibility right down to the roots of its organisation ; refer to headquarters at any turn and you are enmeshed in tangles of red tape. There will be a great many of these local freight agents, and they will not rank high in the service of the Commission. But their powers in their own spheres should be considerable if traffic is to be handled with dispatch, and in their hands also rests the reputation of the nationalised undertaking for efficiency, punctuality and courtesy. They must obviously be appointed with great care. But do we know how to choose on the appropriate scale men on whom so much authority is to be devolved ?

Competition is one method of choosing "managers." Those who can furnish the services required, at the price the consumer is willing to pay, make a living and prosper ; those who do not are bankrupted and disappear. The process is brutal and effective, and can be relied upon, even in the most hard-bitten societies, only in the case of firms so small that the owner is still in control. In larger concerns there is delegation of authority, and the question of appointment is bound to arise. The Lord President of the Council, speaking for the Government on the Transport Bill, clearly did not like the methods of selection usual in big business. Many of us tem- porarily employed by Government departments during the war equally did not think that appointments in the Civil Service produced the type of executive officer who would best promote the commercial success of large undertakings such as the British Transport Commis- sion. The inadequacies of a bureaucracy in business are most marked in just those relatively subordinate grades to which the freight agents will generally belong.

We are heavily committed to nationalisation—not only in trans- port—and it is time we started upon the intensive study of the choice and training of our managers. In private business the unforeseen failures of some firms can be offset by the unexpected successes of others, and no great harm is done. But a nationalised undertaking does not have this -margin of safety. It cannot afford to take the same risks. Departmental chiefs do not find it easy to undo un- successful appointments. It is often much easier in a large organisa- tion to have a man promoted to some other branch ; the kindly practice of kicking respectable failures upstairs is not confined to politics. The Parliamentary question, however well framed, is no substitute for bankruptcy or supersession by more vigorous com- petitors as a means of overcoming the bad effects of unsuitable appointments. Public monopolies do not have the powers of re-

'cuperation from this sort of disaster latent in competitive industry. The Commission, in fact, must be more careful than private business in its selection of staff, and should give correspondingly more atten- tion to the problems of Management, as much in the lower ranks of the hierarchy as elsewhere. Technical proficiency is admittedly essential to the successful operation of a transport service, but it is certainly not a substitute for good commercial administration. The Commission does not seem to have grasped this point in its proposals for the reorganisation of the railways. It is much more important that it should do so in its scheme, as yet unannounced, for the future of long-distance road transport.