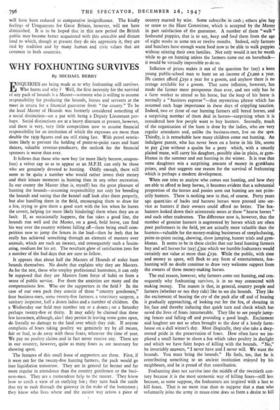 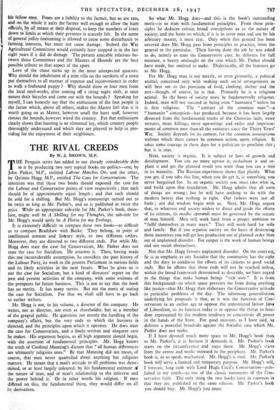 By MICHAEL BERRY ENQUIRIES are being made as to why foxhunting still survives. Who hunts and why ? Well, the first necessity for the survival of any pack of hounds is a Master—someone who is willing to assume responsibility for producing the hounds, horses and servants at the meet in return for a financial guarantee from "the county." To be the local Master of Hounds was formerly considered something of a social distinction—on a par with being a Deputy Lieutenant per- haps. Social distinctions are at a heavy discount at present, however, and there is very, very little competition now to assume financial responsibility for an institution of which the expenses are more than double the 1939 figures and are still rising fast. With petrol restric- tions likely to prevent the holding of point-to-point races and hunt dances, valuable revenue-producers, the outlook for the financial sponsors is worse than ever.

It follows that those who now buy (or more likely borrow, coupon- free) a velvet cap so as to appear as an M.F.H. can only be those who are genuinely devoted to hunting. Oddly enough, there still seam to be quite a number who would rather invest their money and their leisure moments in hunting than in any other recreation. In our county the Master (that is, myself) has the great pleasure of hunting the hounds—assuming responsibility not only for breeding the hounds and seeing that the kennel staff look after them properly, but also handling them in the field, encouraging them to draw for a fox, trying to give them a good start with the fox when he leaves the covert, helping (or more likely hindering) them when they are at fault. If, as occasionally happens, the fox takes a good line, the hounds run well and the Master, on a good, bold horse, can find his way over the country without falling off—there being small com- petition now to jump the fences in the lead—then he feels that he really has achieved something through an element of mastery over animals, which are such an inexact, and consequently such a fascin- ating, medium for his art. The resultant glow of satisfaction lasts for a number of the bad days that are sure to follow.

It appears that about half the Masters of Hounds of today hunt hounds themselves. No doubt that explains why they are Masters. As for the rest, those who employ professional huntsmen, it can only be supposed that they are Masters from force of habit or from a sense of public service. For them the anxieties are many and the compensations few. Who are the supporters in the field ? In the case of our own pack they consist of three "country gentlemen," four business-men, some twenty-five farmers, a veterinary surgeon a sanitary inspector, half a dozen ladies and a number of children. On a Wednesday our field may number ten or a dozen ; on a Saturday perhaps twenty-five or thirty. It may safely be claimed that these few horsemen, although, alas ! they persist in leaving some gates open, do literally no damage to the land over which they ride. If anyone complains of foxes taking poultry we genuinely try by all means, fair or foul, to do away with those foxes, whatever the time of year. We pay no poultry claims and in fact never receive any. There are in our country, however, quite as many foxes as are necessary for showing sport.

The features of this small force of supporters are three. First, if it were not for the twenty-five hunting farmers, the pack would go into liquidation tomorrow. They are in general far keener and far more regular in attendance than the country gentlemen or the busi- ness-men. They are a tremendous help to the master. They know how to catch a view of an outlying fox ; they turn back the cattle that try to rush through the gateway in the wake of the huntsmen ; they know who lives where and the easiest way across a piece of country marred by wire. Some subscribe in cash ; others give hay or straw to the Hunt Committee, which is accepted by the Master in part satisfaction of the guarantee. A number of them " walk " foxhound puppies, that is to say, keep and feed them from the age of eight weeks to some ten or twelve months. Indeed, only farmers and butchers have enough waste food now to be able to walk puppies without stinting their own families. Not only would it not be worth while to go on hunting unless the farmers came out on horseback— it would be virtually impossible to do so.

Inflation of prices makes it out of the question for (say) a keen young public-school man to hunt on an income of £r,000 a year. He cannot afford L250 a year for a groom, and anyhow there is no cottage available for a groom. That same inflation, however, has made the farmer more prosperous than ever, and not only has he a farm worker to attend to his horse, but the keep of his horse is normally a "business expense "—that mysterious phrase which has assumed such huge importance in these days of crippling taxation. Indeed, two or three of our hunting farmers still breed horses, and a surprising number of them deal in horses—surprising when it is considered how few people want to buy hunters. Secondly, much of the organisation of the hunt is done by the ladies, who are very regular attendants and,, unlike the business-men, live on the spot. Thirdly, it is remarkable how many children come out hunting. -An indulgent parent, who has never been on a horse in his life, seems to pay £m° without a qualm for a pony which, with a smartly plaited mane, will carry his daughter, possibly also in plaits, at gym- khanas in the summer and out hunting in the winter. It is true that some daughters win a surprising amount of money in gymkhana prizes, and that suggests one reason for the survival of foxhunting which is perhaps a modern development.

When one tries to analyse who comes out hunting, and how they are able to afford to keep horses, it becomes evident that a substantial proportion of the horses and ponies seen out hunting are not prim- arily hunters. There is nothing new in that, of course. Forty years ago quantities of hacks and harness- horses were pressed into ser- vice as hunters if their owners could afford no better. The fox- hunters looked down their aristocratic noses at these "hearse horses" and such other tradesmen. The difference now is, however, that the number of genuine hunters is augmented by horses which are often poor performers in the field, yet are actually more valuable than the hunters—valuable for the money-making businesses of steeplechasing, point-to-point racing, showing, show jumping, hunter trials and gym- khanas. It seems to be in these circles that our local hunting farmers buy and sell horses for (say) k300 which we humble foxhunters would certainly not value at more than D50. While the public, with time and money to spare, will flock to any form of entertainment, fox- hunting will no doubt continue to draw very welcome support from the owners of these money-making horses.

The real reason, however, why farmers come out hunting, and con- sequently why foxhunting survives, is in no way connected with making mone,y. The reason is that, in general, country people and farmers (whether or not they ride) like to see the hounds. They like the excitement of hearing the cry of the pack afar off and of hearing it gradually approaching, of looking out for the fox, of shouting in his face and thereby inducing that quick turn and check which has saved the lives of foxes innumerable. They like to see people jump- ing fences and falling off and providing a good laugh. Excitement and laughter are not so often brought to the door of a lonely farm- house on a dull winter's day. Most illogically, they also take a deep- rooted pride in the preservation of foxes. How often have we im- plored a small farmer to shoot a fox which takes poultry in daylight and which we have faint hopes of killing with the hounds. "No," he invariably answers, "I never have and I never will. We want the hounds. You must bring the hounds." He feels, too, that he is contributing something to an ancient institution enjoyed by his neighbours, and he is proud of that contribution.

Foichunting does not survive into the middle of the twentieth cen- tury because it is the most economic way of killing foxes—still less because, as some suppose, the foxhunters are inspired with a lust to kill foxes. That is no more true than to suppose that a man who voluntarily joins the army in neace-time does so from a desire to kill his fellow men. Foxes are a liability to the farmer, but so are rats, and on the whole it suits the farmer well enough to allow the hunt officials, by all means at their disposal, to keep the numbers of foxes down to limits at which their presence is scarcely felt. In the name of general jollity foxhunting is allowed to cause some disturbance to farming interests, but must not cause damage. Indeed the War Agricultural Committees would certainly have stopped it in the last eight years if it did do damage. The present amicable relations be- tween those Committees and the Masters of Hounds are the best possible tribute to that aspect of the sport.

Love of the chase turns up in the most unexpected quarters. Why should the inhabitants of a trim villa on the outskirts of a town put themselves to all manner of expense and inconvenience in order to walk a foxhound puppy ? Why should three or four men from the local steel-works, after coming off a tiring night shift, at once mount their bicycles and come out with the hounds ? Speaking for myself, I can honestly say that the enthusiasm of the foot people is the factor which, above all others, makes the Master feel that it is worth going on as Master, however small the hunt staff, however riotous the hounds, however wired the country. For that enthusiasm clearly shows that hunting is an elemental joy, which country people thoroughly understand and which they are pleased to help in pro- viding for the enjoyment of their neighbours.