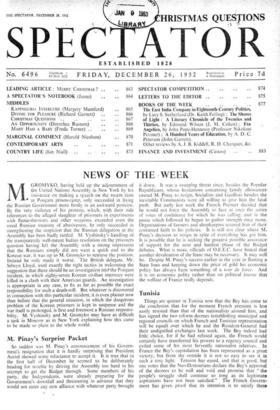 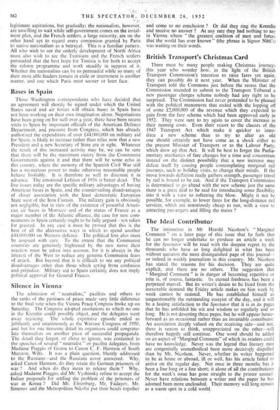 Things are quieter in Tunisia now that the Bey has come to the conclusion that for the moment French pressure is less easily resisted than that of the nationalists around him, and has signed the two reform decrees (establishing municipal and regional councils on which French and Tunisian representation will be equal) over which he and the Resident-General had their undignified exchanges last week. The Bey indeed had little choice, for if he had refused again, the French would certainly have transferred his powers to a regency council and exiled some of his most fervently nationalist relatives. In France the Bey's capitulation has been represented as a great victory, but from the outside it is not so easy to see it in such a rosy light. Tension has eased, and that is good, but one notes that the Neo-Destourians declare the Bey's approval of the decrees to be null and void and promise that " the people's struggle shall continue so long as its legitimate aspirations have not been satisfied." The French Govern- ment has given proof that its intention is to satisfy these legitimate aspirations, but gradually; the nationalists, however, - are unwilling to wait while self-government comes on the instal- ment plan, and the French settlers, a large minority, are on the other hand apt to regard every concession granted by Paris to native nationalism as a betrayal. This is a familiar pattern. All who wish to see the orderly development of North Africa must also wish to see the Tunisians and the French settlers persuaded that the best hope for Tunisia is for both to accept the reform programme and work steadily in support of it. Whether the nationalists can be so persuaded while so many of their most able leaders remain in exile or internment is another matter, and one which Paris must sooner or later face.