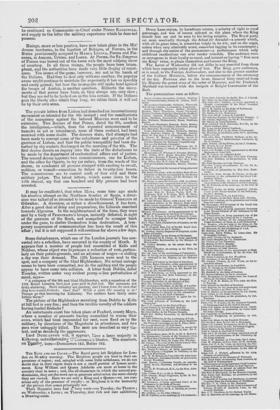 Page 10, 26 February 1831 — Some disturbances, which one of the London journals has con-
Close

Some disturbances, which one of the London journals has con-

verted into a rebellion, have occurred in the county of Meath. It appears that a number of people had assembled at Kells and Nobbor, whose object was to procure a reduction of rent, particu- larly on their potato-grounds, and an advance of wages—a shilling a day was their demand. The 12th Lancers were sent to the spot, and a company of the 92nd Highlanders. No actual outrage seems to have been committed, nor do the military and the people appear to have come into collision. A letter from Dublin, dated Tuesday, written under very evident penny-a-line perturbation of mind, says- " A company of the 9th and 92nd Highlanders, with a squadron of the 12th Royal Lancers, hare just gone past in full trot. The accounts are truly alarming. More infantry are passing, and I learn from the men that they hare loaded firelorks. Good God ! What a state the country is in ! Troops go this morning for Kilkenny. The soldiers have thirty miles before them."

The picture of the Highlanders marching from Dublin to Kells at full trot is very fine ; and then the terrible novelty of the soldiers baying loaded firelocks I An unfortunate event has taken place at Foxford, county Mayo, where a number of peasants having assembled to rescue their cows, which had been impounded for rent, were fired on by the military, by directions of the Magistrate in attendance, and two men were unhappily killed. The mob are described as very vie- lent, and as decidedly the aggressors. Lord DUNCANNON Will, it appears; have a large majority in Kilkenny, notwithstanding C't■ONNELL'8 bluster. -The numbers, on Tscsday, -*ere—Duncannon 163, Butler 102.