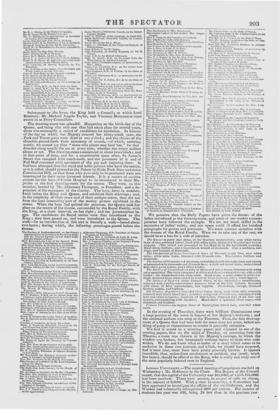 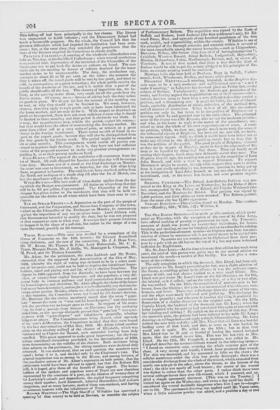 LONDON UsuvEnsiTy.—The annual meeting of proprietors was held on Wednesday

; Mr. Hobliouse in the Chair. The Report of the Council stated, that the capital of the University was 164,0004, of which 155,0004 had been received. There were arrears, in respect of -calls on shares, to the amount of 6,0004 With a view to economy, a Committee had been appointed to investigate the affairs of the establishment, and the 'Warden had voluntarily relinquished 2001. per annum. The number of students last year was 516, being 70 less than in the previous year that Government intended to modify the duty, but he was not prepared THE Oen BAILEY SesstoNs.—The trials at this sessions, which termi at that moment to state in what way. It was not their present intention nated on Thursday, with the exception of the case of St. John Long, to impose it in the shape of a poll-tax, but rather in the shape of a tax have offered nothing of passing or permanent interest. On Thursday,