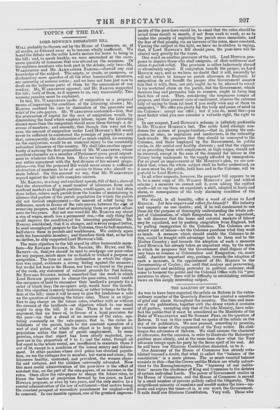 WILL probably be thrown out by the House of Commons,

or, at all events, so frittered away as to become wholly inefficient. We heard the debate on the noble Lord's motion for leave to bring in the bill ; and, to speak frankly, we were astonished at the enor- mous quantity of nonsense that was uttered on the occasion. Of the eighteen members who took part in the debate, only two—Mr. WARBURTON and Mr. ALEXANDER BARING—showed any real knowledge of the subject. The empty, or crude, or pompous, or declamatory mere speeches of all the other honourable members, are unworthy of serious notice ; and we have not time just now to dwell on the ludicrous parts of them for the amusement of our readers. Mr% WARBURTON opposed, and Mr. BARING supported the bill ; both of them, as it appears to us, very successfully. This seeming paradox must be explained. In fact, Mr. WARBURTON spoke of emigration as a proposed means of improving the condition of the labouring classes ; Mr. BARING confined his view to diminution of the poor-rate and relief of the rate-payers. Mr. WARBURTON contended—first, that the abstraction of capital for the cost of emigration would, by diminishing the fund which employs labour, injure the labouring classes more than the emigration would serve them through a de- crease of numbers • and secondly, that though this were not the case, the amount of emigration under Lord Howlett's Bill would never be sufficient to counteract the principle of population ; and that, consequently, the abstraction of so much capital, for carrying on the emigration, would be an unmixed injury to the constantly redundant labourers of this country. We shall take another oppor- tunity of noticing the first proposition of Mr. WARBURTON, whose excellent character as a member of Parliament gives great import- ance to whatever falls from him. Here we have only to express our entire agreement with the first division of his second propo- sition,—viz. that the proposed Bill would never cause a sufficient abstraction of numbers to be of service to those who should re- main behind. On this account we say, that Mr. WARBURTON argued against the bill with complete success.

Mr. BARING, in a long and excellent speech, full of facts, showed that the abstraction of a small number of labourers from such confined markets as English parishes, would again, as it had often done before, relieve each parish from the burden of maintaining in idleness that portion of the parish population for which the parish did not furnish employment ;—the amount of relief being the difference, much in favour of the rate-payers, between the coat of removing paupers, and that of maintainint, them on parish allow- ance for two years. But not one word difMr. BARING say about a rise of wages, much less a permanent rise,—the only thing that could improve the condition/ of the labouring population. Mr. BARING established, that it is cheaper, and in every respect better, to send unemployed paupers to the Colonies, than to half-maintain, half-starve them in pounds and workhouses. We entirely o- with the honourable member ; and therefore think that, so far but no farther, he ably supported Lord HOWICK'S bill.

The main objection to the bill urged by other honourable mem- bers—Sir EDWARD SUGDEN, Mr. SADLER, Mr. HUNT, and Mr. BENETT—is, thatiwe should be mad to mortgage our poor-rates for any purpose, much more for so foolish or wicked a purpose as emigration. The tone of mere declamation in which the objec- tion was urged, evidences a strong feeling against the measure ; but we did not hear in the House, nor have we found in the press of the week, any statement of rational grounds for that feeling. Sir EDWARD SUGDEN, indeed, remarked that the mode in which Lord Howlett proposes to charge the poor-rates, would enable the occupiers of land to encumber their landlord's property for a relief of which they, the occupiers only, would have the benefit. But this objection is merely technical, or rather belongs to the de- tails of the bill; since it will be easy to give the landowner a veto on the question of charging the future rates. There is an objec- tion to any charge on the future rates, whether with or without the consent of the landlords—an objection which to our mind ought to stop the bill, it is this. There is but one sound argument, that we know of, in favour of a legal provision for the poor—viz, that a dread of an increase of the rates, ope- rating constantly on the rate-payers, that is, the richer in- habitants of the parish, leads to the constant operation of a sort of civil police, of which the object is to keep the parish population within the limit of parish employment. In some parishes, where that object has been utterly neglected, pau- pers are in the proportion of 9 to 1 • and the rates, though all but equal to the whole rental, are insufficient to maintain those 9 out of 10, except in a condition of the lowest misery and debase- ment. In other parishes where civil police has checked popula- tion, we see the cottages few in number, but warm and clean; the labourers healthy, contented, and provident, the women cheer- ful and virtuous and the children universally educated. Now this most useful virtuous, of the poor-laws is the effect of constant fear, on the part of the rate-payers, of an increase in the rates. Once allow the rate-payers to charge the future rates, to throw the burden of pauperism forward by ten years, as Lord Howlett proposes, or even by two years, and the only motive to a careful administration of the law of settlement—that motive being the constant prospect of immediate punishment for neglect—will be removed. In our humble opinion, one of the greatest improve- -ments of the poor-laws would be, to enact that the rates should he levied from month to month, if not from week to week, so as to render the penalty of neglecting the parish more immediate, and the fear of that penalty, viz, an increase of the rates, more constant. Viewing the subject in this light, we have no hesitation in saying, that, if Lord Howlett's Bill should pass, the poor-laws will be altered very greatly for the worse. One word on another provision of the bill. Lord Howlett pro- poses to deprive those who shall emigrate, of their settlement and claim to parish relilf. The provision is either ludicrously absurd or abominably unjust. If emigration benefit the pauper, as Lord HOWICK says, and as we have no doubt that it will, assuredly he will not return to hunger on parish allowance in England. If emigration do not benefit the pauper (the Government assures him that it will), then, not only ought he to be , allowed to revert to his wretched claim on the parish, but the Government, which deceives him and persuades him to remove, ought to bring him back free of cost. Then, considering the suspicious temper of paupers, and their present state of excitement, observe the extreme folly of saying to them (at least if you really wish any of them to emigrate), "We offer you plenty for the body and peace of mind in the Colonies : accept our offer ; but if you do, mind this—you must forfeit what you now consider a valuable right, the right to live."

In one respect, Lord HOWICK'S scheme is infinitely preferable to Mr. WILMOT HORTON'S last. The noble Lord strongly con- demns the system of pauper-location,--that is, placing the emi- grants, at once, as capitalists and landowners, in the unhealthy back-woods. He proposes that they should be conveyed to the Colonies, and there employed by the Government, on public works, in the settled and healthy districts ; and that the expense of so providing them with employment, at high wages, should not be incurred, except in the case of the demand for labour in the Colony being inadequate to the supplY afforded by immigration. For so great an improvement of Mr. HORTON'S plan, we are con- fident that, when the whole subject shall be better understood, as it soon must be, the public, both here and in the Colonies, will be grateful to Lord Howlett.

In all other respects, however, the proposed bill appears to us to be a mere copy of Mr. WILMOT HORTON'S last and wildest scheme ; a measure we cannot call it, even adding the epithet crude—let us say then, an expedient, a shift, adopted in hurry and alarm, in consequence of the truly alarming condition of the peasantry. We would, in all humility, offer a word of advice to Lord Howlett. Let him inquire and reflect for himself I His industry and capacity no one doubts ; and, if he will condescend to use these for the purpose of thoroughly understanding the whole sub- ject of Colonization, of which Emigration is but one ingredient, he will discover that the home and colonial markets of labour may be equalized, not by pushing emigration from England, but by pulling immigration to the Colonies. The Colonies are in urgent want of labour—let the Colonies purchase what they want so much. A measure which should enable the Colonies to do this, would be fraught with advantage both to them and to the Mother Country; and towards the adoption of such a measure Lord Howlett has already taken an important step, by the mode in which he proposes that the Government shall dispose of the verr basis or essence of Colonization and Emigration, viz, waste land. Another important step, perhaps, towards the adoption of such a measure, is the appointment of Mr. HORTON to the Governorship of Ceylon ; for, until that zealous and persevering, but ignorant and meddling pretender in political economy, shall cease to torment the public and the Colonial Office with his "pre- parations to show," there will be difficulty in establishing rational views on this deeply interesting subject.