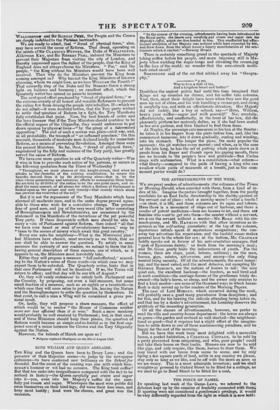 THE ADVERTISEMENTS OF THE WEEK.

WE are great readers of advertisements :the columns of the Times or Morning Herald, when crowded with them, form a kind of in- dex of life. Imagine the parties brought together, from the portly candidate for an East India directorship to the shabby-genteel of the servant out of place : what a moving scene !—what a bustle ! —in short, it is life, and these columns are its signs and tokens.

Here there is a movement of ships out of harbour, and there a vender of patent medicines—here are houses to let, and there are families who want to get into them—the master without a servant, vis-a-vis the servant without a master—Mr. READ with his sto- mach-pump, and Mr. HAWKINS with that other invention as in- genious as the self-acting pianoforte : at the top of the column, mysterious initials speak of mysterious assignations ; the run- away boy advertises his repentance, and the bashful wooer makes general love to the whole fair sex: at the bottom, Mr. CHaamax boldly speaks out in favour of his anti-eructative sausages, that "gem of Epicurean dainty," so fresh from the morning's mail ; and Dr. Goss gently hints the indiscretions of youth. For the women, there are stays, paint, lotions, millinery ; for the men, horses, gigs, estates, advowsons, and money—the only thing wanted being security. Of all the advertisements, the most tempt- ing, and the most varied, and the most delusive, not excepting Mr. GEORGE ROBINS'S, are the notices of horses to sell : the nice quiet cob, the excellent hackney—the hunters, so well bred and in such condition—the carriage-horses of the gentleman lately de- ceased—the lady's horse, so cheap, and the owner only anxious to find a kind master—are some of the thousand ways in which horse- flesh is daily served up to the readers of the Morning Papers. The case of Lord MORLEY, which occurred during the week, will probably save a good many greenhorns from deception ; and for this, and for his braving the ridicule attending being taken in, and that too by a dealer's advertisement, his Lordship deserves the gratitude of the mounting generation. Of all the classes of advertisements, however, we prefer to read the villa and country-house department : the lawns are always so green—the garden and orchard so well stocked—the neighbour- hood so good—that it requires but a slight effort of the imagina- tion to settle down in one of these auctioneering paradises, and be happy for the rest of the morning. But we have this week been most delighted with a moveable house, a pocket habitation, a COLONIAL COTTAGE, to be sold by a party prevented from emigrating, and who, poor people ! could not take their house on their backs. Houses are now to be sold like gigs, and only require, like them, horses to draw them. We may travel with our house from scene to scene, and by only hiring a few square yards of land, settle in any country we please, stay only as long as we like, and be off with the dawn as soon as we are weary. This is a most admirable invention; arid we shall straightway proceed to Oxford Street to be fitted for a cottage, as we used to go to Bond Street to be fitted for a coat.