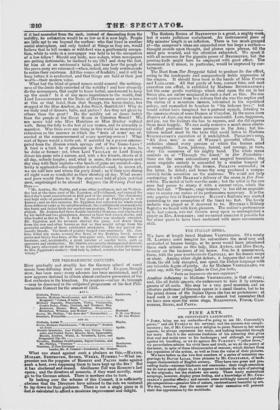 "JOHN, bring me my umbrella—I'm going to see Mr. Cawnstable's pictur," said old FUSEL' to his servant; and the sarcasm was compli- mentary; for, if Mr. CONSTABLE delights to paint Nature in her moist aspects, he always represents her truly, and looking beautiful through her tears. But it is the extreme freshness of his colouring that gives that cool and moist tone to his landscapes ; and although we protest against his handling, as we do against Mr. TURNER'S "yellow fever," we nevertheless admire his vivid force and truth, as we do the poetry of the latter, in spite of these idiosyncracies of manner, which detract from the reputation of the artists, as well as from the value of their pictures. We have before us the two first numbers of a series of mezzotint en. gravhigs by DAVID LUCAS, from pictures by Mr. CONSTABLE, aka. scapes characteristic of English scenery. Theyhave two great and pre. vailing faults—extreme blackness and coarseness: their rough execution we do not so much object to as it appears to imitate the style of painting in the originals; but the shadows are sooty. These hasty mezzotint° scrapings, however, display great feeling, and a knowledge of Mr. CON.. STABLE'S peculiar effects; and contain some strikingly natural and aim. ple compositions—genuine bits of nature, renderedmore beautiful by art. We fear, however, that the manner of their execution will prevent their due appreciation by the multitude.