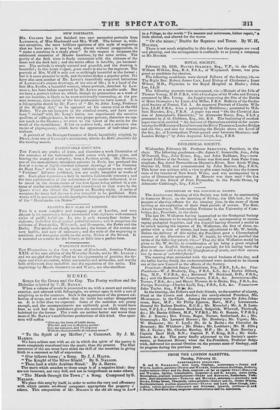 Songs for the Grave and the Gay. The Poetry written and the Melodies selected by T. H. BAYLY. When a volume of music is presented to us, with a smart and enticing exterior, and adorned with lithographs, we always open it with a sort of misgiving as to the contents. Such is the appearance of the present col- lection of songs, and we confess that its inside has rather disappointed us. It is better than we expected. Some of the melodies are pretty enough, and the accompaniments are uniformly good. It would have been as well had the publishers given the sources to which they were indebted for the former. The words are neither better nor worse than most of Mr. BAyny's multifarious productions of this kind. One speci- men will suffice.

"Give me the loves of turtle doves, Who bill and coo in shadowy groves :

Give me romance, and I'll dispense With the rhodomontade of common sense."