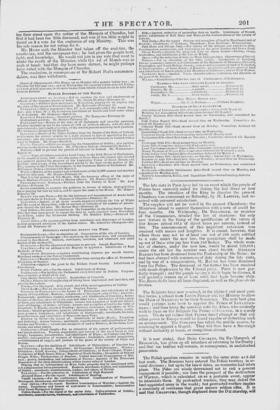 Page 9, 26 February 1831 — The Belgians have now received, in the plainest and most
Close

The Belgians have now received, in the plainest and most

posi- tive terms, a refusal from Louis PHILIP mid his Ministry to allow the Duke of NEMOURS to be their Sovereign. The next best plan would perhaps have been to appoint the Prince of LEUCHTEN-. BERG ; and thus bring the question with the Allies, who evidently wish to force on the Belgians the Prince. of ORANGE, to a speedy issue. We do not believe that France dared attempt or that any other power in Europe would be found capable of disturbing such an arrangement. The Congress has taken the middle course, by resolving to appoint a Regent. They will thus have a Sovereign without authority at home, or recognition abroad.