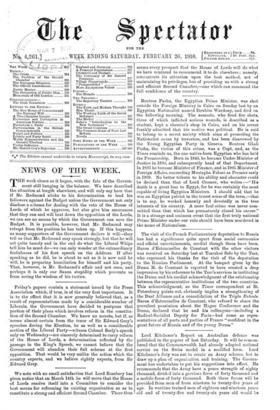 Page 1, 26 February 1910 — Boutros Pasha, the Egyptian Prime Minister, was shot outside the
Close

Boutros Pasha, the Egyptian Prime Minister, was shot outside the

Foreign Ministry in Cairo on Sunday last by an Egyptian Nationalist named Ibrahim Wardany, and died on the following morning. The assassin, who fired five shots, three of which inflicted serious wounds, is described as a student, kept a chemist's shop in Cairo, and on his arrest frankly admitted that his motive was politicaL He is said to belong to a secret -society which aims at promoting the Nationalist cause by terrorism, and has been disavowed by the Young Egyptian Party in Geneva. Boutros Ghali Pasha, the victim of this crime, was a Copt, and, as the Times reminds us, the one native-born Egyptian who has held the Premiership. Born in 1846, he became Under-Minister of Justice in 1886, and subsequently head of that Department. In 1893 he became Minister of Finance, and in 1905 Minister of Foreign Affairs, succeeding Mustapha Fehmi as Premier early in 1909. No better tribute to his ability and character could be devised than that of Lord Cromer, who writes :—" His death is a great loss to Egypt, for he was certainly the most capable of living Egyptian Ministers. I should add that he was an Egyptian patriot in the truest sense of the term,—that is to say, he worked honestly and devotedly in the true interests of his country. A more foul crime was never com- mitted than that which has prematurely closed his career." It is a strange and ominous event that the first truly national Prime Minister under our rule should have been murdered in the name of Nationalism.