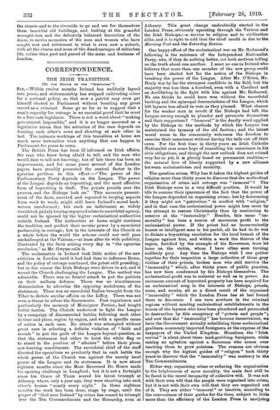 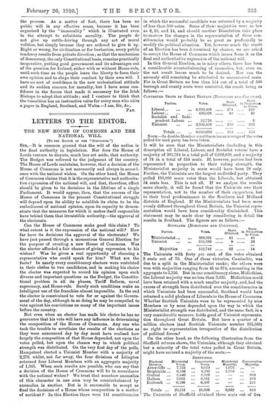 pro THE EDITOR 07 TUE " SPECTATOK."1 SIR,—Within twelve months Ireland has suddenly lapsed into peace, and statesmanship has stopped cultivating crime for a national policy, so that now a patriot may even get himself elected to Parliament without boasting any great record as a criminal. Some go so far as to suggest that a man's capacity for outrage is no essential proof that he must be a first-rate legislator. There is not a word about "making government impossible," and it is no longer assumed as a legislative axiom that the salvation of the race depends on hunting each other's cows and shooting at each other in bed. The intimate workings of this transition at home are much more instructive than anything that can happen in Parliament for years to come.

The British Press has been ill informed on Irish affairs, the man who knew being afraid to tell, and the man who would dare to tell not knowing; but of late there has been an improvement, and for some years several of the London papers have steadily presented the central factor in the agrarian problem to this effect :—" The power of the Parliamentary Party depends on the League. The power of the League depends on boycotting, and the most effective form of boycotting is theft. The priests preside over the process, and the Bishops look on." This accurate present- ment of the facts, asserted and repeated in varying aspects from week to week, might still leave Ireland's moral back- waters unreformed ; but such an indictment so widely circulated, plainly tracing organised crime to sacerdotal agency, could not be ignored by the higher ecclesiastical authorities outside Ireland. The authorities at home might continue the tradition and perfect their secular power by a sacerdotal partnership in outrage ; but in the interests of the Church as a whole before the world the scheme could not well pass unchallenged at the Vatican,—at least after its wide publicity, illustrated by the facts arising every day in "the agrarian revolution," as Mr. Gwynn calls it.

The ecclesiastics in Ireland took little notice of the new criticism in London until it had had time to influence Rome, and the policy of outrage continued, the priest still presiding ; but in due course the Irish Bishops were driven to act, and it meant the Church challenging the League. The method was admirable. There was no frontal attack to put the patriots on their uniform defence. There was no simultaneous denunciation to advertise the opposing melodrama of the statesmen. There was no sacerdotal Italian brought from the Tiber to dictate secular affairs on the Liffey. There was not even a threat to refuse the Sacraments. Past experience, and particularly the memory of Monsignor Persico, had taught better tactics. The Church undertook to fight the League by a campaign of disconnected battles following each other in time and place, region by region, and with a specific cause of action in each case. No attack was attempted without great care in selecting a definite violation of "faith and morals" to put the guilt of the League beyond question, so that the statesmen had either to hoist the white flag or to stand in the position of "atheists" before their pious, cow-hunting constituents. The sacerdotal chief of the staff directed the operations so prudently that in each battle the whole power of the Church was against the merely local power of the League and its statesmen. It is now about eighteen months since the Most Reverend Dr. Hoare made his opening challenge in Longford ; but it is not a fortnight since his Grace of Tuam scored his latest triumph at Athenry, where, only a year ago, they were shooting into each other's houses "nearly every night." In these eighteen months the work has been done, stage by stage, until the prayer of "God save Ireland" by crime has ceased to triumph 7ver the Ten Commandments and the Hierarchy, even at Athenry. This great change undoubtedly started in the London Press, obviously operating through the Vatican and the Irish Bishops,—a service to religion and to civilisation alike, and it is right to add that the chief credit is due to the Morning Post and the Saturday Review.

One happy effect of the ecclesiastical war on Mr. Redmond's following is the existence of the Independent Nationalist Party, who, if they do nothing better, set both sections telling us the truth about one another. I meet no one in Ireland who believes that more than one member of the new group could have been elected but for the action of the Bishops in breaking the power of the League. After Mr. O'Brien, Mr. Healy wa,s by far the strongest candidate in the field, but his majority was less than a hundred, even with a Cardinal and an Archbishop in the fight with him against Mr. Redmond. No one thinks he could have won without the sacerdotal backing and the episcopal denunciations of the League, which left laymen less afraid to vote as they pleased. What chance for the weaker men in revolt if the Bishops had left the League strong enough to plunder and persecute themselves and their supporters P "Immoral" is the deadly word applied by the Bishops to the methods by which the League has maintained the tyranny of the old faction ; and the latent moral sense in the community welcomes the freedom to exercise their conscience without having the tails cut off their cows. For the first time in thirty years an Irish Catholic Nationalist sees some hope of consulting his conscience in his civic obligations, and though the new outlook does not extend very far as yet, it is plainly based on permanent realities,— the natural love of liberty supported by a new alliance between ecclesiasticism and morality.

The question arises, Why has it taken the highest guides of religion more than thirty years to discover that the methodical organisation of crime and outrage was " immoral " ? The Irish Bishops were in a very difficult position. It would be idle to assume their ignorance of the fact that the power of the League depended on organising crime ; but by denouncing it they might set " patriotism " in conflict with "religion," and in that case the ecclesiastical power might lose more by the attempt to restore Christianity than by continuing to connive at the "immorality." Besides, this same "im- morality" has been a source of enormous profit to the ecclesiastical power. If the priest had an inconveniently honest or intelligent man in his parish, all he had to do was to dictate a boycotting resolution for the local branch of the League against him, and within a week the thieves of the region, fortified by the example of his Reverence, were let loose on the victim, whom I have often seen turning suddenly grey. Any time the Bishops wish I can gather together for their inspection a large collection of these grey victims of their priests, broken men who still survive the "immorality" which, after thirty years of public practice, has now been condemned by the Bishops themselves. The ecclesiastical profit was in material as well as in power. An enormous amount of boycotted property has been acquired for an ecclesiastical song in the interests of Bishops, priests, nuns, and monks, all as a direct result of the organised " immorality " which the London Press has at last forced them to denounce. I can turn nowhere in the criminal regions without meeting ecclesiastical establishments in the homes of the laymen who have been plundered and persecuted to destruction by this conspiracy of "priests and people"; and now that the "immorality" has become inconvenient, we have the Government actually subsidising these ecclesiastical grabbers, commonly imported foreigners, at the expense of the taxpayers of the United Kingdom. Meantime the "Irish revival" is silent about these land-grabbing foreigners, while raising an agitation against a Scotsman who comes over teaching them to grow potatoes. The reasons are obvious enough why the highest guides of " religion " took thirty years to discover that the " immorality " was contrary to the Ten Commandments.

Either way, organising crime or reducing the organisation to the helplessness of mere morality, the main fact still to be faced is the moral incapacity of collective will. It was not with their own will that the people were organised into crime, but it is not with their own will that they are organised out of it. They are either " immoral " or inactive, according to the convenience of their guides for the time, subject to little more than the efficiency of the London Press in analysing

the process. As a matter of fact, there has been no public will in any effective sense, because it has been organised by the "immorality" which is illustrated even in the attempt to substitute morality. The people do not give up cattle-driving through any act of moral volition, but simply because they are ordered to give it up. Right or wrong, for civilisation or for barbarism, every public tendency results from private direction ; so that the mechanism of democracy, the only Constitutional basis, remains practically inoperative, putting good government and its advantages out of the question for Ireland, either with or without Home-rule, until such time as the people learn the liberty to form their own opinion and to shape their conduct by their own will. I have no sort of confidence in the new ecclesiastical attitude and its sudden concern for morality, but I have some con- fidence in the forces that made it necessary for the Irish Bishops to adopt that attitude; and I venture to think that the transition has an instructive value for every man who edits a paper in England, Scotland, and Wales.—I am, Sir, &c., PAT.