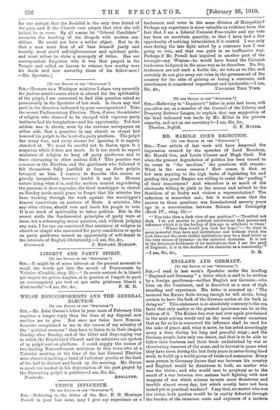 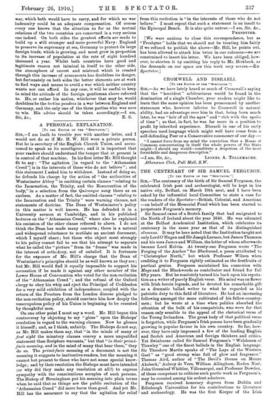 [To THE EDITOR OF THE "SPECTATOR."] SIR,—I read in last week's Spectator under the heading "England and Germany" a letter which is said to be written by a foreign gentleman—neither English nor German—who lives on the Continent, and is described as a man of high standing and experience. His letter is summed up : "The moment the Kaiser feels strong enough he will strike, being certain to have the bulk of the German nation at his back in doing so." This statement is so absolutely contrary to the rea facts that only malice or the greatest ignorance can be at the bottom of it. The Kaiser has over and over again proclaimed in the most solemn words and on the moat solemn occasions that as far as he is concerned his influence shall be used for the sake of peace, and, what is more, he has acted accordingly many a time during his long and peaceful reign ; and the German people have only one desire, and that is to be able to follow their business and their trade undisturbed by war or threatening rumours of the same, and to harvest in peace what they have sown during the last forty years in never-tiring hard work, to build up a world-power of trade and commerce. Every sane person in Germany knows that war between his country and England would be disastrous to both, no matter who was the victor; and who would care to prophesy as to the result of a war between two nations both fighting with new weapons of war which science invents more disastrous and terrible almost every day, but which mostly have not been tested yet in practical warfare P I say that, no matter who was the victor, both parties would be in reality defeated through the burden of the immense costs and expenses of a modern war, which both would have to carry, and for which no war indemnity could be an adequate compensation. Of course every one knows that the situation as far as the mutual relations of the two countries are concerned is a very serious one indeed. On both sides the greatest efforts are made to build up a still stronger and more powerful Navy : England to preserve its supremacy at sea, Germany to protect its large foreign trade, which is growing, and must grow in proportion to its increase of population at the rate of eight hundred thousand a year. Whilst both countries have good and Legitimate reason not inimical in itself to the other side, the atmosphere of unrest and mistrust which is created through this increase of armaments has doubtless its danger, but fortunately on both sides the better elements are at work to find ways and means to avoid a war which neither country wants nor can afford. In any case, it will be useful to keep in mind the attitude of the foreign gentleman above referred to. He, or rather his nation, whichever that may be, would doubtless be the tertius gaudens in a war between England and Germany, and the only one of the three parties who was sure to win. His advice should be taken accordingly.—I am,