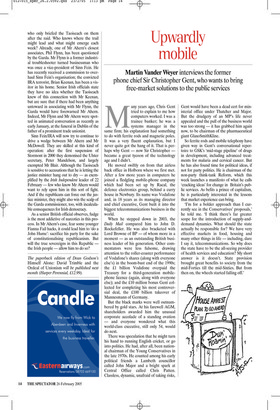 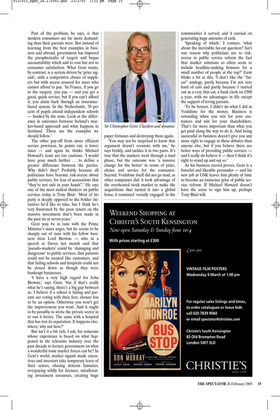 Martin Vander Weyer interviews the former phone chief Sir Christopher Gent, who wants to bring free-market solutions to the public services Many years ago, Chris Gent tried to explain to me how computers worked. I was a trainee banker; he was a systems manager in the same firm; his explanation had something to do with ferrite rods and magnetic poles. It was a very fluent explanation, but I never quite got the hang of it. That is perhaps why Gent — now Sir Christopher became a great tycoon of the technology age and I didn’t.

He moved swiftly on from that airless back office in Holborn where we first met. After a few more years in computers he joined a fledgling mobile-phone company which had been set up by Racal, the defence electronics group, behind a curry house in Newbury. Its name was Vodafone and, in 18 years as its managing director and chief executive, Gent built it into the biggest telecommunications business in the world.

When he stepped down in 2003, the Daily Mail compared him to John D. Rockefeller. He was also bracketed with Lord Browne of BP — of whom more in a moment — as an outstanding British business leader of his generation. Other commentators were less fulsome, drawing attention to the roller-coaster performance of Vodafone’s shares (along with everyone else’s) in the boom-bust end of the 1990s; the £1 billion Vodafone overpaid the Treasury for a third-generation mobilephone licence (again, along with everyone else); and the £10 million bonus Gent collected for completing his most controversial deal, the £100 billion takeover of Mannesmann of Germany.

But the black marks were well outnumbered by gold stars. At his farewell AGM, shareholders awarded him the unusual corporate accolade of a standing ovation — and everyone wondered what this world-class executive, still only 54, would do next.

There was speculation that he might turn his hand to running English cricket, or go into politics. He had, after all, been national chairman of the Young Conservatives in the late 1970s. He counted among his early political friends a Lambeth councillor called John Major and a bright spark at Central Office called Chris Patten. Classless, dynamic, unafraid of taking risks, Gent would have been a dead cert for ministerial office under Thatcher and Major. But the drudgery of an MP’s life never appealed and the pull of the business world was too strong — it has grabbed him again now, to be chairman of the pharmaceutical giant GlaxoSmithKline.

So ferrite rods and mobile telephony have given way in Gent’s conversational repertoire to GSK’s ‘mid-stage pipeline’ of drugs in development, including advanced treatments for malaria and cervical cancer. But he has also found time for political ideas, if not for party politics. He is chairman of the non-party think-tank Reform, which this week launches a manifesto of what he calls ‘cracking ideas’ for change in Britain’s public services. As befits a prince of capitalism, he is particularly interested in the lessons that market experience can bring.

‘I’m for a bolder approach than I currently see in the Conservatives’ proposals,’ he told me. ‘I think there’s far greater scope for the introduction of supply-anddemand dynamics. What should the state actually be responsible for? We have very effective markets in food, housing and many other things in life — including, dare I say it, telecommunications. So why does the state have to be the all-seeing provider of health services and education? My short answer is it doesn’t. State provision brought great benefits to society from the mid-Forties till the mid-Sixties. But from then on, the wheels started falling off.’ Part of the problem, he says, is that modern consumers are far more demanding than their parents were. But instead of learning from the best examples in business and abroad, government has imposed the paraphernalia of targets and bogus accountability which add to cost but not to consumer satisfaction. What Gent wants, by contrast, is a system driven by ‘price signals’, with a competitive choice of suppliers but with access assured for users who cannot afford to pay. ‘In France, if you go to the surgery, you pay — and you get a good, quick service; but if you can’t afford it, you claim back through an insurancebased system. In the Netherlands, 70 per cent of pupils attend independent schools — funded by the state. Look at the difference in outcomes between Ireland’s market-based approach and what happens in Scotland. These are the examples we should follow.’ The other pay-off from more efficient service provision, he points out, is lower taxes — and again he thinks Michael Howard’s team are too cautious. ‘I would have gone much further ... to define a greater difference between the parties. Why didn’t they? Probably because all politicians have become risk-averse about public services, for fear of accusations that “they’re not safe in your hands”.’ He says one of the most radical thinkers on public services today is Tony Blair. ‘Most of his party is deeply opposed to the bolder initiatives he’d like to take, but I think he’s very frustrated by the poor return on the massive investment that’s been made in the past six or seven years.’ Gent may be in tune with the Prime Minister’s inner urges, but he seems to be sharply out of tune with his fellow business titan Lord Browne — who in a speech at Davos last month said that ‘pseudo-markets’ could be ‘damaging and dangerous’ to public services, that patients could not be treated like customers, and that failing schools and hospitals could not be closed down as though they were bankrupt businesses.

‘I have a very high regard for John Browne,’ says Gent, ‘but if that’s really what he’s saying, there’s a big gap between us. I believe if a school is failing and parents are voting with their feet, closure has to be an option. Otherwise you won’t get the improvement you want. And it ought to be possible to invite the private sector in to run it better. The same with a hospital that has lost its reputation. It happens elsewhere; why not here?’ But isn’t it a bit rich, I ask, for someone whose experience is based on what happened in the telecoms industry over the past decade to lecture government on what a wonderful tonic market forces can be? In Gent’s world, market signals made executives and investors take temporary leave of their senses, chasing dotcom fantasies, overpaying wildly for licences, misallocating investment resources, creating huge paper fortunes and destroying them again.

‘You may not be surprised to know that argument doesn’t resonate with me,’ he says briskly, and tackles it in two parts. It’s true that the markets went through a mad phase, but the outcome was ‘a massive change for the better’ in terms of price, choice and service for the consumer. Second, Vodafone itself did not go mad, as other companies did: it took advantage of the overheated stock market to make the acquisitions that turned it into a global force; it remained ‘socially engaged’ in the communities it served; and it carried on generating huge amounts of cash.

‘Speaking of which,’ I venture, ‘what about the inevitable fat-cat question? Isn’t one reason why politicians are so riskaverse in public service reform the fact that market solutions so often seem to include headline-making bonuses for a small number of people at the top?’ Gent blinks a bit at this. ‘I don’t like the “fatcat” analogy, partly because I’m not very fond of cats and partly because I started out as a very thin cat, a bank clerk on £500 a year, with no advantages in life except the support of loving parents.

‘To be honest, I didn’t do what I did at Vodafone for the money. Business is rewarding when you win for your customers and win for your shareholders. That’s far more important than what you get paid along the way to do it. And being successful in business doesn’t give you any more right to engage in these debates than anyone else, but if you believe there are better ways of providing public services and I really do believe it — then I think it’s right to stand up and say so.’ As his business record proves, Gent is a forceful and likeable persuader — and his new job at GSK leaves him plenty of time to become an éminence grise of public service reform. If Michael Howard doesn’t have the sense to sign him up, perhaps Tony Blair will.