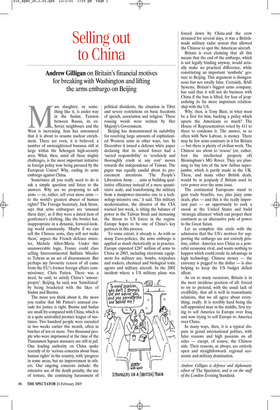 Selling out to China

Andrew Gilligan on Britain’s financial motives for breaking with Washington and lifting the arms embargo on Beijing Mass slaughter, or something like it, is under way in the Sudan. Tension between Russia, its exSoviet neighbours and the West is increasing. Iran has announced that it is about to resume nuclear enrichment. There are even, it is believed, a number of unstraightened bananas still at large within the Schengen high-security area. What, then, amid all these mighty challenges, is the most important initiative in foreign policy now being pursued by the European Union? Why, ending its arms embargo against China.

Sometimes all you really need to do is ask a simple question and listen to the answers. Why are we proposing to sell arms — or, rather, sell even more arms to the world’s greatest abuser of human rights? The Foreign Secretary, Jack Straw, says that arms embargoes are ‘unusual these days’, as if they were a dated item of gentlemen’s clothing, like the bowler hat, inappropriate in a dynamic, forward-looking world community. ‘Maybe if we can sell the Chinese arms, they will not make them,’ argues the French defence minister, Michele Alliot-Marie. Under this unanswerable logic, France could class selling Intercontinental Ballistic Missiles to Tehran as an act of disarmament. But perhaps my favourite reason of all came from the EU’s former foreign affairs commissioner, Chris Patten. There was a need, he said, to satisfy China’s ‘amourpropre’. Beijing, he said, was ‘humiliated’ by being bracketed with the likes of Sudan and Burma.

The more you think about it, the more you realise that Mr Patten’s unusual crusade for justice is right. Burma and Sudan are small fry compared with China, which is in a quite unrivalled premier league of nastiness. Two hundred people were executed in two weeks earlier this month, often in batches of ten or more. Two thousand people who were imprisoned at the time of the Tiananmen Square massacre are still in jail. One leading authority on China spoke recently of its ‘serious concerns about basic human rights’ in the country, with ‘progress in some areas, but no improvement in others. Our ongoing concerns include: the extensive use of the death penalty, the use of torture, the continuing harassment of political dissidents, the situation in Tibet and severe restrictions on basic freedoms of speech, association and religion.’ These rousing words were written by Her Majesty’s Government.

Beijing has demonstrated its suitability for receiving large amounts of sophisticated Western arms in other ways, too. In December it issued a defence white paper declaring that its armed forces had a ‘sacred responsibility’ to ‘resolutely and thoroughly crush at any cost’ moves towards the independence of Taiwan. The paper was equally candid about its procurement intentions. ‘The People’s Liberation Army ... aims at building qualitative efficiency instead of a mere quantitative scale, and transforming the military from a manpower-intensive one to a technology-intensive one,’ it said. This military modernisation, the director of the CIA warned last week, is tilting the balance of power in the Taiwan Strait and increasing the threat to US forces in the region. Europe hopes to be one of China’s key partners in this process.

To some extent, it already is. As with so many Euro-policies, the arms embargo is applied as much rhetorically as in practice. Europe exported £287 million of arms to China in 2003, including electronic equipment for military use, bombs, torpedoes and rockets, chemical and biological toxic agents and military aircraft. In the 2001 incident where a US military plane was forced down by China and the crew detained for several days, it was a Britishmade military radar system that allowed the Chinese to spot the American aircraft.

Britain is even claiming that all this means that the end of the embargo, which is not legally binding anyway, would actually make no practical difference, while constituting an important ‘symbolic’ gesture to Beijing. This argument is disingenuous but not totally false. Certainly, BAE Systems, Britain’s biggest arms company, has said that it will not do business with China if the ban is lifted, for fear of jeopardising its far more important relationship with the US.

Why, then, is Tony Blair, in what must be a first for him, backing a policy which upsets the Americans so much? The House of Representatives voted by 411 to three to condemn it. The answer, as so often with New Labour, is money. There may be few arms contracts in it for Britain — but there is plenty of civilian work. The Chinese are about to ‘rescue’ (or, rather, loot the intellectual property of) Birmingham’s MG Rover. They are planning to buy lots of the new Airbus superjumbo, which is partly made in the UK. These, and many other British deals, would be in jeopardy if Britain used its veto power over the arms issue.

The continental Europeans stand to gain trade benefits, too, plus juicy arms deals, plus — and this is the really important part — an opportunity to cock a snook at the United States and build ‘strategic alliances’ which can project their continent as an alternative pole of power to the Great Satan.

Let us complete this circle with the admission that the US’s motives for supporting the embargo are not entirely pristine, either. America sees China as a powerful economic rival, and wants nothing to happen which could erode its advantage in high technology. Chinese money — the currency is pegged to the dollar — is also helping to keep the US budget deficit afloat.

As on so many occasions, Britain is in the most invidious position of all: forced to try to pretend, with the usual lack of credibility, that all is well in transatlantic relations, that we all agree about everything, really. It is terribly hard being the self-appointed man in the middle, first trying to sell America to Europe over Iraq and now trying to sell Europe to America over China.

In many ways, then, it is a typical dispute in grand international politics, with false reasons and high passions on all sides — except, of course, the Chinese side. Their reasons, as always, are entirely open and straightforward: regional economic and military domination.

Andrew Gilligan is defence and diplomatic editor of The Spectator, and is on the staff of the London Evening Standard.