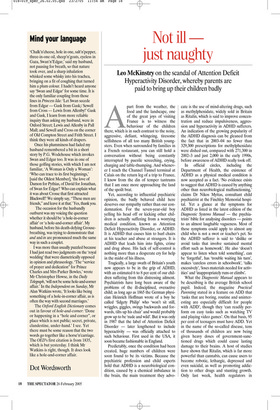 ‘Chalk’n’cheese, hole in one, salt’n’pepper, three-in-one oil, sheep’n’goats, eyeless in Gaza, Swan’n’Edgar,’ said my husband, not pausing for breath, so that nature took over, and a sharp inhalation whisked some whisky into his trachea, bringing on a fit of coughing that turned him a plum colour. I hadn’t heard anyone say ‘Swan and Edgar’ for some time. It is the only familiar coupling from those lines in Princess Ida: ‘Let Swan secede from Edgar — Gask from Gask;/ Sewell from Cross — Lewis from Allenby!’ Gask and Gask, I learn from more reliable inquiry than asking my husband, were in Oxford Street; Lewis and Allenby in Pall Mall; and Sewell and Cross on the corner of Old Compton Street and Frith Street. I think they were all kinds of drapers.

Once his plumminess had faded my husband remembered a bit in a short story by P.G. Wodehouse which invokes Swan and Edgar too. It was in one of those golfing stories, with which I am not familiar, ‘A Woman is Only a Woman’: ‘Who can trace to its first beginnings,’ [said the Oldest Member], ‘the love of Damon for Pythias, of David for Jonathan, of Swan for Edgar? Who can explain what it was about Crosse that first attracted Blackwell? We simply say, “These men are friends,” and leave it at that.’ Yes, thank you.

The occasion for the husbandly outburst was my voicing the question whether it should be ‘a hole-in-corner affair’ or ‘a hole-and-corner affair’. My husband, before his death-defying Grousebreathing, was trying to demonstrate that and and in are pronounced much the same way in such a couplet.

I was more than usually puzzled because I had just read two judgments on the ‘royal wedding’ that were diametrically opposed in opinion and phraseology. ‘The “service of prayer and dedication” for Prince Charles and Mrs Parker Bowles,’ wrote Mr Christopher Howse, in the Daily Telegraph, ‘will not be some hole-and-corner affair.’ In the Independent on Sunday, Mr Alan Watkins wrote, ‘It looks like being something of a hole-in-corner affair, as is often the way with second marriages.’ The Oxford English Dictionary comes out in favour of hole-and-corner: ‘Done or happening in a “hole and corner”, or place which is not public; secret, private, clandestine, under-hand.’ I see. Yet there must be some reason that the two words go together like a horse’n’carriage. The OED’s first citation is from 1835, which is but yesterday. I think Mr Watkins is right, though. It does look like a hole-and-corner affair.