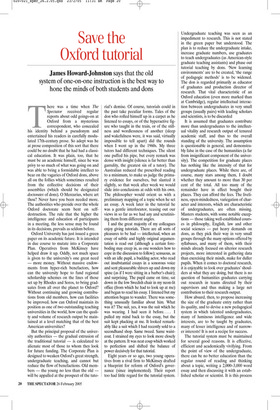 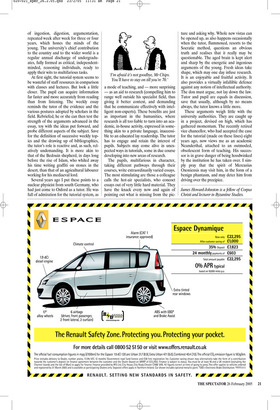 Save the Oxford tutorial

James Howard-Johnston says that the old system of one-on-one instruction is the best way to hone the minds of both students and dons There was a time when The Spectator received regular reports about odd goings-on at Oxford from a mysterious correspondent, who concealed his identity behind a pseudonym and entertained his readers in carefully modulated 17th-century prose. So adept was he at prose composition of this sort that there could be no doubt that he had had a classical education. It was plain, too, that he must be an academic himself, since he was privy to so much of what was going on and was able to bring a formidable intellect to bear on the vagaries of Oxford dons, above all on the follies which sometimes resulted from the collective decisions of their assemblies (which should be designated doctorates of dons). O Mercurius, where art thou? Never have you been needed more. The authorities who preside over the whole Oxford doctorate seem bent on selfdestruction. The rule that the higher the intelligence and education of participants in a meeting, the less sense may be found in its decisions, prevails as seldom before.

Oxford University has just issued a green paper on its academic future. It is intended in due course to mutate into a Corporate Plan. Operatives from McKinsey have helped draw it up. Oddly, not much space is given to the university’s one great need — more money. Without massive endowments from hyper-rich benefactors, how can the university hope to fund regional scholarship schemes on the lines of those set up by Rhodes and Soros, to bring graduates from all over the planet to Oxford? Without continuing and growing contributions from old members, how can facilities be improved, how can Oxford maintain its position as one of two outstanding teaching universities in the world, how can the quality and volume of research output be maintained at a level matching that of the best American universities?

But the principal proposal of the university authorities — the gradual extrusion of the traditional tutorial — is calculated to alienate most of those to whom they look for future funding. The Corporate Plan is designed to weaken Oxford’s great strength, undergraduate teaching, and cannot but reduce the flow of benefactions. Old members — the young no less than the old will be appalled at the prospect of the tuto rial’s demise. Of course, tutorials could in the past take peculiar forms. Tales of the don who rolled himself up in a carpet as he listened to essays, or of the hyperactive figure who taught in the train, or of the stillness and wordlessness of another (sleep and wakefulness were, it was said, virtually impossible to tell apart) did the rounds when I went up in the 1960s. My three tutors had different techniques. The silent one puffed his pipe, but every remark was dense with insight (silence is far better than garrulity, the greatest sin of a tutor). The Australian reduced the prescribed reading to a minimum, to make us judge the primary evidence for ourselves, but slanted it slightly, so that week after week we would slide into conclusions at odds with his own. The philosopher would orient us with a preliminary mapping of a topic when he set an essay. A week later in the tutorial he was a gentle interlocutor, teasing out our views in so far as we had any and scrutinising them from different angles.

I and the great majority of my colleagues enjoy giving tutorials. There are all sorts of pleasures to be had — intellectual, when an essay of subtle and highly original argumentation is read out (although a certain foreboding may creep in, as one wonders how to cope in the discussion to follow); sensuous, as with an idle pupil, a budding actor, who read out insubstantial essays in a sonorous voice and sent pleasurable shivers up and down my spine (as if I were sitting in a barber’s chair); and surprising. The pupil came on time, sat down in the low Swedish chair in my neon-lit office (from which he had to look up at me) and began to read his essay. I listened but my attention began to wander. There was something unusually familiar about him. What was it? The suit, yes, it was the suit which he was wearing. I had seen it before.... I pulled my mind back to the essay, but the suit kept plucking at me. It looked remarkably like a suit which I had recently sold to a secondhand shop. Same tweed. Same waistcoat. I strained my eyes to look more closely at the pattern. It was neat coup which worked to perfection and shifted the balance of power decisively for that tutorial.

Eight years or so ago, two young operatives from a rival firm to McKinsey drafted a blueprint for reform of Oxford’s governance (since implemented). Their report too had little regard for the tutorial system. Undergraduate teaching was seen as an impediment to research. This is not stated in the green paper but understood. The plan is to reduce the undergraduate intake, increase graduate numbers, use graduates to teach undergraduates (as American-style graduate teaching assistants) and phase out tutorial teaching by dons. ‘New learning environments’ are to be created, ‘the range of pedagogic methods’ is to be widened. The don is regarded primarily as educator of graduates and production director of research. That vital characteristic of an Oxford education (even more marked than at Cambridge), regular intellectual interaction between undergraduates in very small groups (usually pairs) with leading scholars and scientists, is to be discarded It is assumed that graduates contribute more than undergraduates to the intellectual vitality and research output of tenured academic staff, and thus to the overall standing of the university. The assumption is questionable in general, and demonstrably false in the case of the humanities (a far from insignificant component of the university). The competition for graduate places has nothing like the intensity of that for undergraduate places. While there are, of course, many stars among them, I doubt whether they amount to more than 30 per cent of the total. All too many of the remainder have in effect bought their places. They can afford the fees. The liveliness, open-mindedness, variegation of character and interests, which are characteristic of undergraduates, are often missing. Masters students, with some notable exceptions — those taking well-established courses in philosophy, English, law and other social sciences — put heavy demands on dons, as they pick their way in very small groups through the many options offered by syllabuses, and many of them, with their minds already focused on ulterior research projects, more interested in gathering data than exercising their minds, make for duller pupils. When it comes to doctoral research, it is enjoyable to look over graduates’ shoulders at what they are doing, but there is no question of humanities graduates carrying out research in teams directed by their supervisors and thus making a large net contribution to their research output.

The tutorial system must be maintained for several good reasons. It is effective, efficient and academically vivifying. From the point of view of the undergraduate, there can be no better education than the regular round of reading and thinking about a topic, writing a 2,000–3,000 word essay and then discussing it with an established scholar or scientist. It is this process of ingestion, digestion, argumentation, repeated week after week for three or four years, which hones the minds of the young. The university’s chief contribution to the country and to the wider world is a regular annual discharge of undergraduates, fully formed as critical, independentminded, reasoning individuals, ready to apply their wits to multifarious tasks.

At first sight, the tutorial system seems to be wasteful of staff resources in comparison with classes and lectures. But look a little closer. The pupil can acquire information far faster and more accurately from reading than from listening. The weekly essay reminds the tutor of the evidence and the various postures adopted by scholars in the field. Rebriefed, he or she can then test the strength of the arguments advanced in the essay, toy with the ideas put forward, and probe different aspects of the subject. Save for the definition of successive weekly topics and the drawing up of bibliographies, the tutor’s role is reactive and, as such, relatively undemanding. It is more akin to that of the Bedouin shepherd, in days long before the rise of Islam, who whiled away his time writing graffiti on stones in the desert, than that of an agricultural labourer working for his mediaeval lord.

Several years ago I put these points to a nuclear physicist from south Germany, who had just come to Oxford as a tutor. He was full of admiration for the tutorial system, as a mode of teaching, and — more surprising — as an aid to research (compelling him to range well outside his specialist field, thus giving it better context, and demanding that he communicate effectively with intelligent non-experts). These benefits are just as important in the humanities, where research is all too liable to turn into an academic, in-house activity, expressed in something akin to a private language, inaccessible to an educated lay readership. The tutor has to engage and retain the interest of pupils. Subjects may come alive in unexpected ways in tutorials, some in due course developing into new areas of research.

The pupils, multifarious in character, taking different pathways through their courses, write extraordinarily varied essays. The most stimulating are those a colleague calls the hot-air specialists, who concoct essays out of very little hard material. They have the knack every now and again of pointing out what is missing from the pic

James Howard-Johnston is a fellow of Corpus Christi and lecturer in Byzantine Studies. ture and asking why. Whole new vistas can be opened up, as also happens occasionally when the tutor, flummoxed, resorts to the Socratic method, questions an obvious truth and realises that it really may be questionable. The aged brain is kept alert and sharp by the energetic and ingenious arguments of the young. Fresh ideas take shape, which may one day infuse research. It is an enjoyable and fruitful activity. It also provides a virtually infallible defence against any notion of intellectual authority. The don must argue, not lay down the law. Tutor and pupil are equals in discussion, save that usually, although by no means always, the tutor knows a little more.

These arguments weigh little with the university authorities. They are caught up in a project, devised on high, which has gathered momentum. The recently retired vice chancellor, who had accepted the case for the tutorial (made on these lines) eight years ago, now views me as an academic Neanderthal, attached to an outmoded, obsolescent form of teaching. His successor is in grave danger of being hoodwinked by the institution he has taken over. I simply pray that the spirit of Mercurius Oxoniensis may visit him, in the form of a benign phantasm, and may deter him from driving over the precipice.