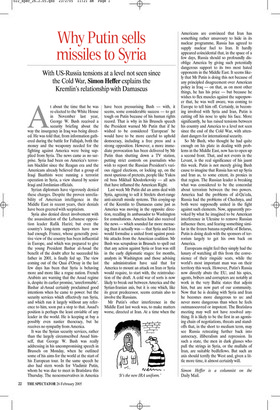 Why Putin sells missiles to Syria

With US-Russia tensions at a level not seen since the Cold War, Simon Heffer explains the Kremlin’s relationship with Damascus At about the time that he was re-elected to the White House in November last year, George W. Bush received a security briefing about the way the insurgency in Iraq was being directed. He was told that, from information gathered during the battle for Fallujah, both the money and the weaponry needed for the fighting against America were being supplied from Syria. The news came as no surprise. Syria had been on America’s terrorism blacklist since the Reagan era and the Americans already believed that a group of Iraqi Baathists were running a terrorist operation in Syria, a view shared by senior Iraqi and Jordanian officials.

Syrian diplomats have vigorously denied these charges. Despite the proven unreliability of American intelligence in the Middle East in recent years, their denials have been greeted with scepticism.

Syria also denied direct involvement with the assassination of the Lebanese opposition leader Rafik Hariri; but even the country’s long-term supporters have now had enough. France, whose generally positive view of the country has been influential in Europe, and which was prepared to give the young President Bashar al-Assad the benefit of the doubt after he succeeded his father in 2001, is finally fed up. The view coming out of the Quai d’Orsay in the last few days has been that Syria is behaving more and more like a rogue nation. French Arabists are warning that the Assad regime is, despite its earlier promise, ‘unreformable’. Bashar al-Assad certainly proclaimed good intentions when he came to power: but the security services which effectively run Syria, and which run it largely without any reference to him, soon put a stop to that. Assad’s position is perhaps the least enviable of any leader in the world. He is keeping at bay a possibly even nastier theocracy, but he receives no sympathy from America.

It was the Syrian security services, rather than the largely circumscribed Assad himself, that George W. Bush was really addressing in his uncompromising speech in Brussels on Monday, when he outlined some of his aims for the world at the start of his European tour. In the same speech he also had stern words for Vladimir Putin, whom he was due to meet in Bratislava this Thursday. The neoconservatives in America have been pressurising Bush — with, it seems, some considerable success — to get tough on Putin because of his human rights record. That is why in his Brussels speech the President warned Mr Putin that if he wished to be considered ‘European’ he would have to be more careful to uphold democracy, including a free press and a strong opposition. However, a more immediate provocation has been delivered by Mr Putin than shutting down a TV station, putting strict controls on journalists who wish to report the Russian President’s various rigged elections, or locking up, on the most spurious of pretexts, people like Yukos oil boss Mikhail Khodorkovsky — all acts that have inflamed the American Right.

Last week Mr Putin did an arms deal with Syria, agreeing to sell it Strelets short-range anti-aircraft missile systems. This cosying-up of the Kremlin to Damascus came just as America was moving in the opposite direction, recalling its ambassador to Washington for consultations. America had also received the news — which sounded far more menacing than it actually was — that Syria and Iran would formalise a united front against possible attacks from the American coalition. Mr Bush was scrupulous in Brussels to spell out that any action against Syria or Iran was still in the early diplomatic stages: for months, analysts in Washington and those advising the administration have said that for America to mount an attack on Iran or Syria would require, to start with, the reintroduction of the draft. A cold war of sorts is now likely to break out between America and the Syrian-Iranian axis, but it is one which, like its great predecessor, seems certain also to involve the Russians.

Mr Putin’s other interference in the Middle East last week was, to make matters worse, directed at Iran. At a time when the Americans are convinced that Iran has something rather unsavoury to hide in its nuclear programme, Russia has agreed to supply nuclear fuel to Iran. It hardly appeared coincidental that, in the space of a few days, Russia should so profoundly disoblige America by giving such potentially dangerous support to its two most hated opponents in the Middle East. It seems likely that Mr Putin is doing this not because of any principled disagreement over American policy in Iraq — on that, as on most other things, he has his price — but because he wishes to flex muscles against the superpower that, he was well aware, was coming to Europe to tell him off. Certainly, in becoming involved with Syria and Iran, Putin is cutting off his nose to spite his face. More significantly, he has raised tensions between his country and America to a level not seen since the end of the Cold War, with attendant dangers for international security.

So Mr Bush, who thought he had quite enough on his plate in dealing with problems in the Middle East, now has to open up a second front. That, and not events in the Levant, is the real significance of his jaunt this week. Putin is not merely giving Bush cause to imagine that Russia has set up Syria and Iran as, to some extent, its proxies in that region. The Russian leader is breaking what was considered to be the concordat about terrorism between the two powers. America had the problems of al-Qa’eda, Russia had the problems of Chechnya, and both were supposedly united in the fight against such elements. Now, apparently provoked by what he imagined to be American interference in Ukraine to remove Russian influence there, and fearing something similar in the frozen banana republic of Belarus, Putin is doing deals with the sponsors of terrorism largely to get his own back on America.

Europeans might feel they simply had the luxury of watching all this from the convenience of their ringside seats, while the world’s most important man was on their territory this week. However, Putin’s Russia now directly abuts the EU, and his spies, agents, bribers and corrupters are notably at work in the very Baltic states that adjoin him, but are now part of our community. Now that he is dealing with Syria and Iran he becomes more dangerous to us: and never more dangerous than when he feels outmanoeuvred or impotent. The Bratislava meeting may well not have resolved anything. It is likely to be the first in an agonising chain of negotiations, threats and standoffs that, in the short to medium term, may see Russia retreating further back into autocracy, illiberalism and repression. In such a state, the men in dark glasses who pull the strings in Syria, or the mullahs of Iran, are suitable bedfellows. But such an axis should terrify the West and, given a little more time, it almost certainly will.

Simon Heffer is a columnist on the Daily Mail.