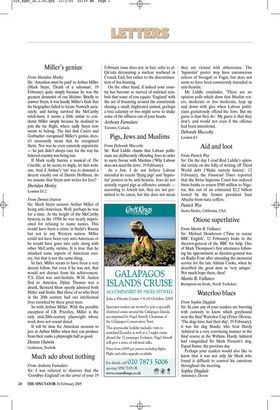 Sir: Rod Liddle claims that Labour politicians are deliberately offending Jews in order to curry favour with Muslims (‘Why Labour does not need the Jews’, 19 February).

As a Jew, I do not believe Labour intended its recent ‘flying pigs’ and ‘hypnotist’ posters to be anti-Semitic. Jews do not actually regard pigs as offensive animals according to Jewish law, they are not permitted to be eaten, but this does not mean they are viewed with abhorrence. The ‘hypnotist’ poster may have unconscious echoes of Svengali or Fagin, but does not seem to have been consciously intended as anti-Semitic.

Mr Liddle concludes, ‘There are no opinion polls which show that Muslim voters, moderate or less moderate, leap up and down with glee when Labour politicians gratuitously offend the Jews. But my guess is that they do.’ My guess is that they don’t, and would not even if the offence had been intentional.