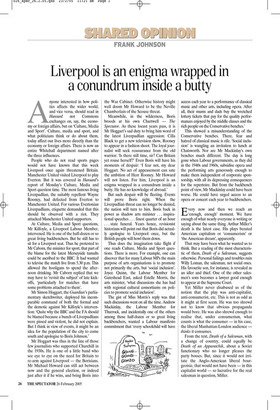 Page 19, 26 February 2005 — Liverpool is an enigma wrapped in a conundrum inside a butty
Close

Liverpool is an enigma wrapped in a conundrum inside a butty

Anyone interested in how politics affects the wider world, and vice versa, should read in Hansard not Commons exchanges on, say, the economy or foreign affairs, but on ‘Culture, Media and Sport’. Culture, media and sport, and what politicians think or do about them, today affect our lives more directly than the economy or foreign affairs. There is now an entire Whitehall department named after the three influences.

People who do not read sports pages would not have known that this week Liverpool once again threatened Britain. Manchester United visited Liverpool to play Everton. But it was covered in Hansard’s report of Monday’s Culture, Media and Sport question time. The most famous living Liverpudlian, the suitably repellent Wayne Rooney, had defected from Everton to Manchester United. For various Evertonian Liverpudlians, etiquette demanded that this should be observed with a riot. They attacked Manchester United supporters.

At Culture, Media and Sport questions, Mr Kilfoyle, a Liverpool Labour Member, intervened. He is one of the half-dozen or so great living backbenchers. But he still has to sit for a Liverpool seat. Thus he protested to Mr Caborn, the minister for sport, that part of the blame for the latest Merseyside tumults could be ascribed to the BBC. It had wanted to televise the match live from 5.30 p.m. This allowed the hooligans to spend the afternoon drinking. Mr Caborn replied that we may have to ‘revisit the subject’ of late kickoffs, ‘particularly for matches that have some problems attached to them’.

Mr Simon Hoggart, the Guardian’s parliamentary sketchwriter, deployed his incomparable command of both the formal and the demotic against Mr Kilfoyle’s intervention: ‘Quite why the BBC and the FA should be blamed because a bunch of Liverpudlians were pissed and violent, he did not explain. But I think in view of events, it might be an idea for the population of the city to come south and apologise to Boris Johnson.’ Mr Hoggart was thus in the line of those few journalists who supported Churchill in the 1930s. He is one of a little band who see eye to eye on the need for Britain to re-arm against Liverpool — the Borisians. Mr Michael Howard can still act between now and the general election, or indeed just after it if he wins, and bring Boris into the War Cabinet. Otherwise history might well doom Mr Howard to be the Neville Chamberlain of the Scouse threat.

Meanwhile, in the wilderness, Boris broods at his own Chartwell — The Spectator. As these locust years pass, it is Mr Hoggart’s sad duty to bring him word of the latest Liverpudlian aggression: Cilla Black to get a new television show, Rooney to appear in a fashion shoot. The loyal journalist will seek reassurance from the old warrior: ‘Is there still time, sir? Can Britain yet rouse herself?’ Even Boris will have his moments of despair: ‘I fear not, my dear Hoggart. No act of appeasement can sate the ambition of Herr Rooney. Mr Howard will not listen. For him, Liverpool is an enigma wrapped in a conundrum inside a butty. He has no knowledge of abroad.’ But such despair will be fleeting. Events will prove Boris right. When the Liverpudlian threat can no longer be denied, the nation will turn to him. Boris back in power as shadow arts minister ... inspirational speeches ... finest quarter of an hour ... state funeral. Years hence, revisionist historians will point out that Boris did actually apologise to Liverpool once, but the British people will howl them down.

Thus does the imagination take flight if one reads Culture, Media and Sport questions. There is more. For example, one can discover that for many Labour MPs the main purpose of arts organisations is to promote not primarily the arts, but ‘social inclusion’. Joyce Quinn, the Labour Member for Gateshead East, asked Estelle Morris, the arts minister, ‘what discussions she has had with regional cultural consortiums on policies to promote social inclusion’.

The gist of Miss Morris’s reply was that such discussions went on all the time. Andrew Mackinlay, the Labour Member for Thurrock, and incidentally one of the others among those half-dozen or so great living backbenchers, wanted a Labour manifesto commitment that ‘every schoolchild will have access each year to a performance of classical music and other arts, including opera. After all, their mums and dads buy the wretched lottery tickets that pay for the quality performances enjoyed by the middle classes and the rich people on the Conservative benches.’ This showed a misunderstanding of the Conservative benches. There, fear and hatred of classical music is rife. ‘Social inclusion’ is wangling an invitation to lunch at Chatsworth. Nor are Mr Mackinlay’s own benches much different. The day is long gone when Labour governments, as they did in the 1940s and 1960s, subsidise opera and the performing arts generously enough to make them independent of corporate sponsorship, with all its depressing consequences for the repertoire. But from the backbench point of view, Mr Mackinlay could have been worse. He could have urged access to an opera or concert each year to backbenchers.

Every now and then we reach an ‘enough, enough’ moment. We have enough of what nearly everyone is writing or saying about the same thing. Arthur Miller’s death is the latest case. His plays berated American capitalism or ‘consumerism’ or ‘the American dream’, apparently.

That may have been what he wanted us to think. But a reading of the most characteristic of them, Death of a Salesman, suggests otherwise. Personal failings and troubles ruin Willy Loman, the salesman, not social ones. His favourite son, for instance, is revealed as an idler and thief. One of the other salesmen’s sons becomes a lawyer good enough to appear at the Supreme Court.

Yet Miller never disabused us of the notion that the play was anti-capitalist, anti-consumerist, etc. This is not as odd as it might at first seem. He was too shrewd not to know that obvious propaganda would bore. He was also shrewd enough to realise that, under consumerism, what counts is what the consumer — in his case, the liberal Manhattan-London audience thinks it consumes.

From the text, Death of a Salesman, with a change of country, could equally be Death of an Apparatchik, about a Soviet functionary who no longer pleases the party bosses. But, since it would not irritate the Anglo-American liberal bourgeoisie, that would not have been — in this capitalist world — so lucrative for the real salesman in question, Miller.