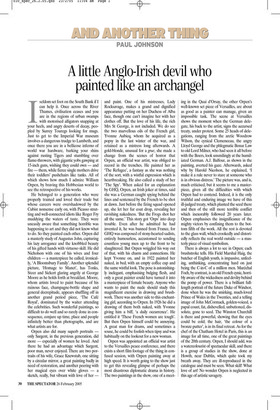 Page 21, 26 February 2005 — A little Anglo-Irish devil who painted like an archangel
Close

A little Anglo-Irish devil who painted like an archangel

Iseldom set foot on the South Bank if I can help it. Once across the River Thames, civilisation ceases and you are in the regions of urban swamps with motorised alligators snapping at your heels, and angry deserts of decay, peopled by Surrey Touregs looking for mugs. Just to get to the Imperial War museum involves a dangerous trudge to Lambeth, and once there you are in a bellicose inferno of world war hardware, barking your shins against rusting Tigers and stumbling over flame-throwers, with gigantic yobs gawping at 15-inch guns, wishing they could own — and fire — them, while fierce single mothers drive their toddlers’ pushchairs like tanks. All of which shows how much I admire William Orpen, by braving this Hobbesian world to see the retrospective of his works.

He belonged to a generation who were properly trained and loved their trade but whose careers were overshadowed by the Cubist nonsense early on, with Picasso strutting and well-connected idiots like Roger Fry muddying the waters of taste. They were uneasily aware that something horrible was happening to art and they did not know what to do. So they painted each other. Orpen did a masterly study of Augustus John, capturing his lazy arrogance and the knobbled beauty of his gifted hands with virtuoso skill. He did Nicholson with one of his wives and four children — a masterpiece he called, ironically, ‘A Bloomsbury Family’. Another splendid picture, ‘Homage to Manet’, has Tonks, Steer and Sickert glaring angrily at George Moore as he holds forth at breakfast. Moore, whom artists loved to paint because of his ruinous face, champagne-bottle shape and general decrepitude, appears shuffling off in another grand period piece, ‘The Café Royal’, dominated by the waiter attending the celebrities. Such wonderful paintings, so difficult to do well and so rarely done in consequence, conjure up time, place and people infinitely better than photographs, and are what artists are for.

Orpen also did many superb portraits only Sargent, in the previous generation, did more — especially of women he loved. And there he had an advantage which Sargent, poor man, never enjoyed. There are two portraits of his wife, Grace Knewstub, one sitting by a circular mirror, a great painting badly in need of restoration, and another peering with her magical eyes over white gloves — a sketch, really, but vibrant with love of her — and paint. One of his mistresses, Lady Rocksavage, makes a grand and dignified appearance putting on her Duchess of Alba face, though one can’t imagine her with her clothes off. But the love of his life, the rich Mrs St George, is not included. We do see the two marvellous oils of the French girl, Yvonne Aubicq, whom he acquired as a popsy in the last winter of the war, and retained as a mistress long afterwards. A gold-blonde, unusual for a grue, she made a change from the scenes of horror that Orpen, an official war artist, was obliged to record in the trenches. He painted her as ‘The Refugee’, a fantasy as she was nothing of the sort, with a wistful expression which is heartbreaking. He also called a study of her ‘The Spy’. When asked for an explanation by GHQ, Orpen, an Irish joker at times, said she was a German caught spying behind the lines and sentenced by the French to be shot at dawn. Just before the firing squad opened up, she let her fur coat drop, revealing her ravishing nakedness. ‘But the Frogs shot her all the same.’ This story got ‘Orps’ into deep trouble. Even after he admitted he had invented it, he was banned from France, for GHQ was composed of stony-hearted sadists, entirely humourless, accustomed to sending countless young men up to the front to be slaughtered. But Orpen wriggled his way out of that, with his charm and connections. He kept Yvonne on, and in 1922 painted her naked, in bed, with an empty coffee cup and the same wistful look. The pose is astonishingly inelegant, emphasising bulging flesh, and only a great painter could have turned it into a masterpiece of female beauty. Anyone who wants to paint the nude should study this magnificent exercise in drawing and brushwork. There was another side to this enchanting girl, according to Orpen. In 1926 he did a drawing of them both naked, with Yvonne giving him a biff, ‘a daily occurrence’. He entitled it ‘These French women are tough’. But then Orpen himself could be annoying. A great man for drams, and sometimes a souse, he could be foolish when tipsy and was habitually on the lookout for a new woman.

Orpen was appointed an official war artist to the Versailles peace conference, and there exists a short film footage of the thing in confused session, with Orpen painting away at high speed. It is worth going to the show just to get this revealing glimpse of perhaps the most disastrous diplomatic drama in history. The two paintings in the show, one of a meet ing in the Quai d’Orsay, the other Orpen’s well-known set piece of Versailles, are about as good as a painter can manage, given an impossible task. The scene at Versailles shows the moment when the German delegate, his back to the artist, signs the accursed treaty, under protest. Some 25 heads of delegations, ranging from the arctic Woodrow Wilson, the cynical Clemenceau, the angry Lloyd George and the phlegmatic Bonar Law to old Lord Milner, who had seen it all before with the Boers, look unsmilingly at the humiliated German. A.J. Balfour, as shown in the painting, averted his gaze. Afterwards, asked why by Harold Nicolson, he explained, ‘I make it a rule never to stare at someone who is in obvious distress.’ The picture was, and is, much criticised, but it seems to me a masterpiece, given all the difficulties with which Orpen had to contend. Indeed, it is the only truthful and enduring image we have of this ill-judged treaty, which planted the seed there and then of the still more terrible conflict which inexorably followed 20 years later. Orpen emphasises the insignificance of the mighty victors by confining them to the bottom fifth of the work. All the rest is devoted to the glass wall, which crookedly and distortedly reflects the real world outside — a masterly piece of visual symbolism.

There is always a lot to see in Orpen; each brushstroke tells. His Field Marshal Haig, the butcher of English youth, is impassive, unfeeling, unthinking, concentrating hard on just being the C-in-C of a million men. Maréchal Foch, by contrast, is an old French cynic, horribly aware of the wickedness and devilry behind the pomp of power. There is a brilliant fulllength portrait of the future Duke of Windsor, done when he was the smirking, much-loved Prince of Wales in the Twenties, and a telling image of John McCormack, golden-voiced, a papal count, fat, dishevelled, unbuttoned, dissolute, gone to seed. The Winston Churchill is there and powerful, showing that the eyes could be cold; the hair, ‘the colour of a bronze putter’, is in its final retreat. As for the chef of the Chatham Hotel in Paris, this is an image for all time, one of the great paintings of the 20th century. Orpen, I should add, was a watercolourist of spectacular skill, and there is a group of studies in the show, done at Howth, near Dublin, which quite took my breath away. They are ill-reproduced in the catalogue and must be seen. What skill! What love of art! No wonder Orpen is neglected in this age of artistic savagery.