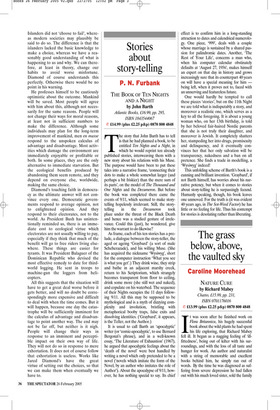 THE BOOK OF TEN NIGHTS AND A NIGHT by John Barth Atlantic Books, £16.99, pp. 295, ISBN 1843544067 ✆ £14.99 (plus £2.25 p&p) 0870 800 4848 The story that John Barth has to tell is that he had planned a book, to be entitled Ten Nights and a Night, in which he would reprint ten already published stories, interweaving them with a new story about his relations with his Muse. The purpose would have been to put these tales into a narrative frame, ‘connecting their dots to make a whole somewhat larger (and perhaps a bit friskier) than the mere sum of its parts’, on the model of The Thousand and One Nights and the Decameron. But before the book was completed there came the events of 9/11, which seemed to make storytelling hopelessly irrelevant. Still, the storytelling in the Decameron took place under the threat of the Black Death and hence was a studied gesture of irrelevance. Could this (just), he wondered, give him the warrant to do likewise?

As frame, each of his ten stories has a prelude, a dialogue between the story-teller, the aged or ageing ‘Graybard’ (a sort of male Scheherazade), and his willing Muse. (She has acquired the nickname ‘Wysiwyg’, short for the computer instruction ‘What you see is what you get’.) They drink wine, they strip and bathe in an adjacent marshy creek, return to his Scriptorium, which strangely becomes transparent from floor to ceiling, drink some more (she still wet and naked), and copulate on his waterbed. The sequence of their Nights occupies the 11 days following 9/11. All this may be supposed to be mythological and is a myth of dizzying complexity and involution, bristling with metaphorical booby traps, false exits and dissolving identities. (‘Graybard’, it appears, is the Teller, not the Author.) It is usual to call Barth an ‘apocalyptic’ writer (or ‘comic-apocalyptic’, to use Bernard Bergonzi’s phrase), and in a well-known essay, ‘The Literature of Exhaustion’ (1967), he argued that apocalyptic feelings about the ‘death of the novel’ were best handled by writing a novel which only pretended to be a novel (‘novels which imitate the form of the Novel, by an author who imitates the role of Author’). About the apocalypse of 9/11, however, he has nothing special to say. Its chief effect is to confirm him in a long-standing attraction to dates and calendrical numerology. One piece, ‘999’, deals with a couple whose marriage is sustained by a shared passion for palindromic dates. Another, ‘The Rest of Your Life’, concerns a man who, when his computer calendar obstinately defaults at ‘August 27, 1956’, makes himself an expert on that day in history and grows increasingly sure that its counterpart 40 years on will have a special meaning for him being left, when it proves not to, faced with an unnerving and featureless future.

One would hardly be tempted to call these pieces ‘stories’, but on the 11th Night we are told what is indisputably a story, and moreover a realistic one, which serves as a key to all the foregoing. It is about a young woman who, on her 13th birthday, is told by her beloved fair-haired Nordic parents that she is not truly their daughter, and moreover is Jewish. It completely shatters her, stampeding her into drugs, promiscuity and delinquency, and it eventually convinces her that her only salvation will be transparency, nakedness and a ban on all pretence. She finds a trade in modelling, a ‘Wysiwyg’ indeed!

This unfolding scheme of Barth’s book is a cunning and brilliant invention. ‘Graybard’, if not Barth himself, has worries about his narrative potency, but when it comes to stories about story-telling he is surpassingly fecund. Humanly speaking, though, his book leaves one unmoved. For the truth is (it was evident 40 years ago, in The Sot-Weed Factor) he has little or no feeling for life. Thus his contempt for stories is desolating rather than liberating.