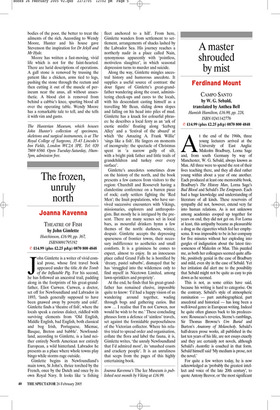 THEATRE OF FISH by John Gimlette Hutchinson, £16.99, pp. 367, ISBN0091795192 ✆ £14.99 (plus £2.25 p&p) 0870 800 4848 John Gimlette is a writer of vivid comical prose, whose first travel book appeared under the title At the Tomb of the Inflatable Pig. For his second, he has followed an ancestral trail, padding along in the footprints of his great-grandfather, Eliot Curwen. Curwen, a doctor, set off for Newfoundland and Labrador in 1893, ‘lands generally supposed to have been gnawed away by poverty and cold’. Gimlette finds a ‘theatre of fish’, where the locals speak a curious dialect, riddled with surviving elements from ‘Old English, Middle English, bad English, both classical and bog Irish, Portuguese, Micmac, Basque, Breton and babble’. Newfoundland, according to Gimlette, is a land neither entirely North American nor entirely European, a wild hinterland. Labrador he presents as a place where whole towns play bingo while storms rage outside.

Gimlette begins in Newfoundland’s main town, St John’s, thrice torched by the French, once by the Dutch and once by its own Royal Navy. It looks like ‘a fishing fleet anchored to a hill’. From here, Gimlette wanders from settlement to settlement, arrangements of shacks lashed by the Labrador Sea. His journey reaches a northerly nadir in a place called Nain, synonymous apparently with ‘pointless, motiveless slaughter’, in which seasonal depression turns to murder and suicide.

Along the way, Gimlette mingles ancestral history and humorous anecdote. It supplies a useful source of contrast: the dour figure of Gimlette’s great-grandfather wandering along the coast, administering check-ups and cures to the locals, with his descendant casting himself as a travelling Mr Bean, sliding down slopes and falling on his head into piles of mud. Gimlette has a knack for colourful phrases: he describes a local ferry as an ‘ark of exotic misfits’ floating along ‘Iceberg Alley’ and a ‘festival of the absurd’ at which ‘the Amazing A. Frank Willie’ ‘sings like a fish’. He lingers on moments of incongruity: the spectacle of Christmas spent in ‘a narrow gully of silt, with a bright pink father and little trails of grandchildren and turkey over every surface’.

Gimlette’s anecdotes sometimes draw on the history of the north, and the book presents a few cameos from visitors to the region: Churchill and Roosevelt having a clandestine conference on a barren piece of rock; early settlers fighting the ‘Red Men’; the Inuit populations, who have survived successive encounters with Vikings, missionaries, explorers and anthropologists. But mostly he is intrigued by the present. There are many scenes set in local bars, as mournful drinkers hymn a few themes of the north: darkness, winter, despair. Gimlette accepts the depressing sparseness of frontier towns, their necessary indifference to aesthetics and small comforts. It is a griminess he comes to expect, almost to enjoy. In an innocuous place called Grand Falls he is horrified by ‘dreary, pastel suburbs’, dismayed that he has ‘struggled into the wilderness only to find myself in Nicetown Limited, among lawn-sprinklers and propriety’.

At the end, he finds that his great-grandfather has remained elusive, impossible quite to know: ‘I’d had a happy vision of us wandering around together, wading through bogs and gathering curios. But now ... I realise that I’m not Curwen, nor would he wish to be me.’ These concluding phrases form a defence of ‘aimless’ travels, set against the formidable purposefulness of the Victorian collector. Where his relative tried to spread order and organisation, collate the flora and label the fauna, it is, Gimlette writes, ‘the unruly Newfoundland that I’d admired most’, its ‘smashed coasts and crackery people’. It is an unruliness that seeps from the pages of this highly entertaining book.