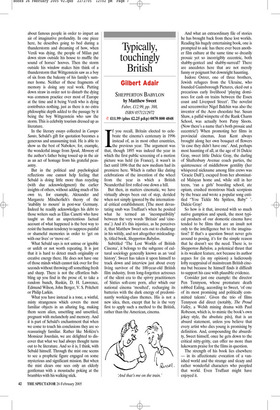 SHEPPERTON BABYLON by Matthew Sweet Faber, £12.99, pp. 388, ISBN 0571212972 ✆ £11.99 (plus £2.25 p&p) 0870 800 4848 If you recall, Britain elected to celebrate the cinema’s centenary in 1996 instead of, as in most other countries, the previous year. The argument was that, though 1895 was indeed the year in which the first public screening of a motion picture was held (in France), it wasn’t in fact until 1896 that the new medium had its premiere here. Which is rather like dating celebrations of the invention of the wheel from the year in which a British Neanderthal first rolled one down a hill.

But then, in matters cinematic, we have virtually always been out of step, derided when not simply ignored by the international critical establishment. (The most devastating snub was Truffaut’s when he posited what he termed an ‘incompatibility’ between the very words ‘Britain’ and ‘cinema’.) And it’s this injustice, as he perceives it, that Matthew Sweet sets out to challenge in his wittily, and not altogether misleadingly, titled book, Shepperton Babylon.

Subtitled ‘The Lost Worlds of British Cinema’, it belongs to the subgenre of cultural sociology generally known as an ‘oral history’. Sweet has taken it upon himself to track down and interview just about every living survivor of the 100-year-old British film industry, from long-forgotten actresses of the silent era to the spivvy practitioners of Sixties soft-core porn, after which our national cinema ‘moulted’, recharging its batteries with the dark energy of predominantly working-class themes. His is not a new idea, then, except that he is the very first to apply such a method to the British, rather than the American, cinema. And what an extraordinary file of stories he has brought back from these lost worlds. Reading his hugely entertaining book, one is prompted to ask: has there ever been another film culture at the same time so drearily prosaic yet so incorrigibly eccentric, both shabby-genteel and shabby-surreal? There are anecdotes here that are not merely funny or poignant but downright haunting.

Isidore Ostrer, one of three brothers, Jewish refugees from the Ukraine, who founded Gainsborough Pictures, eked out a precarious early livelihood ‘playing dominoes for cash on trains between the Essex coast and Liverpool Street’. The novelist and screenwriter Nigel Balchin was also the inventor of the Aero chocolate bar. Susan Shaw, a pallid wimpette of the Rank Charm School, was actually born Patsy Sloots. (Now there’s a name that’s both prosaic and eccentric!) When promoting her films in provincial cinemas, Jean Kent always brought along her own bouquet of flowers ‘in case they didn’t have one’. And, perhaps most haunting of all, at the age of 16 Dulcie Gray, sweet little Dulcie Gray, the darling of Shaftesbury Avenue coach parties, the quintessence of middlebrow gentility (her whispered nickname among film crews was ‘Gracie Dull’), escaped from her abominated Malayan home and, while still in her teens, ‘ran a girls’ boarding school, ate opium, crushed monstrous black scorpions by the brace and wrote a popular song entitled “You Tickle Me Spitless, Baby” ’. Dulcie Gray!

So how is it that, invested with so much native gumption and spunk, the most typical products of our domestic cinema have tended to be films that are an insult not only to the intelligence but to the imagination? If that’s a question Sweet never gets around to posing, it’s for the simple reason that he doesn’t see the need. There is, to Shepperton Babylon, a polemical thrust that is its weakest feature, not because its author argues for (in my opinion) a ludicrously lofty reappraisal of mainstream British cinema but because he himself finds it difficult to support his case with plausible evidence.

Consider just one example: the director Pen Tennyson, whose premature death robbed Ealing, according to Sweet, ‘of one of its most promising and politically committed talents’. Given the trio of films Tennyson did direct (notably, The Proud Valley, a Welsh mining drama with Paul Robeson, which is, to mimic the book’s own jokey style, the absolute pits), that is an absurd statement, unless you believe that every artist who dies young is promising by definition. And, compounding the absurdity, Sweet himself, once he gets down to the critical nitty-gritty, can offer no more than lukewarm praise for the films in question.

The strength of his book lies elsewhere — in its affectionate evocation of a vanished world and the strange and sleazy and rather wonderful characters who peopled that world. Even Truffaut might have enjoyed it.