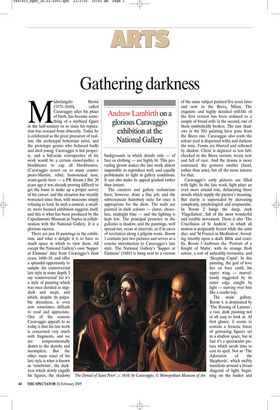 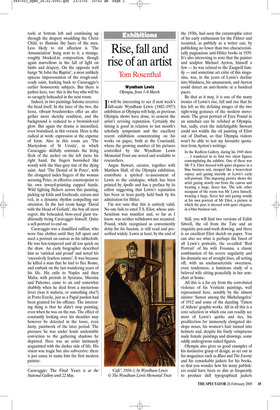 Andrew Lambirth on a glorious Caravaggio exhibition at the National Gallery

Michelangelo Merisi (1571–1610), called are temperamentally drawn to the sketchy and incomplete. But the other main tenet of his late style is what is known as ‘tenebrism’, the darkness which slowly engulfs his figures, the shadowy backgrounds in which details only — of face or clothing — are highly lit. This pervading gloom makes the late work almost impossible to reproduce well, and equally problematic to light in gallery conditions. It can also make its appeal gradual rather than instant.

The curators and gallery technicians have, however, done a fine job, and the subterranean Sainsbury suite for once is appropriate for the show. The walls are painted in dark colours — claret, chocolate, midnight blue — and the lighting is kept low. The principal presence in the galleries is shadow, and the paintings, well spread out, occur at intervals, as if in caves of revelation along a pilgrim route. Room 1 contains just two pictures and serves as a concise introduction to Caravaggio’s late style. The National Gallery’s ‘Supper at Emmaus’ (1601) is hung next to a version of the same subject painted five years later and now in the Brera, Milan. The exquisite and highly detailed still-life of the first version has been reduced to a couple of bread rolls in the second, one of them symbolically broken. The cast shadows in the NG painting have gone from the Brera one. Caravaggio also cools the colour (red is dispensed with) and darkens the tone. Forms are blurred and softened by shadow. Christ is depicted as less fullcheeked in the Brera version, weary now and full of care. And the drama is more contained, the gestures smaller (hand, rather than arm), but all the more intense for that.

Caravaggio’s early pictures are filled with light. In the late work, light plays an even more crucial role, delineating those details which supply the picture’s meaning. But clarity is superseded by increasing complexity, psychological and crepuscular. In Room 2 hangs the deep, dark ‘Flagellation’, full of the most wonderful and terrible movement. There is also ‘The Crucifixion of St Andrew’, in which all motion is poignantly frozen while the saint dies, and ‘St Francis in Meditation’, brooding intently upon a skull, Bible and crucifix. Room 3 harbours the ‘Portrait of a Knight of Malta’, with its strange flesh colour, a sort of unhealthy terracotta, and ‘Sleeping Cupid’. In this painting, the god of love lies on bare earth, his upper wing — marvellously suggested by its outer edge caught by light — curving over him like a cradle-top.

The main gallery, Room 4, is dominated by ‘The Raising of Lazarus’, a vast, dark painting not at all easy to look at. At first glance, it seems to contain a frenetic frieze of grimacing figures set in a shallow space, but in fact it’s a spectacular picture which needs time to cast its spell. Not so ‘The Adoration of the Shepherds’, which swiftly manifests around a broad diagonal of light, beginning on the basket and tools at bottom left and continuing up through the drapery swaddling the Christ Child, to illumine the faces of the men. Less likely to stir affection is ‘The Annunciation’ hung next to it, a strange, roughly blocked-in composition, though again marvellous in the fall of light on limbs and drapery. On the opposite wall hangs ‘St John the Baptist’, a most unlikely epicene impersonation of the rough-andready saint, harking back to Caravaggio’s earlier homoerotic subjects. But there is pathos here, too: this is the boy who will be so savagely beheaded in the next room.

Indeed, in two paintings Salome receives the head itself. In the later of the two, the loose, vibrant brushstrokes offer an altogether more sketchy rendition, and the background is reduced to a brownish-red glow. But again the drama is intensified, even brutalised, in this version. Here is the radical at work: expression at the expense of form. Also in this room are ‘The Martyrdom of St Ursula’, in which Caravaggio skilfully contrasts the living flesh of the archer on the left (note his right hand, the fingers burnished like wood) with the blue-grey tint of the dying saint. And ‘The Denial of St Peter’, with the elongated index fingers of the woman accusing Peter, in effective counterpoint to his own inward-pointing cupped hands. Wild lighting flickers across this painting, picking up folds and foreheads, cuirass and veil, in a dynamic rhythm compelling our attention. In the last room hangs ‘David with the Head of Goliath’, the boy all stern regret, the beheaded, boss-eyed giant traditionally being Caravaggio himself. Quite a self-portrait to end on.

Caravaggio was a dandified ruffian, who wore fine clothes until they fell apart and used a portrait on canvas as his tablecloth. He was hot-tempered and all too quick on the draw. An early biographer described him as ‘satirical and proud’ and noted his ‘excessively fearless nature’. It was because he killed a man that he had to flee Rome, and embark on the last wandering years of his life. His exile to Naples and then Malta, with periods in Syracuse, Messina and Palermo, came to an end somewhat shabbily when he died from a mysterious fever (was it malaria, or something else?) in Porto Ercole, just as a Papal pardon had been granted for his offence. The interesting thing is that he didn’t stop painting, even when he was on the run. The effect of constantly looking over his shoulder may however be detected in the loose, even hasty, paintwork of the later period. The pressure he was under lends undeniable conviction to the gathering shadows he depicted. Here was an artist intimately acquainted with the darker side of life. His vision was tragic but also subversive: there is just cause to name him the first modern painter.