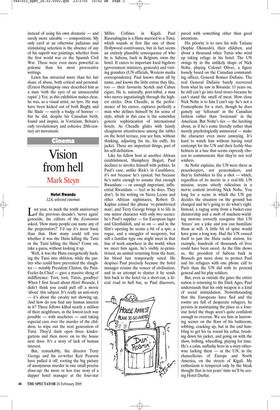 Hotel Rwanda 12A, selected cinemas Last year, to mark the tenth anniversary of the previous decade’s ‘never again’ genocide, the editors of the Economist asked, ‘How many people can name any of the perpetrators?’ I’d say it’s more basic than that. How many could tell you whether it was the Hutu killing the Tutsi or the Tutsi killing the Hutu? Come on, take a guess, without looking it up.

Well, it was the Hutu energetically hacking the Tutsi into oblivion, while the parties who could have prevented the slaughter — notably President Clinton, the PainFeeler-In-Chief — gave a massive shrug of indifference: Toot, toot, Tutsis, goodbye! When I first heard about Hotel Rwanda, I didn’t think you could pull off a movie ‘about’ this subject. It’s really an anti-story — it’s about the cavalry not showing up. And how do you find any human interest in it? These fellows killed nearly a million of their neighbours, in the lowest-tech way possible — with machetes — and taking especial care over the murder of the children, to wipe out the next generation of Tutsi. They’d slash open three kindergartens and then move on to the house next door. It’s a story of lack of human interest.

But, remarkably, the director Terry George and his co-writer Keir Pearson have pulled it off, rooting the big picture of anonymous murder in one small precise close-up: the more or less true story of a dapper hotel manager at the four-star Milles Collines in Kigali. Paul Rusesabagina is a Hutu married to a Tutsi, which sounds at first like one of those Hollywood contrivances, but in fact seems an entirely plausible consequence of who he is. Sabena, back in Belgium, owns the hotel. It caters to important local bigshots (government ministers, generals) and visiting grandees (UN officials, Western media correspondents). Paul knows them all by name, and knows the little extras they like, too — their favourite Scotch and Cuban cigars. He is, naturally, post-tribal, a man who moves ingratiatingly through the highest circles. Don Cheadle, in the performance of his career, captures perfectly a man who defines himself by his sense of style, which in this case is the somewhat generic sophistication of international hotels. As Cheadle glides with faintly oleaginous attentiveness among the tables on the hotel terrace, you see him, without thinking, adjusting his tie, his cuffs, his jacket. These are important things, part of his self-definition.

Like his fellow host at another African establishment, Humphrey Bogart, Paul declines to involve himself with politics. In Paul’s case, unlike Rick’s in Casablanca, it’s not because he’s cynical, but because he’s naïve enough to assume that enough Rwandans — or enough important, influential Rwandans — feel as he does. They don’t. In his writing on Sierra Leone and other African nightmares, Robert D. Kaplan coined the phrase ‘re-primitivised man’, and Terry George brings it to life in one minor character with only two scenes: he’s Paul’s supplier — for European lager and Glenfiddich, and so on — and in the film’s opening he seems a bit of a spiv, a rogue, and a smuggler of weaponry, but still a familiar type one might meet in that line of work anywhere in the world; when we meet him again, he’s visibly re-primitivised, an animal returning from the hunt, his blood lust temporarily sated. He despises Paul precisely because the hotel manager retains the veneer of civilisation, and in an attempt to shatter it he sends him back to the hotel via a short-cut, a literal road to hell but, as Paul discovers, paved with something other than good intentions.

His priority is to save his wife Tatiana (Sophie Okonedo), their children, and about a thousand other Tutsis who wind up taking refuge in his hotel. The UN swings by in the unlikely shape of Nick Nolte, playing Colonel Oliver, a figure loosely based on the Canadian commanding officer, General Romeo Dallaire. The real General Dallaire barely recovered from what he saw in Rwanda: 11 years on, he still can’t go into food stores because he can’t stand the smell of meat. How close Nick Nolte is to him I can’t say: he’s not a Francophone for a start, though he does gamely say ‘leftenant’ in the Canadian fashion rather than ‘lootenant’ in the American. But Nolte’s tics — the lurching about, as if he’s come literally rather than merely psychologically unmoored — make the character even more annoying. It’s hard to watch him without having total contempt for the UN and their feeble blue helmets in a hue that seems expressly chosen to communicate that they’re not real soldiers.

As Nolte explains, the UN were there as peacekeepers, not peacemakers, and they’re forbidden to fire a shot — which, regardless of its merits in a real-life UN mission, seems utterly ridiculous in a movie context involving Nick Nolte. You long for a scene in which the UN guy decides the situation on the ground has changed and he’s going to do what’s right. Instead, a ragtag army from a basket-case dictatorship and a mob of machete-wielding morons correctly recognise that UN ‘forces’ are a joke and you can humiliate them at will. A little bit of spine would have gone a long way. Had the UN roused itself to jam the Hutu radio station, for example, hundreds of thousands of lives could have been saved. As the film shows us, the president of Sabena back in Brussels got more done to protect Paul and his refugees with one phone call to Paris than the UN did with its pretend general and his play soldiers.

But, even as outside the gates the entire nation is returning to the Dark Ages, Paul understands that his only weapon is a kind of social intimidation. Notwithstanding that the Europeans have fled and the rooms are full of desperate refugees, he persists in maintaining the place as a fourstar hotel the thugs aren’t quite confident enough to overrun. We see him in harrowing scenes on the floor of his bathroom, sobbing, cracking up, but in the end fumbling to get his tie round his collar, brushing down his jacket, and going on with the show, bribing, wheedling, playing for time. He’s a calm, unflashy hero in a story otherwise lacking them — at the UN, in the chancelleries of Europe and North America, on the streets of Kigali. My enthusiasm is tempered only by the bleak thought that in ten years’ time we’ll be seeing Hotel Darfur.