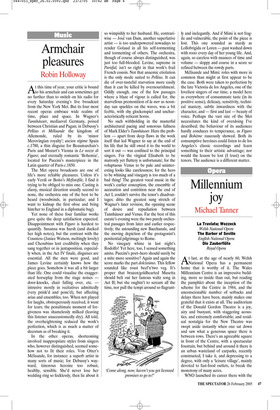 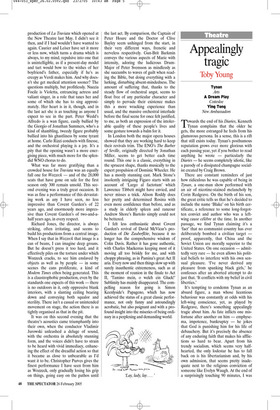 La Traviata; Wozzeck Welsh National Opera The Barber of Seville English National Opera Die Zauberflöte Royal Opera At last, at the age of nearly 60, Welsh National Opera has a permanent home that is worthy of it. The Wales Millennium Centre is an impressive building, more so inside than out, but reading the pamphlet about the inception of the scheme for the Centre in 1984, and the unconscionable number of setbacks and delays there have been, mainly makes one grateful that it exists at all. The auditorium of the Donald Gordon Theatre is a joy, airy and buoyant, with staggering acoustics, and extremely comfortable; and residual nostalgia for the New Theatre was swept aside instantly when one sat down and saw what a generous space there is between rows. There’s an agreeable square in front of the Centre, with a spectacular fountain, but behind and around it there is an urban wasteland of carparks, recently constructed, I take it, and depressing to a degree, with only a ‘leisure village’, mainly devoted to fast-food outlets, to break the monotony of many acres.

WNO launched its career there with the production of La Traviata which opened at the New Theatre last May. I didn’t see it then, and if I had wouldn’t have wanted to again. Caurier and Leiser have set it more or less now, which turns a drama which is always, to my mind, repulsive into one that is unintelligible, as if a present-day model and tart would bow to the wishes of her boyfriend’s father, especially if he’s as creepy as Verdi makes him. And why doesn’t she get medical attention sooner? The questions multiply, but profitlessly. Nuccia Focile is Violetta, entrancing actress and valiant singer, in a role that taxes her and some of which she has to sing approximately. Her heart is in it, though, and in the last act she is as touching as anyone I expect to see in the part. Peter Wedd’s Alfredo is a wan figure, easily bullied by the Giorgio of Jonathan Summers, who’s a kind of shambling, tweedy figure probably bullied into his ghastliness by some tyrant at home. Carlo Rizzi conducts with finesse, and the orchestral playing is a joy. It’s a pity that the opening wasn’t a more energising piece, with much more for the splendid WNO chorus to do.

What was far more gratifying than a crowded house for Traviata was an equally full one for Wozzeck — and of the 28,000 seats that have gone on sale for the first season only 300 remain unsold. This second evening was a truly great occasion. It was as fine a performance of this devastating work as any I have seen, no less impressive than Covent Garden’s of 22 years ago, and enormously more impressive than Covent Garden’s of two-and-ahalf years ago, in every respect.

Richard Jones, the director, is always striking, often irritating, and seems to build his productions from a central image. When I say that in Wozzeck that image is a can of beans, I can imagine deep groans. But he doesn’t press it too hard, and it effectively piles on the torture under which Wozzeck cracks, to see him enslaved by objects as well as by people — in some scenes the cans proliferate, a kind of Modern Times ethos being generated. This is a claustrophobic production, even by the standards one expects of this work — there is no outdoors in it, only oppressive blank interiors, with a slanting ceiling bearing down and conveying both squalor and sterility. There isn’t a casual or unintended movement on stage, the action there is as tightly organised as that in the pit.

It was on this second evening that the theatre’s acoustics came triumphantly into their own, when the conductor Vladimir Jurowski unleashed a deluge of sound, with the orchestra in absolutely stunning form, and the voices didn’t have to strain to be heard with vivid immediacy, enhancing the effect of the dreadful action so that it became as close to unbearable as I’d want it to be. Christopher Purves gives the finest performance I have seen from him as Wozzeck, only gradually losing his grip on things, going easy on the pathos until the last act. By comparison, the Captain of Peter Hoare and the Doctor of Clive Bayley seem unhinged from the start, in their very different ways, frenetic and nerveless respectively. Gun-Brit Barkmin conveys the various aspects of Marie with intensity, adoring the ludicrous DrumMajor of Peter Svensson as mindlessly as she succumbs to waves of guilt when reading the Bible, but doing everything with a lurking, disturbing absent-mindedness. The amount of suffering that, thanks to the steady flow of orchestral angst, seems to float free of any particular character and simply to pervade their existence makes this a more wracking experience than usual, and the massive orchestral interlude before the final scene for once felt justified, to me, as both an expression of the intolerable quality of these people’s lives and some gesture towards a balm for it.

In London both the major opera houses showed that they are working hard to keep their revivals trim. The ENO’s The Barber of Seville, originally directed by Jonathan Miller, seems to get better each time round. This one is a classic, everything in the sprucest shape, thanks musically to the expert propulsion of Dominic Wheeler. He has a mostly stunning cast. Mark Stone’s insolently intriguing Figaro starts with an account of ‘Largo al factotum’ which Lawrence Tibbett might have envied, and never misses a trick. Alison Roddy does her pretty and determined Rosina with even more confidence than before, and as a study in elderly spleen and rancour Andrew Shore’s Bartolo simply could not be bettered.

I felt less enthusiastic about Covent Garden’s revival of David McVicar’s production of Die Zauberflöte, because it no longer has the comprehensive wisdom of Colin Davis. Rather it has gone authentic, with Charles Mackerras keeping most of it moving all too briskly for me, and with choppy phrasing, as in Pamina’s great Act II aria. Every now and then things slow up with surely inauthentic extremeness, such as at the moment of reunion in the finale to Act II, ‘Tamino mein, o welch ein Gluck!’ Sublimity has mainly disappeared. The compelling reason for going is Simon Keenlyside’s Papageno, which has now achieved the status of a great classic performance, not only funny and astoundingly acrobatic, but also poignant and with a profound insight into the miseries of being ordinary in a perplexing and demanding world.