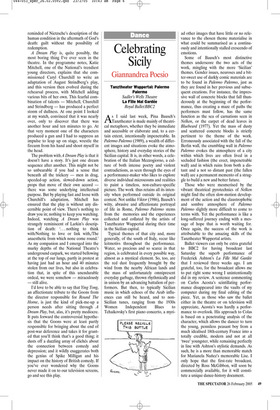 Tanztheater Wuppertal: Palermo Palermo Sadler’s Wells Theatre La Fille Mal Gardée Royal Ballet/BBC2 As I said last week, Pina Bausch’s Tanztheater is made mainly of theatrical metaphors, whether they be immediate and accessible or elaborate and, to a certain extent, intentionally impenetrable. In Palermo Palermo (1989), a wealth of different images and situations evoke the atmosphere, history and everyday stories of the Sicilian capital. It is, in other words, a celebration of the Italian Mezzogiorno, a culture of both intense poetry and violent contradictions, as seen through the eyes of a performance-maker who likes to explore diverse individual microcosms and realities to paint a timeless, non-culture-specific picture. The work thus retains all its intensity when performed outside its original context. Not unlike Viktor (1986), Bausch’s witty, abrasive and affectionate portrayal of life in Rome, Palermo Palermo stems from the memories and the experiences collected and collated by the artists of Tanztheater Wuppertal during their time in the Sicilian capital.

Typical themes of that city and, more generally, of the south of Italy, recur like leitmotivs throughout the performance. Water, so precious and so scarce in that region, is celebrated in every possible way, almost as a mystical element. So, too, are the red dust frequently brought by the wind from the nearby African lands and the mass of unfortunately omnipresent everyday garbage, thrown rhythmically and in unison by an advancing battalion of performers. But then, to typically Sicilian music in which echoes of the Arab influences can still be heard, and to nonSicilian tunes, ranging from the 1930s Women Independent Blues to Tchaikovsky’s first piano concerto, a myri ad other images that have little or no relevance to the chosen theme materialise in what could be summarised as a continuously and intentionally stalled crescendo of emotions.

Some of Bausch’s most distinctive themes underscore the two acts of the work, mingling with the more ‘Sicilian’ themes. Gender issues, neuroses and a bitter-sweet use of darkly comic materials are to be found in Palermo Palermo, just as they are found in her previous and subsequent creations. For instance, the impressive wall of concrete blocks that fall thunderously at the beginning of the performance, thus creating a maze of paths the performers must follow, has the same function as the sea of carnations seen in Nelken, or the carpet of dead leaves in Bluebeard (1977). Yet the mass of dusty and scattered concrete blocks is strictly pertinent to the theme of the work. Erroneously associated with the fall of the Berlin wall, the crumbling wall in Palermo Palermo evokes the atmosphere of a city within which lives are often lived in a secluded fashion (the erect, impenetrable wall) and in which ruins from both a distant and a not so distant past (the fallen wall) are a permanent memento of a struggle to build a new and better future.

Those who were mesmerised by the vibrant theatrical pyrotechnics of Nelken might find the often slow-motion development of the action and the claustrophobic and sombre atmosphere of Palermo Palermo slightly more difficult to come to terms with. Yet the performance is like a long-suffered journey ending with a message of hope that is worth waiting for. Once again, the success of the work is attributable to the amazing skills of the Tanztheater Wuppertal artists.

Ballet viewers can only be extra grateful to BBC2 for having broadcast last Saturday the superb performance of Frederick Ashton’s La Fille Mal Gardée that I reviewed three weeks ago. I am grateful, too, for the broadcast allows me to put right some wrong I unintentionally did in my review. A sentence commenting on Carlos Acosta’s scintillating performance disappeared into the vaults of my computer during my final editing of the piece. Yet, as those who saw the ballet either in the theatre or on television will appreciate, Acosta’s was hardly a performance to overlook. His approach to Colas is based on a penetrating analysis of the character, which allows the dancer to turn the young, penniless peasant boy from a much idealised 18th-century France into a totally credible, modern and not at all ‘twee’ youngster, while remaining perfectly in line with Ashton’s stylistic demands. As such, he is a more than memorable match for Marianela Nuflez’s memorable Lise. I only hope that the first-rate broadcast, directed by Ross McGibbon, will soon be commercially available, for it will constitute a unique dance-history document.