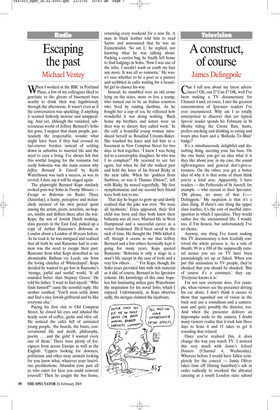 When I worked at the BBC in Portland Place, a few of my colleagues liked to gravitate to the gloom of basement bars nearby to drink their way lugubriously through the afternoons. It wasn’t even as if the conversation was sparkling; if anything it seemed listlessly morose and unappealing. And yet, although the vanished, subterranean world of Jeffrey Bernard’s Soho has gone, I suspect that many people, particularly the respectable, wonder what might have been if they had crossed its tart-strewn borders instead of settling down in suburbia to married life and the need to earn a living. I’ve always felt that this wistful longing for the romantic but seedy bohemia was the main reason why Jeffrey Bernard Is Unwell by Keith Waterhouse was such a success, as was its revival. I dare say it will be staged again.

The playwright Bernard Kops similarly evoked post-war Soho in Twenty Minutes Escape to Bohemia on Radio Three (Saturday), a funny, perceptive and melancholy memoir of his own period spent among the artists, poets, novelists, no-hopers, misfits and drifters there after the war. Kops, the son of Jewish Dutch workingclass parents in the East End, picked up a copy of Arthur Ransome’s Bohemia in London about a London of 40 years before. As he read it, he was intrigued and realised that all both he and Ransome had in common was the need to escape their past: Ransome from what Kops described as ‘an abominable Balham via Leeds, me from the loving clutches of Whitechapel’. Kops decided he wanted to get lost in Ransome’s ‘strange, joyful and sordid’ world. ‘It all sounded better than Stepney Green.’ He told his father, ‘I want to find myself.’ ‘Who finds himself?’ came the scornful reply. His mother soothed, ‘You’ll soon settle down and find a nice Jewish girlfriend and be like everyone else.’ Paying his first visit to Old Compton Street, he closed his eyes and inhaled the heady scent of coffee, garlic and olive oil. He noticed the cafés full of animated young people, ‘the beards, the bums, conversational life and death, philosophy, poetry ... and the girls! I wanted every one of them.’ There were plenty of foreigners from across Europe as well as the English: ‘Uppers looking for downers, politicians and other stray animals looking for you know what, whatever your lascivious predilections. Abandon your past all ye who enter for here you could reinvent yourself.’ Then he caught the bus home, returning every weekend for a new fix. A man in black leather told him to read Sartre and announced that he was an Existentialist. ‘So am I,’ he replied, not knowing what he was talking about. Packing a carrier bag, he finally left home to find lodgings in Soho. ‘Now I was one of the tribe. I needn’t wash or comb my hair any more. It was all so romantic.’ He wasn’t sure whether to be a poet or a painter and scribbled in cafés waiting for a beautiful girl to chance his way.

Instead, he stumbled over an old crone lying on the stairs, more or less a tramp, who turned out to be an Italian countess who lived by raiding dustbins. As he bought her a cup of tea, he reflected how wonderful it was doing nothing. ‘Back home my brothers and sisters were on their way to slavery they called work.’ In the café a beautiful young woman introduced herself as Rosalind Crooms-Baker. She touched his knee and led him to a basement in New Compton Street for two days in bed together. ‘I knew I was being led to a catastrophic slaughter. So who was I to complain?’ He yearned to see her again, but when he did she walked past and held the knee of his friend Ricky at the next table. When his ‘goddess from Surbiton, or was it Thames Ditton?’, left with Ricky, he mused regretfully, ‘My first nymphomaniac and my second best friend were both lost to me.’ That day he began to grow up and slowly realised that the joke was over. ‘We were all layabouts.’ Erica appeared, their first child was born and they both knew their bohemia was all over. Married life in West Hampstead and a successful career as a writer beckoned. He’d been saved in the nick of time. He thought the 1960s killed it off, though it seems to me that Jeffrey Bernard and a few others heroically kept it going for many years. Kops quoted Ransome: ‘Bohemia is only a stage in a man’s life except in the case of fools and a very few others ... ’ For Kops, though, his Soho years provided him with rich material as it did, of course, Bernard in his Spectator column. His knowledge of this once hopeless but fascinating milieu gave Waterhouse the inspiration for his novel Soho, which I enjoyed. Unfortunately, as Kops observes sadly, the morgue claimed the layabouts.