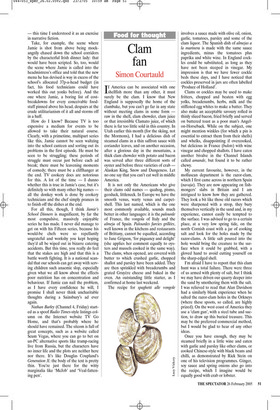 If America can be associated with one shellfish more than any other, it must surely be the clam. I know that New England is supposedly the home of the clambake, but you can’t go far in any state without meeting clams in some form raw in the shell, clam chowder, clam juice or that irresistible Clamato juice, of which there is far too little sold in this country. In Utah earlier this month (for the skiing, not the Mormons), I had a delicious dish of steamed clams in a thin saffron sauce with coriander leaves, and on another occasion, after a glorious day in the mountains, a thick clam chowder with potato and bacon was served after three different sorts of oyster and before three varieties of crab Alaskan King, Snow and Dungeness. Let no one say that you can’t eat well in middle America.

It is not only the Americans who give their clams odd names — quahog, pismo, geoduck, littleneck. In Europe we have the smooth venus, warty venus and carpetshell. This last named, which is the one most commonly available, sounds much better in other languages: it is the palourde of France, the vongola of Italy and the almeja of Spain. Palourdes farcies grillées, well known in the kitchens and restaurants of Brittany, cannot be equalled, according to Jane Grigson, ‘for piquancy and delight’ (she applies her comment equally to oysters and mussels cooked in the same way). The clams, when opened, are covered with butter to which crushed garlic, chopped shallot and parsley have been added. They are then sprinkled with breadcrumbs and grated Gruyère cheese and baked in the oven. An outstanding little starter, as I confirmed at home last weekend.

The recipe for spaghetti alle vongole involves a sauce made with olive oil, onion, garlic, tomatoes, parsley and some of the clam liquor. The Spanish dish of almejas a la marinera is made with the same sauce ingredients, minus the tomatoes plus paprika and white wine. In England cockles could be substituted, as long as they have not been steeped in vinegar. My impression is that we have fewer cockle beds these days, and I have noticed that cockles preserved in jars are often labelled ‘Produce of Holland’.

Clams or cockles may be used to make fritters, chopped and beaten with egg yolks, breadcrumbs, herbs, milk and the stiffened egg whites to make a batter. They also make an acceptable savoury rolled in thinly sliced bacon, fried briefly and served on buttered toast as a poor man’s Angelon-Horseback. While on the subject, one might mention winkles (for which a pin is essential to extract them from their shells) and whelks, disappointing if overcooked, but delicious in France (bulots) with wine vinegar and chopped shallots. I have eaten another bivalve in the Channel Islands called amande, but found it to be rather chewy.

My current favourite, however, in the molluscan department is the razor-clam, which I first came across in northern Spain (navaja). They are now appearing on fishmongers’ slabs in Britain and I am intrigued to know how they are gathered. They look a bit like those old razors which were sharpened with a strop, they bury themselves vertically in the sand and, in my experience, cannot easily be tempted to the surface. I was advised to go to a certain place, at a very low spring tide, on the north Cornish coast with a jar of cooking salt and look for the holes made by the razor-clams. A little salt poured into the hole would bring the creature to the surface when it could be grabbed, with a gloved hand to avoid cutting yourself on the sharp-edged shell.

I’m afraid I have to report that this clam hunt was a total failure. There were three of us armed with plenty of salt, but I think we may have driven our quarry deeper into the sand by smothering them with the salt. I was relieved to read that Alan Davidson had a similarly blank experience when he salted the razor-clam holes in the Orkneys (where these spoots, so called, are highly prized). On the west coast of America they use a ‘clam gun’, with a steel tube and suction, to draw up this buried treasure. This may be the preferred commercial method, but I would be glad to hear of any other ideas.

Once you have enough, they may be steamed briefly in a little wine and eaten with garlic and parsley like other clams, or cooked Chinese-style with black beans and chilli, as demonstrated by Rick Stein on one of his television programmes. Ginger, soy sauce and spring onions also go into the recipe, which I imagine would be equally good with crab or lobster.