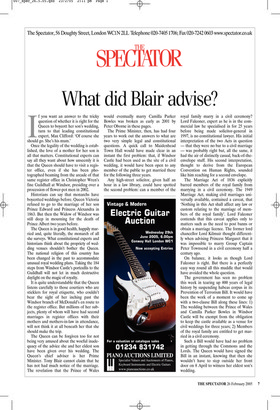 What did Blair advise?

If you want an answer to the tricky question of whether it is right for the Queen to boycott her son’s wedding, turn to that leading constitutional expert, Max Clifford: ‘Of course she should go. She’s his mum.’ Once the legality of the wedding is established, the love of a mother for her son is all that matters. Constitutional experts can say all they want about how unseemly it is that the Queen should have to visit a register office, even if she has been photographed beaming from the arcade of that same register office in Christopher Wren’s fine Guildhall at Windsor, presiding over a procession of flower-pot men in 2002.

Historians can say that monarchs have boycotted weddings before. Queen Victoria refused to go to the marriage of her son Prince Edward and Princess Alexandra in 1863. But then the Widow of Windsor was still deep in mourning for the death of Prince Albert two years before.

The Queen is in good health, happily married and, quite literally, the monarch of all she surveys. What constitutional experts and historians think about the propriety of wedding venues shouldn’t bother the Queen. The national religion of this country has been changed in the past to accommodate unusual royal wedding plans. Taking the 184 steps from Windsor Castle’s portcullis to the Guildhall will not let in much destructive daylight on the magic of royalty.

It is quite understandable that the Queen listens carefully to those courtiers who are sticklers for royal etiquette, who couldn’t bear the sight of her inching past the Windsor branch of McDonald’s en route to the register office. But millions of her subjects, plenty of whom will have had second marriages in register offices with their mothers and mothers-in-law in attendance, will not think it at all beneath her that she should make the trip.

The Queen can be forgiven too for not being very amused about the woeful inadequacy of the advice she and her eldest son have been given over his wedding. The Queen’s chief adviser is her Prime Minister. Tony Blair cannot claim that he has not had much notice of the marriage. The revelation that the Prince of Wales would eventually marry Camilla Parker Bowles was broken as early as 2001 by Peter Oborne in these pages.

The Prime Minister, then, has had four years to work out the answers to what are two very simple legal and constitutional questions. A quick call to Maidenhead Town Hall would have made clear in an instant the first problem: that, if Windsor Castle had been used as the site of a civil wedding, it would have been open to any member of the public to get married there for the following three years.

Any high-street solicitor, given half an hour in a law library, could have spotted the second problem: can a member of the royal family marry in a civil ceremony? Lord Falconer, expert as he is in the commercial law he specialised in for 25 years before being made solicitor-general in 1997, is no constitutional lawyer. His initial interpretation of the two Acts in question — that they were no bar to a civil marriage — was probably right but, all the same, it had the air of distinctly casual, back-of-theenvelope stuff. His second interpretation, thought to derive from the European Convention on Human Rights, sounded like him reaching for a second envelope.

The Marriage Act of 1836 explicitly barred members of the royal family from marrying in a civil ceremony. The 1949 Marriage Act, making civil marriages universally available, contained a caveat, that ‘Nothing in this Act shall affect any law or custom relating to the marriage of members of the royal family’. Lord Falconer contends that this caveat applies only to matters such as the need to post banns or obtain a marriage licence. The former lord chancellor Lord Kilmuir thought differently when advising Princess Margaret that it was impossible to marry Group Captain Peter Townsend in a civil ceremony half a century ago.

On balance, it looks as though Lord Falconer is right. But there is a perfectly easy way round all this muddle that would have avoided the whole question.

The government has seen no problem this week in tearing up 800 years of legal history by suspending habeas corpus in its Prevention of Terrorism Bill. It would have been the work of a moment to come up with a two-clause Bill along these lines: 1) The wedding between the Prince of Wales and Camilla Parker Bowles in Windsor Castle will be exempt from the obligation to keep the castle available as a venue for civil weddings for three years; 2) Members of the royal family are entitled to get married in a civil ceremony.

Such a Bill would have had no problem in getting through the Commons and the Lords. The Queen would have signed the Bill in an instant, knowing that then she wouldn’t have to step outside her front door on 8 April to witness her eldest son’s wedding.