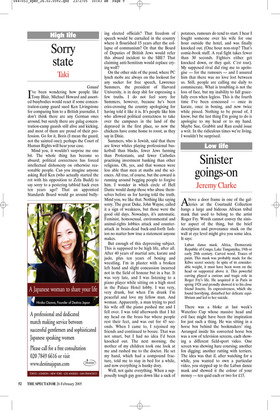 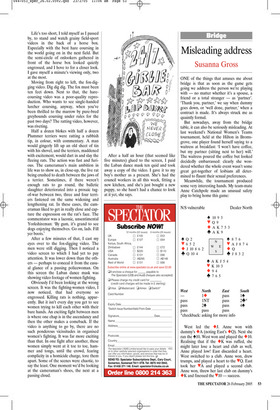 Above a door frame in one of the galleries at the Courtauld Collection hangs a large and hideous African tribal mask that used to belong to the artist Roger Fry. Words cannot convey the sinister aspect of the thing, but the brief description and provenance stuck on the wall at eye level might give you some idea. It says:

Luban dance mask. Africa, Democratic Republic of Congo, Lake Tanganyika, 19th or early 20th century. Carved wood. Traces of paint. This mask was probably made for the Kifwe secret society. In spite of its considerable weight, it must have been worn on the head or supported above it. This powerful carving played a curious and tragic role in Roger Fry’s life. He acquired it in Paris in spring 1924 and proudly showed it to his close friend Josette. Its expressiveness, which she found horrifying, disturbed her delicate equilibrium and led to her suicide.

There was a bloke at last week’s Waterloo Cup whose massive head and evil face might have been the inspiration for just such a thing. He was sitting in a horse box behind the bookmakers’ ring. Arranged inside his converted horse box was a row of television screens, each showing a different field-sport video. One screen was showing hare coursing; another fox digging; another ratting with terriers. The idea was that if, after watching for a while, you wanted to own a particular video, you stepped up to the Luban dance mask and showed it the colour of your money — ten quid each or two for £15. Life’s too short, I told myself as I passed by, to stand and watch grainy field-sport videos in the back of a horse box. Especially with the best hare coursing in the world going on in the next field. But the semi-circle of onlookers gathered in front of the horse box looked quietly engrossed, and I hove to for a closer look. I gave myself a minute’s viewing only, two at the most.

Moving from right to left, the fox-digging video. Dig dig dig. The fox must been ten feet down. Next to that, the harecoursing video was a poor-quality reproduction. Who wants to see single-handed lurcher coursing, anyway, when you’ve been thrilled to the marrow by pure-bred greyhounds coursing under rules for the past two days? The ratting video, however, was riveting.

Half a dozen blokes with half a dozen Plummer terriers were ratting a rubbish tip, in colour, with commentary. A man would gingerly lift up an old sheet of tin with his shovel, and the terriers, maddened with excitement, would dart in and slay the fleeing rats. The action was fast and furious. The cameraman’s main ambition in life was to show us, in close-up, the live rat being crushed to death between the jaws of a terrier. Sometimes, if there weren’t enough rats to go round, the balletic slaughter deteriorated into a prosaic tugof-war between two, three and four terriers fastened on the same widening and lengthening rat. In these cases, the cameraman liked to get in really close and capture the expression on the rat’s face. The commentator was a laconic, unsentimental Yorkshireman: ‘By gum, it’s grand to see dogs enjoying themselves. Go on, lads. Fill yer boots.’ After a few minutes of that, I cast my eyes over to the fox-digging video. The men were still digging. Then I noticed a video screen to which I had yet to pay attention. It was lower down than the others — perhaps to conceal it from the casual glance of a passing policewoman. On this screen the Luban dance mask was showing video footage of women fighting.

Obviously I’d been looking at the wrong screen. It was the fighting-women video, I now noticed, that had everyone so engrossed. Killing rats is nothing, apparently. But it isn’t every day you get to see women trying to kill each other with their bare hands. An exciting fight between men is where one chap is in the ascendancy and then the other makes a comeback. If the video is anything to go by, there are no such ponderous vicissitudes in organised women’s fighting. It was far more exciting than that. In one fight after another, these women simply went at it toe to toe, hammer and tongs, until the crowd, fearing complicity in a homicide charge, tore them apart. Some of the scenes were chaotic, to say the least. One moment we’d be looking at the cameraman’s shoes, the next at a passing cloud. After a half an hour (that seemed like five minutes) glued to the screen, I paid the Luban dance mask ten quid and took away a copy of the video. I gave it to my boy’s mother as a present. She’s had the council workers in all this week, fitting a new kitchen, and she’s just bought a new puppy, so she hasn’t had a chance to look at it yet, she says.