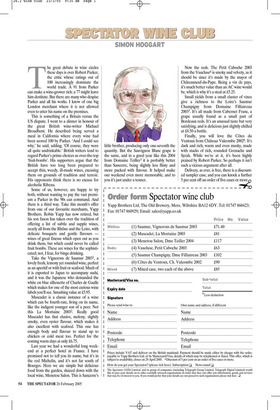 T he great debate in wine circles these days is over

Robert Parker, the critic whose ratings out of 100 increasingly dominate the world trade. A 91 from Parker can make a wine-grower rich; a 77 might leave him destitute. But there are many who despise Parker and all his works. I know of one big London merchant where it is not allowed even to utter his name on the premises.

This is something of a Britain versus the US dispute. I went to a dinner in honour of the great British wine-writer Michael Broadbent. He described being served a meal in California where every wine had been scored 100 by Parker. ‘And I could see why,’ he said, adding, ‘Of course, they were all quite undrinkable.’ British writers tend to regard Parker’s prime choices as over-the-top ‘fruit-bombs’. His supporters argue that the British have too long been prepared to accept thin, weedy, ill-made wines, excusing them on grounds of tradition and terroir. His opponents think there is no excuse for alcoholic Ribena.

Some of us, however, are happy to try both, without wanting to pay the vast premium a Parker in the 90s can command. And there is a third way. Take this month’s offer from one of our favourite merchants, Yapp Brothers. Robin Yapp has now retired, but his son Jason has taken over the tradition of offering a list of subtle and supple wines, nearly all from the Rhône and the Loire, with delicate bouquets and gentle flavours wines of great finesse which open out as you drink them, but which could never be called fruit bombs. These are wines for the sophisticated; not, I fear, for binge drinking.

Take the Vignerons de Saumur 20031, a lovely fresh, lemony yet rounded wine, perfect as an aperitif or with fruit or seafood. Much of it is exported to Japan to accompany sushi, and it was the Japanese who demanded the white on blue silhouette of Charles de Gaulle which makes for one of the most curious wine labels you’ll see. Smashing value at £5.95.

Muscadet is a classic instance of a wine which can be fourth-rate, living on its name, like the indigent younger son of a peer. Not this La Mortaine 20032. Really good Muscadet has that elusive, melony, slightly smoky, even oyster flavour, which makes it also excellent with seafood. This one has enough body and flavour to stand up to chicken or cold meat too. Perfect for the coming warm days at only £6.75.

Last year we had a wonderful long weekend at a perfect hotel in France. I have promised not to tell you its name, but it’s in the red Michelin, and it’s not far south of Bourges. Here we ate simple but delicious food from the garden, sluiced down with the local wine, Menetou Salon. This is Sancerre’s little brother, producing only one-seventh the quantity. But the Sauvignon Blanc grape is the same, and in a good year like this 2004 from Domaine Teiller3 it is probably better than Sancerre, being slightly less flinty and more packed with flavour. It helped make our weekend even more memorable, and to you it’s just under a tenner. Now the reds. The Petit Caboche 2003 from the Vaucluse4 is smoky and velvety, as it should be since it’s made by the mayor of Châteauneuf-du-Pape. Being a vin de pays, it’s much better value than an AC wine would be, which is why it’s a steal at £5.25.

Small yields from a small cluster of vines give a richness to the Loire’s Saumur Champigny from Domaine Filliatreau 20035. It’s all made from Cabernet Franc, a grape usually found as a small part of Bordeaux reds. It’s an unusual taste but very satisfying, and is delicious just slightly chilled at £8.50 a bottle.

Finally, you will love the Côtes du Ventoux from Château Valcombe 20026. It’s dark and rich, warm and even musky, made with stacks of rich, rounded Grenache and Syrah. While we’re at it, it’s been highly praised by Robert Parker. So perhaps it isn’t such a vicious argument after all.

Delivery, as ever, is free, there is a discounted sampler case, and you can knock a further 5 per cent off an order of five cases or more.