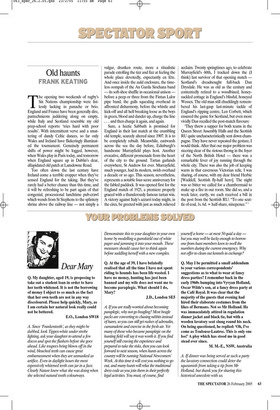 The opening two weekends of rugby’s Six Nations championship were listlessly lacking in panache or brio. England and France have been generally dire, pantechnicons juddering along on empty, while Italy and Scotland resemble my old prep-school reports: ‘tries hard with poor results’. With intermittent verve and a smattering of dandy Celtic dances, so far only Wales and Ireland have flickeringly illuminated the tournament. Genuinely permanent shifts of power might be logged, however, when Wales play in Paris today, and tomorrow when England square up in Dublin’s dear, dilapidated old patch at Lansdowne Road.

Too often down the last century have Ireland come a terrible cropper when they’ve sensed England for the taking. But they’ve rarely had a better chance than this time, and it will be refreshing to be part again of that congenial, processional lunchtime pub-crawl which wends from St Stephens to the splintery shrine above the railway line — not simply a vulgar, drunken route, more a ritualistic parade extolling the tizz and fizz at feeling the whole place devotedly, expectantly en fête. And once inside the auld enclosure, the timeless oompah of the An Garda Siochana band — its soft-shoe shuffle in occasional unison before a peep or three from the Fintan Lalor pipe band, the gulls squealing overhead in affronted disharmony, before the whistle and kick-off and all hell breaking loose as the boys in green, blood and dander up, charge the line ... and then charge it again, and again.

Sure, a hectic Sabbath is promised for England in their last match at the crumbling old temple, scarcely altered since 1907. It is to be completely rebuilt. Meanwhile, eastwards across the sea the day before, Edinburgh’s handsome Murrayfield plays host. Another evocative, different promenade from the heart of the city to the ground. Tartan garlands everywhere, St Andrew for ever. Murrayfield, much younger, had its modern, swish overhaul a decade or so ago. This season, nevertheless, represents a notable four-score anniversary for the fabled paddock. It was opened first for the England match of 1925, a premiere properly graced with a thunderously famous tartan win. A victory against Italy’s azzurri today might, in the circs, be greeted with just as much relieved acclaim. Twenty springtimes ago, to celebrate Murrayfield’s 60th, I tracked down the (I think) last survivor of that opening match — Scotland’s dreadnought full-back Dan Drysdale. He was as old as the century and contentedly retired to a woodbined, honeysuckled cottage in England’s blissful, honeyed Wessex. The old man still chucklingly remembered his last-gasp last-minute tackle of England’s ripping centre, Len Corbett, which ensured the game for Scotland, but even more vividly Dan recalled the post-match flavours: ‘They threw a supper for both teams in the Queen Street Assembly Halls and the Scottish RU quite uncharacteristically sent down champagne. They have never repeated the gesture, I would think. After that our major problem was steering clear of the riotous throng in the foyer of the North British Hotel — there was a remarkable fever of joy running through the whole city. There was also the job of keeping warm in that cavernous Victorian relic. I was sharing, of course, with my dear friend Herbie [Waddell, Scottish fly-half hero]. The night was so bitter we called for a chambermaid to make up a fire in our room. She did so, and a week later, curtly, we each received a bill in the post from the Scottish RU: “To one scuttle of coal, 1s. 6d. = half-share, ninepence.”’