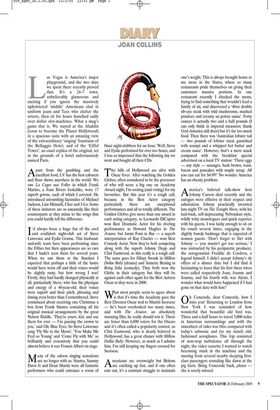 L as Vegas is America’s major playground, and the two days

we spent there recently proved that. It’s a 24–7 town, unbelievably glamorous and exciting if you ignore the massively upholstered ‘middle’ Americans clad in uniform jeans and Tees who clutter the streets, then sit for hours hunched sadly over dollar slot-machines. What a mug’s game that is. We stayed at the Aladdin (soon to become the Planet Hollywood) in a spacious suite with an amazing view of the extraordinary ‘singing’ fountains of the Bellaggio Hotel, and of the ‘Eiffel Tower’, an exact replica of the original, set in the grounds of a hotel unfortunately named Paris.

Apart from the gambling and the excellent food, LV has the best cabarets and floor shows anywhere in the world. We saw La Cages aux Folles in which Frank Marino, a Joan Rivers lookalike, wore 17 superb gowns, each of which I coveted. He introduced astonishing facsimiles of Michael Jackson, Liza Minnelli, Cher and J-Lo. Some of these imitators are so uncannily like their counterparts as they mime to the songs that you could hardly tell the difference.

I’d always been a huge fan of the cool and confident night-club act of Steve Lawrence and Eydie Gorme. This husbandand-wife team have been performing since the Fifties but their appearances are so rare that I hadn’t seen them for several years. When we saw them at the Stardust I expected that perhaps a little of the lustre would have worn off and their voices would be slightly rusty, but how wrong I was! Firstly, they had hardly changed physically at all, particularly Steve, who has the physique and energy of a 40-year-old; their voices were superb and their pitch, phrasing and timing even better than I remembered. Steve reminisced about receiving one Christmas a box from Frank Sinatra containing all his original musical arrangements by the great Nelson Riddle. ‘They’re yours, kid, and use them for ever — I’m passing the crown to you,’ said Ole Blue Eyes. So Steve Lawrence sang ‘Fly Me to the Moon’, ‘You Make Me Feel so Young’ and ‘Come Fly with Me’ so brilliantly and evocatively that you could almost believe it was Francis Albert on stage.

Many of the saloon singing sensations are no longer with us. Sinatra, Sammy Davis Jr and Dean Martin were all fantastic performers who could entrance a room of blasé night-clubbers for an hour. Well, Steve and Eydie performed for over two hours, and I was so impressed that the following day we went and bought all their CDs.

The hills of Hollywood are alive with Oscar fever. After watching the Golden Globes, often considered to be the precursor of who will score a big one on Academy Award night, I’m rooting (and voting) for my favourites. But this year it’s a tough call, because in the Best Actor category particularly there are exceptional performances and all so totally different. The Golden Globes give more than one award in each acting category, so Leonardo DiCaprio won Best Dramatic Actor for his riveting performance as Howard Hughes in The Aviator, but Jamie Foxx in Ray — a superb interpretation of Ray Charles — won Best Comedy Actor. Now they’re both competing along with the superb Johnny Depp and Clint Eastwood, so this really is a tough call. The same goes for Hilary Swank in Million Dollar Baby (drama) and Annette Bening in Being Julia (comedy). They both won the Globe in their category but they will be against each other again for the Best Actress Oscar as they were in 2000.

What most people seem to agree about is that it’s time the Academy gave the Best Director Oscar nod to Martin Scorsese — he’s been overlooked too many times, and with The Aviator, an absolutely stunning film, he really should win it. There are fewer than 6,000 voters for the Oscars and it’s often called a popularity contest, so Clint Eastwood, who is dearly beloved in Hollywood, has a great chance with Million Dollar Baby. However, as much as I admire him, I’m still keeping my fingers crossed for Scorsese.

Americans are overweight but Britons are catching up fast, and if one often eats out, it’s a constant struggle to maintain one’s weight. This is always brought home to me more in the States, where so many restaurants pride themselves on giving their customers massive portions. In one restaurant recently I checked the menu, trying to find something that wouldn’t feed a family of six, and discovered a ‘40oz double rib-eye steak with wild mushrooms, mashed potatoes and creamy au poivre sauce’. Forty ounces is actually two and a half pounds (I can only think in imperial measures; thank God America still does) but it’s far too much food. Then there was ‘Australian lobster tail — two pounds of lobster meat garnished with scampi and a whipped hot butter and cream sauce’. However, that’s a mere snack compared with the breakfast special advertised on a local TV station: ‘Three eggs — any style — sausages, hash brown, toast, bacon and pancakes with maple syrup. All you can eat for $4.99!’ No wonder America has an obesity problem.

America’s beloved talk-show host Johnny Carson died recently and the eulogies were effusive in their respect and admiration. Johnny practically invented late-night TV on The Tonight Show, with his laid-back, self-deprecating Nebraskan style, wildly witty monologues and quick repartee with his guests. I was lucky enough to sit on his couch several times, engaging in the slightly bawdy badinage that is expected of women guests. ‘Don’t forget to flirt with Johnny — you mustn’t get too serious,’ I was instructed by his peripatetic producer, the octogenarian Freddie de Cordova, a legend himself. I didn’t accept Johnny’s sly offers of a dinner date but I did find it fascinating to learn that his first three wives were called respectively Joan, Joanne and Joanna, and his fourth wife was Alexis. I wonder what would have happened if I had gone on that date with him?

Oh Concorde, dear Concorde, how I miss you! Returning to London from New York I was reminded of how wonderful that beautiful old bird was. Three and a half hours to travel 3,000 miles in luxurious surroundings and with the smoothest of rides was bliss compared with today’s subsonic and (to my mind) oldfashioned aeroplanes. This trip consisted of non-stop turbulence all through the night, the video cassette I wanted to watch becoming stuck in the machine and the snoring from several nearby sleeping firstclass passengers sounding like dawn at the pig farm. Bring Concorde back, please she is sorely missed.