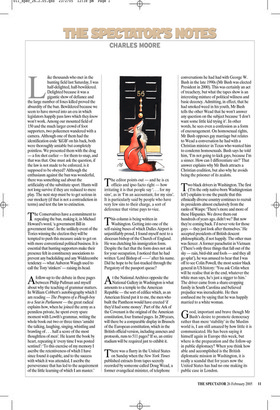 I was half-delighted, half-bewildered. Delighted because it was a gigantic show of defiance and the large number of foxes killed proved the absurdity of the ban. Bewildered because we seem to have moved into an era in which legislators happily pass laws which they know won’t work. Among our mounted field of 150 and the much larger crowd of foot supporters, two policemen wandered with a camera. Although one of them had the identification code ‘KGB’ on his back, both were thoroughly amiable but completely pointless. We presented them with the drag — a fox shot earlier — for them to snap, and that was that. One must ask the question, if the law is not made to be enforced, is it supposed to be obeyed? Although the enthusiasm against the ban was wonderful, there was something sad about the artificiality of the substitute sport. Hunts will not long survive if they are reduced to mere play. The next step must be to get serious in our mockery (if that is not a contradiction in terms) and test the law to extinction.

The Conservatives have a commitment to repealing the ban, making it, in Michael Howard’s word, ‘a government Bill in government time’. In the unlikely event of the Tories winning the election they will be tempted to push this measure aside to get on with more conventional political business. It is essential that hunting supporters make their presence felt in constituency associations to prevent any backsliding and any Widdecombe tendency — what Auberon Waugh used to call the Tory ‘stinkers’ — raising its head.

Afollow-up to the debate in these pages between Philip Pullman and myself about why the teaching of grammar matters. In William Cobbett’s autobiography which I am reading — The Progress of a Plough-boy to a Seat in Parliament — the great radical explains how, when he joined the army as a penniless private, he spent every spare moment with Lowth’s grammar, writing the whole book out two or three times ‘amidst the talking, laughing, singing, whistling and brawling of ... half a score of the most thoughtless of men’. He learnt the book by heart, repeating it ‘every time I was posted sentinel’: ‘To this exercise of my memory I ascribe the retentiveness of which I have since found it capable, and to the success with which it was attended, I ascribe the perseverance that has led to the acquirement of the little learning of which I am master.’ The editor points out — and he is ex officio and ipso facto right — how irritating it is that people say ‘. . . for my sins’, as in ‘I’m an accountant, for my sins’. It is particularly said by people who have very few sins to their charge, a sort of deference that virtue pays to vice.

This column is being written in Washington. Getting into one of the self-raising buses of which Dulles Airport is unjustifiably proud, I found myself next to a diocesan bishop of the Church of England. He was clutching his immigration form. Despite the fact that the form does not ask for your occupation, I noticed that he had written ‘Lord Bishop of ——’ after his name. Did he hope to be fast-tracked through the Purgatory of the passport queue?

At the National Archives opposite the National Gallery in Washington is what amounts to a temple to the American Republic — the sort of edifice which, as an American friend put it to me, the men who built the Pantheon would have erected ‘if they’d had some money’. Part of the Ark of the Covenant is the original of the American constitution, four framed pages. In 200 years, will there be a comparable display in Brussels of the European constitution, which in the British official version, including annexes and protocols, runs to 511 pages? If so, an entire stadium will be required just to exhibit it.

There was a flurry in the United States on Sunday when the New York Times published extracts from tapes secretly recorded by someone called Doug Wead, a former evangelical minister, of telephone conversations he had had with George W. Bush in the late 1990s (Mr Bush was elected President in 2000). This was certainly an act of treachery, but what the tapes show is an interesting mixture of political wiliness and basic decency. Admitting, in effect, that he had smoked weed in his youth, Mr Bush tells the other Wead that he won’t answer any question on the subject because ‘I don’t want some little kid trying it’. In other words, he sees even a confession as a form of encouragement. On homosexual rights, Mr Bush opposes gay marriage but relates to Wead a conversation he had with a Christian minister in Texas who wanted him to condemn homosexuals. Bush says he told him, ‘I’m not going to kick gays, because I’m a sinner. How can I differentiate sin?’ That answer explains why Mr Bush attracts a Christian coalition, but also why he avoids being the prisoner of its zealots.

Two black drivers in Washington. The first (‘I’m the only native-born Washingtonian left’) explains to me the puzzle that this ethnically diverse country continues to recruit its presidents almost exclusively from the ranks of Wasps: ‘There’s more and more of these Hispanics. We drove them out hundreds of years ago, didn’t we? But now they’re coming back. I’d never vote for those guys — they just look after themselves.’ He accepted presidents of British descent philosophically, if not happily. The other man was fiercer. A former parachutist in Vietnam (‘There’s only three things that fall out of the sky — rain, bird-shit and fools — and they all go splat’), he was amused to hear that I was off to see Colin Powell, the most senior black general in US history: ‘You ask Colin when will he realise that in the end, whatever the white man says, he’s just a nigger to him.’ The driver came from a share-cropping family in South Carolina and believed prejudice was ineradicable. He then confused me by saying that he was happily married to a white woman.

Good, important and brave though Mr Bush’s desire to promote democracy rather than mere ‘stability’ in the Muslim world is, I am still amazed by how little it is communicated. He has been saying it himself again in Europe this week, but where is the preparation and the follow-up in public diplomacy? When you think how able and accomplished is the British diplomatic mission in Washington, it is really a scandal that for years now the United States has had no one making its public case in London.