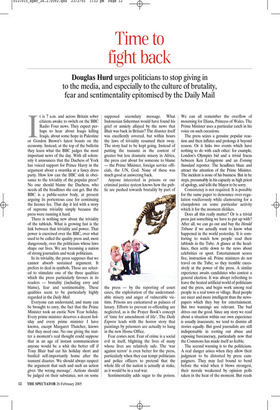 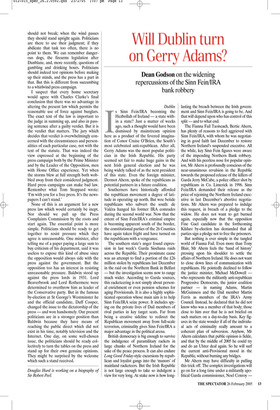 Time to fight back

Douglas Hurd urges politicians to stop giving in to the media, and especially to the culture of brutality, fear and sentimentality epitomised by the Daily Mail It is 7 a.m. and across Britain sober citizens awake to switch on the BBC Radio Four news. They expect perhaps to hear about Iraqis killing Iraqis, about some hope in Palestine or Gordon Brown’s latest boasts on the economy. Instead, at the top of the bulletin they learn what the BBC judges the most important news of the day. With all solemnity it announces that the Duchess of York has voiced support for Prince Harry in the argument about a swastika at a fancy dress party. How low can the BBC sink in obeisance to the triviality of the popular press? No one should blame the Duchess, who needs all the headlines she can get. But the BBC is a public-sector body, at present arguing its portentous case for continuing the licence fee. That day it led with a story of supreme triviality simply because the press were running it hard.

There is nothing new about the triviality of the tabloids. What is growing fast is the link between that triviality and power. That power is exercised over the BBC, over what used to be called the quality press and, most dangerously, over the politicians whose laws shape our lives. We are becoming a nation of strong journalists and weak politicians.

In its triviality, the press supposes that we cannot absorb sustained argument. It prefers to deal in symbols. These are selected to stimulate one of the three qualities which the press particularly favours in its readers — brutality (including envy and blame), fear and sentimentality. These qualities seem to be particularly highly regarded in the Daily Mail.

Everyone can understand, and many can be brought to envy, the fact that the Prime Minister took an exotic New Year holiday. Every prime minister deserves a decent holiday and every prime minister I have known, except Margaret Thatcher, knows that they need one. No one giving the matter a moment’s real thought could suppose that in an age of instant communication anyone would be a whit the better off if Tony Blair had cut his holiday short and bustled self-importantly home after the tsunami disaster. We should always suspect the argument that such and such an action gives ‘the wrong message’. Actions should be judged on their substance, not on some supposed secondary message. What Indonesian fisherman would have found his grief or anxiety allayed by the news that Blair was back in Britain? The disaster itself was excellently covered, but within hours the laws of triviality resumed their sway. The story had to be kept going. Instead of putting the tsunami in the context of greater but less dramatic misery in Africa, the press cast about for someone to blame — the Prime Minister, foreign service officials, the UN, God. None of these was much good at answering back.

Anyone interested in prisons or our criminal justice system knows how the public are pushed towards brutality by part of the press — by the reporting of court cases, the exploitation of the understandable misery and anger of vulnerable victims. Prisons are caricatured as palaces of luxury. Efforts to prevent re-offending are neglected, as is the Prayer Book’s concept of ‘time for amendment of life’. The Daily Express leads with the horror story that paintings by prisoners are actually to hang in the new Home Office.

Fear comes next. Fear of crime is a social evil in itself, blighting the lives of many whose lives are relatively safe. The ‘war against terror’ is even better for the press, particularly when they can tempt politicians and police officers to pretend that the whole life of the nation is actually at stake, as it would be in a real war.

Sentimentality adds sugar to the poison. We can all remember the overflow of mourning for Diana, Princess of Wales. The Prime Minister uses a particular catch in his voice on such occasions.

The press seizes a genuine popular reaction and then inflates and prolongs it beyond reason. Or it links two events which have nothing to do with each other: for example, London’s Olympics bid and a trivial fracas between Ken Livingstone and an Evening Standard reporter. The headlines blaze and attract the attention of the Prime Minister. The incident is none of his business. But in he steps, presumably in his capacity as high priest of apology, and tells the Mayor to be sorry.

Consistency is not required. It is possible for the same paper to denounce over-regulation vociferously while clamouring for a clampdown on some particular activity which it for the moment dislikes.

Does all this really matter? Or is a trivial press just something we have to put up with? After all, we can go out and buy the Herald Tribune if we actually want to know what happened in the world yesterday. It is comforting to watch how people read their tabloids in the Tube. A glance at the headlines, then settle down to the news about celebrities or sport. Entertainment scores five, instruction nil. Prime ministers do not travel on the Tube; so they tremble excessively at the power of the press. A similar experience awaits candidates who contest a general election. It was always refreshing to leave the heated artificial world of politicians and the press, and begin work among real people in a real town or village. Real people are nicer and more intelligent than the newspapers which they buy for entertainment. But two warnings are relevant. The bad drives out the good. Since any story we read about a situation within our own experience is usually inaccurate, we tend to dismiss all stories equally. But good journalists are still indispensable in rooting out abuse and exposing bureaucracy, particularly now that the Commons has made itself so feeble.

The second warning is to the politicians. A real danger arises when they allow their judgment to be distorted by press campaigners. They may feel bound to bend before the wind when it blows strongest, their morale weakened by opinion polls taken in the heat of the moment. But reeds should not break; when the wind passes they should stand upright again. Politicians are there to use their judgment; if they abdicate that task too often, there is no point to them. We can remember dangerous dogs, the firearms legislation after Dunblane, and, more recently, questions of gambling and drinking hours. Politicians should indeed test opinions before making up their minds, and the press has a part in that. But this is different from succumbing to a whirlwind press campaign.

I suspect that every home secretary would agree with Charles Clarke’s final conclusion that there was no advantage in altering the present law which permits the reasonable use of force against burglars. The exact text of the law is important to the judge in summing up, and also in passing sentence after a guilty verdict. But it is the verdict that matters. The jury which decides that verdict is overwhelmingly concerned with the circumstances and personalities of each particular case, not with the text of the statute. That was indeed the view expressed at the beginning of the press campaign both by the Prime Minister and by the Leader of the Opposition, men with Home Office experience. Yet when the storms blew at full strength both wobbled away from their considered judgment. Hard press campaigns can make bad law. Remember what Tom Stoppard wrote: ‘I’m with you for a free press. It’s the newspapers I can’t stand.’ None of this is an argument for a new press law which would certainly be inept. Nor should we pull up the Press Complaints Commission by the roots and start again. The essential point is more simple. Politicians should be ready to get together to resist pressure which they agree is unreasonable. One minister, after telling me of a paper paying a large sum to buy criticism of his department, said it was useless to expose this kind of abuse since the opposition would always side with the press against the government. But the opposition too has an interest in resisting unreasonable pressure. Baldwin stood up against the press lords in 1931. Lord Beaverbrook and Lord Rothermere were determined to overthrow him as leader of the Conservative party. But in the famous by-election at St George’s Westminster he and the official candidate, Duff Cooper, changed the issue to the dictatorship of the press — and won handsomely. Our present politicians are in a stronger position than Baldwin because they have means of reaching the public direct which did not exist in his time, notably television and the Internet. One day, on some well-chosen issue, the politicians should be ready collectively to turn the tables on the press and stand up for their own genuine opinions. They might be surprised by the welcome which such a stand received.

Douglas Hurd is working on a biography of Sir Robert Peel.