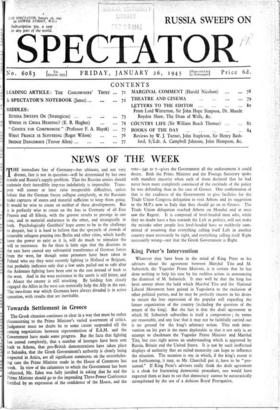 Towards Settlement in Greece

The Greek situation continues to clear in a way that must be rather disconcerting to the Prime Minister's varied assortment of critics. judgement must no doubt be to some Lxtent suspended till the coming negotiations between representatives of E.A.M. and the Government have made some progress. But the facts that fighting has ceased completely, that a number of hostages have been sent back to Athens, that pro-British demonstrations have taken place at Salonika, that the Greek Government's authority is clearly being respected in Attica, are all significant comments on the overwhelm- ing case the Prime Minister made in the House of Commons last week. In view of the calumnies to which the Government has been subjected, Mr. Eden was fully justified in asking that he and the Prime Minister should go to the impending Three-Power Conference fortified by an expression of the confidence of the House, and the

vote-340 to 7—gives the Government all the endorsement it could desire. Both the Prime Minister and the Foreign Secretary spoke with manifest sincerity when each of them declared that he had never been more completely convinced of the rectitude of the policy he was defending than in the case of Greece. One confirmation of that is the readiness of the Government to give facilities for the Trade Union Congress delegation to visit Athens and its suggestion to the M.P.s now in Italy that they should go on to Greece. The Trade Union delegation reached Athens on Monday and at once saw the Regent. It is composed of level-headed men who, while they no doubt have a bias towards the Left in politics, will not make the mistake other people less level-headed have so recklessly com- mitted of assuming that everything calling itself Left in another country must necessarily be right, and everything calling itself Right necessarily wrong—not that the Greek Government is Right.