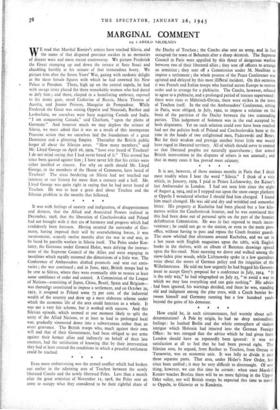 WE read that Marshal Koniev's armies have reached Silesia, and the name of that disputed province awakes in us memories of distant wars and more recent controversy. We picture Frederick the Great stumping up and down the terrace at Sans Souci and chuckling harshly at his seizure of that tremendous booty. We picture him after the Seven Years' War, gazing with sardonic delight

at the three female figures with which he had crowned his New • Palace at Potsdam. There, high up on the central cupola, he had * * * * Even more embarrassing was the armed conflict which had broken out earlier in the adjoining area of Teschen between the newly liberated Czechs and the newly liberated Poles. Less than a month after the great armistice of November ii, 1918, the Poles sent an army to occupy what they considered to be their rightful share of

with savage irony placed the three remarkable women who had dared to flefy him ; and there, clasped in a humiliating embrace, exposed to his ironic gaze, stood Catherine of Russia, Maria Theresa of Austria, and Jeanne Poisson, Marquise de Pompadour. While Frederick the Great was seizing Oppeln and Neustadt, Ratibor and Leobschiitz, we ourselves were busy acquiring Canada and India. "I am conquering Canada," said Chatham, "upon the plains of Germany." And however much we may deplore the seizure of Silesia, we must admit that it was as a result of this intemperate Prussian action that we ourselves laid the foundations of a great Dominion and a glittering Empire. Thereafter the British public forgot all about the Silesian areas. "How many members," said Mr. Lloyd George on April 16, 1919, "have ever heard of Teschen? I do not mind saying that I had never heard of it." This avowal has since been quoted against him ; I have never felt that his critics were either justified or sincere. For why on earth should Mr. Lloyd George, or the members of the House of Commons, have heard of Teschen? The areas bordering on Silesia had not touched our interests or our history for more than a century and a half. Mr. Lloyd George was quite right in saying that he had never heard of Teschen. He was to hear a great deal about Teschen and the Silesian problem in the months that followed.

It was with feelings of anxiety and indignation, of disappointment and distress, that the Allied and Associated Powers realised in December, 1918, that the liberation of Czechoslovakia and Poland had not brought with it that era of harmony and progress which had confidently been foreseen. Having secured the surrender of Ger- many, having imposed their will by overwhelming forces, it was inconvenient, scarcely twelve months after the war to end war, to be faced by guerilla warfare in Silesia itself. The Poles under Kor- fanty, the Germans under General Hofer, were defying the instruc- tions of the Supreme Council of the Allies and were engaging in hostilities which rapidly assumed the dimensions of a little war. The Conference of Ambassadors drafted protocols and sent out emis- saries; the war continued ; and in June, 1921, British troops had to be sent to Silesia, where they were eventually able to restore at least some semblance of order and control. A Commission of the League of Nations—consisting of Japan, China, Brazil, Spain and Belgium— was thereaftsr constituted to impose a settlement, and on October 2o, 1921, it assigned to Poland some 75 per cent, of the industrial wealth of the country and drew up a most elaborate scheme under which the economic life of the area could function as a whole. It was not a very fair scheme, but it worked with success. And this Silesian episode, which seemed at one moment likely to split the unity of the Allied Nations, or at least to lead to prolonged local war, gradually simmered down into a subterranean rather than an overt grievance. The British troops who, much against their own will and that of their Government, had been obliged to use arms against their former allies and indirectly on behalf of their late enemies, had the satisfaction of knowing that by their intervention they had at least created the conditions in which a peaceful settlement could be reached. the Duchy of Teschen ; the Czechs also sent an army, and in fact occupied the town of Bohumin after a sharp skirmish. The Supreme Council in Paris were appalled by this threat of dangerous warfare between two of their liberated allies ; they sent off officers to arrange an armistice ;, they sent off a Commission under M. Noullens to impose a settlement ; the whole process of the Peace Conference was agitated and delayed by this most illiBeral incident. On this occasion it was French and Italian troops who hurried across Europe to restore order and to arrange for a plebiscite. The Czechs, however, refused to agree to a plebiscite, and a prolonged period of tension supervened: there were riots at Mahrisch-Ostrau, there were strikes in the town of Teschen itself. In the end the Ambassadors' Conference, sitting in Paris, were obliged, in July, 5920, to impose a solution on the basis of the partition of the Duchy between the two contending parties. This judgement of Solomon was in the end accepted by both disputants. Yet no such solution could ever have been reached had not the policies both of Poland and Czechoslovakia been at the time in the hands of two enlightened men, Paderewski and Benes. But for their wisdom and prestige another bitter little war would have raged in liberated territory. All of which should serve to remind us that liberated peoples are naturally quarrelsome ; that armed British intervention in the disputes of others is not unusual ; and that in many cases it has proved most salutary.

It is not, however, of those anxious months in Paris that I think most readily when I hear the word "Silesia," I think of a visit which, in January, 1929, I paid to Prince Lichnowsky, the Kaiser's last Ambassador in London. I had not seen .him since the night of August 4, 1914, and as I stepped out upon the snow-swept platform at Oppeln I wondered whether I should find him changed. I found him much changed. He was old and dry and wrinkled and somewhat bitter. His property at Kuchelna had been placed but a few kilo- metres within the Czechoslovak frontier, and he was convinced that this had been done out of personal spite on the part of the frontier delinfitation Co'mmission. He was in fact exposed to much incon- venience; he could not go to the station, or even to the main post- office, without having to pass and repass the Czech frontier guards. The snow whirled that afternoon around Kuchelna, and we sat in a hot room with English magazines upon the table, with English books in the shelves, with an album of Bateman drawings spread upon the fire-stool. Next morning we drove and walked among the snow-laden pine woods, while Lichnowsky spoke in a low querulous voice about the errors of German policy and the iniquities of the Willielmstrasse. He told me how urgently he had begged his Govern- ment to accept Grey's proposal for a conference in July, 1914. "It is the only way," he had telegraphed on July 25, " to avoid a war in which we may lose everything and can gain nothing." His advice had been ignored, his warnings derided, and there he was, standing old and indignant among the pine trees, with a Czech barrier be- tween himself and Germany running but a- few hundred yards beyond the gates of his demesne.

How could he, in such circtunsmnces, feel warmly about self- determination? A Pole by origin, he had no deep nationalistic feelings: he loathed Berlin and the whole atmosphere of violent intrigue which Holstein had injected into the German Foreign Office: he was enraged that the advice which he had given from London should have so repeatedly been ignored: it was no satisfaction at all to feel that he had been proved right. The Silesian area, he argued, from Ratibor to Teschen, from Ostrau to Tarnowitz, was an economic unit. It was folly to divide it into three separate parts. That area, under Hitler's New Order, has since been unified ; it May be very difficult to disentangle. Of one thing, however, we can this time be certain: when once Marshal Koniev Teaches Breslau there will be no more fighting in the Upper Oder valley, nor will British troops be expected this time to travel to Oppeln, to Gleiwitz or to Kandrzin.